Famous Kildare locals honoured by Made of Athy in 2019 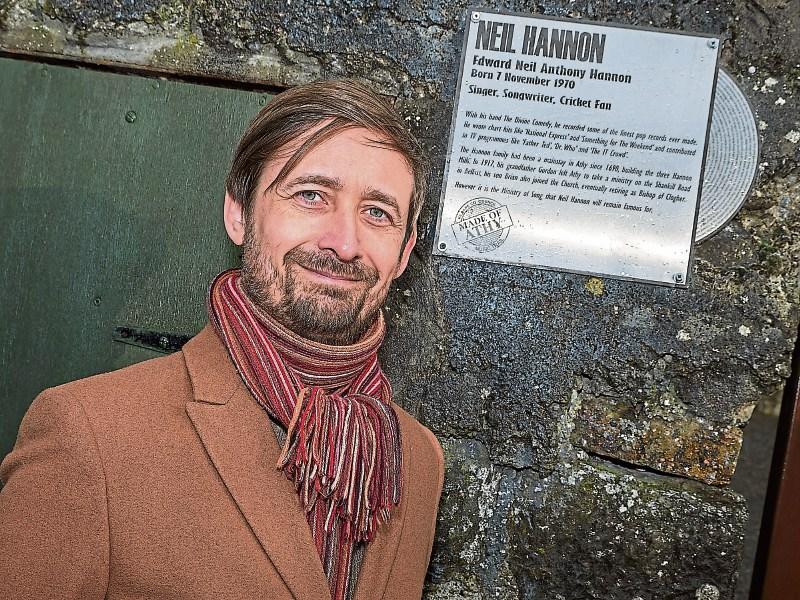 The Made of Athy Project, an iniative which seeks to recognise the links to the south Kildare town of people who have made a contribution to the music business, brought great fun to the town in 2019.

Although not started in 2019, the project made its way through more of the town’s connections this year.

Recipients of plaques as part of the Made of Athy project in previous years have included Johnny Marr of the Smiths, Mani of the Stone Roses and producer Bill Hughes.

First up in 2019, Jack L was honoured by the project in January. It was an emotional moment from the native son who was honoured for his local, national and international success as a musical artist.

The plaque was unveiled in the town’s Garter Lane which is the name of one of his song.

Speaking at the unveiling, which was attended by a large crowd of more than 100, Jack L said it was an honour and a privilege.

“I can’t believe you all came out here. We’re stopping the traffic in Athy. It’s a happy day for me and my family — a great honour.

“I was born in the hospital up the road, so I’m born and bred Athy. My grandfather Jack Keogh drove the ambulances.”

He spoke of Garter Lane and his memories of it as a school boy, and before singing the famous song of the same name, he paid tribute to his parents, Sean and Rose and lead the crowd in a rendition of Happy Birthday for his mother.

Neil Hannon of the Divine Comedy was next.

His family’s ancestral home was at Ardree Lock, just outside Athy on the Carlow road.

The family had three mills, the remains of one of which can still be seen at Levitstown, and employed quite a few people in the area.

Hannon’s paternal grandfather, Gordon, left the area in 1917 for Belfast’s Shankill road to work as a missionary and from there to a parish in Lurgan.

His father, Brian, followed his own father into the religious life and was a minister in the Diocese of Derry and Raphoe and later, Bishop of Clogher.

The singer himself grew up in Enniskillen.

“I’m kind of astonished, taken aback at what a large part of Hannon history is centered around the town.

“Us and the Shackleton’s, we were the big guys, and then we let it all go - typical - and scarpered north!” he joked at the unveiling of his plaque in February.

Earlier in the day he had taken a tour of the museum in the town, and he reflected: “It is strange. I knew about the great uncles who were killed in the first war, but actually seeing them in the roll of honour in the museum and where they were killed — I didn’t know the details.

It turns out that four members of his family perished in the Great War.

In May President Michael D Higgins unveiled a plaque to commemorate the link between legendary songwriter Leonard Cohen and Athy.

The plaque celebrates the collaboration between local writer John MacKenna and Leonard Cohen which resulted in the requiem Between Your Love and Mine.

The requiem was developed in the Athy Community Arts Centre where the plaque was mounted.

Although both men worked closely together on the requiem, MacKenna was unaware how unwell his collaborator, Cohen, was at the time.

The final edit was made weeks before Cohen’s death, and in many ways it had become his own requiem.The requiem was performed in the National Concert Hall in last September on Leonard Cohen’s birthday.

Micheál Ó Dubhshláine, the town’s most successful writer in the Irish language and one of its great historians, was honoured in March.

In his day he wrote many books ranging in subjects from the Blaskets to a history of Kilkea.During his life, he became the subject of national headlines when he became embroiled in an argument with the Department of Education over the closure of a rural Irish speaking school.

He was the former principal of Scoil Náisiúnta Naomh Gobnait, Dún Chaoin, and was at the centre of a local controversy that became a national issue.

One of the plaques erected in 2019 was for all the original bands of the town.

Colm Walsh of the Made of Athy Project explained that it was aimed at bands “who load €5,000 of equipment into a €500 car to go to a €50 gig”.In particular, musicians Ted Ward and Willie Langton were remembered during the unveiling.

Another plaque was unveiled to Thomas Kelly who lived from 1769 to 1855 and was a well known hymn composer. At the age of 23 he abandoned his study of the law to become a clergy man in the Church of Ireland. However he fell foul of the church authorities for his evangelical preaching and at the age of 33 began writing hymns. Over the next 50 years he wrote 765 of them.

A third plaque was erected to the Fife and Drum tradition of the town, where local neighbourhoods in the town had their own bands.

In particular, the Leinster Street Band who changed their name to the Band of the Irish Volunteers (in recognition of the Home Rule Act of 1913), were commemorated.

A picture exists of that band heading to the funeral of O’Donovan Rossa.

The army band played in the town to mark the occasion.

From Barrowhouse, Seamus Malone is one of the most important animators working at the moment having spent many years working with Aardman, which produced, among other things, the Wallace and Gromit series, to developing Shaun the Sheep and more recently Watership Down.

His works have garnered an Oscar, Golden Globe, five BAFTA’s and four Emmy’s. Other films on his CV include Shrek 2, Creature Comforts, Flushed Away and Chicken Run.

A local choir, Beautiful Noise, lead by Shane O’Sullivan sang the theme tune to Shaun the Sheep for Mr Malone at the unveiling of his plaque at Athy College in August, a moment he admitted was “a little bit surreal.” He thanked his parents Jim and Mary as well as his sisters and his auntie Mary who had come all the way from Cork.

He paid tribute to the Made of Athy Project, saying “I always thought it was a fantastic idea, and I had no idea I was going to be involved in it, so I’m very privileged and honoured to be standing here now.”

He spoke of his time in the school with fondness, saying that he was always encouraged by his teachers and friends to draw. “It’s always been a place of inspiration for me. I’ll go back to work next week and I’ll be thinking about this for a long time. I’ve been to a lot of awards shows around the world, but this one is going to be number one!”