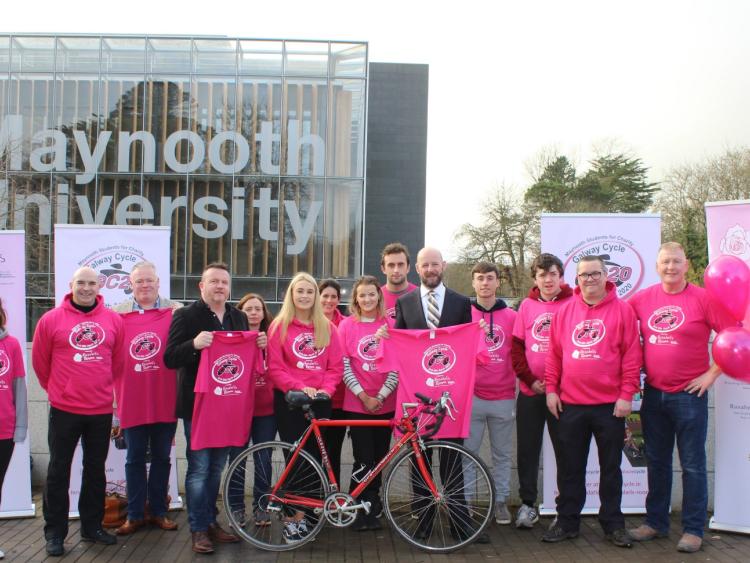 The 33rd annual Galway Cycle will take place as a tribute to Rosabel Monroe who died suddenly and unexpected death at the age of 16 months.
The event, organised by Maynooth Students for Charity, will see up to 300 cyclists take to the road on Friday, April 4, 2020, to pedal from Maynooth University to Galway to raise €120,000 for Rosabel’s Rooms.
The charity aims to develop family-friendly bereavement suites in hospital emergency departments around Ireland.
The bereavement suites provide comfort and dignity for parents and families following the death of a child.
The charity was set up by the parents of Rosabel Monroe, Suzanne McClean and Gary Monroe, following her death.
Since it was first established in 1987 by a group of students at St. Patrick’s College, Maynooth, the annual Galway Cycle has covered more than 13,000 kms of road and raised in excess of €1.7 million for a host of children’s charities.
President of the Galway Cycle, Maynooth University student Aisling McGovern, from Smithstown near Rathcoffey, said that this year’s cycle promises to be the biggest yet.
“We are delighted to partner this year with Rosabel’s Rooms.

“Theirs is a project with a national reach that really touched the hearts of cyclists, past and present all of who play a part in the annual charity nomination and voting process,” she said.
“As well as 300 cyclists, we are hoping to recruit 150 collectors and 100 additional support crew.
“The Galway Cycle is completely volunteer led and managed to ensure that costs are kept to an absolute minimum.”
open to anyone
The Galway Cycle will take place between Friday April 4 and Sunday, April 6 and is open to anyone who would like to take part.
Full information, including a pre-Galway Cycle training schedule and online registration, is available at galwaycycle.ie.