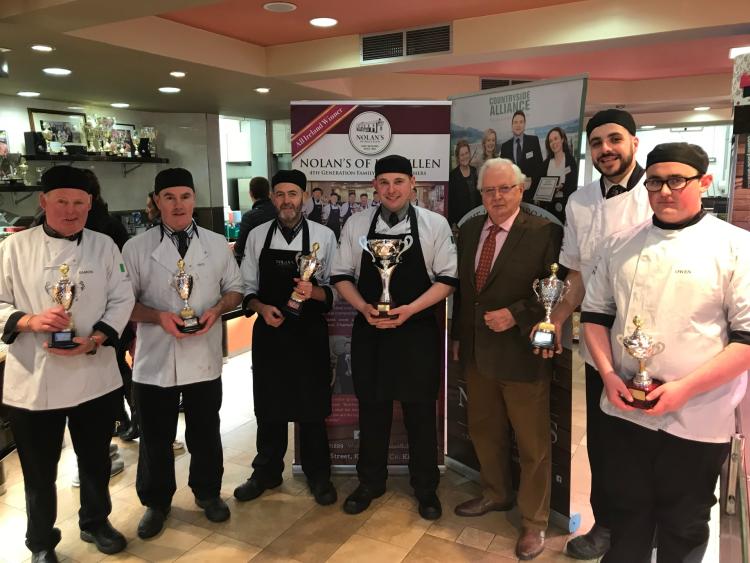 It was another clean sweep for Nolan Butchers of Kilcullen at the Associated Craft Butcher of Ireland finals on Sunday, November 24.

Hosted at Castleknock Hotel, Dublin, Marc Behan won the Supreme Championship in the Speciality Food competition with his pork, cranberry, apple and pistachio festive meat loaf — which the Independent judging panel commented was “simply delicious and perfect when served hot or cold for Christmas.”

Marc was absolutely thrilled to win this all-Ireland title and will have his award winning meat loaf ready for customers in Nolan’s of Kilcullen for the busy festive season ahead. 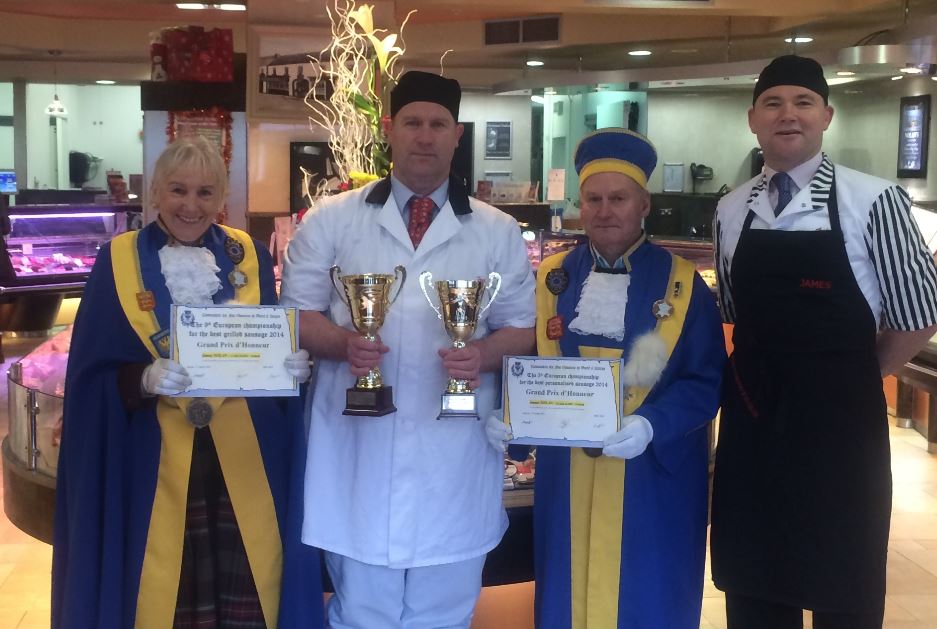 Nolan’s of Kilcullen also picked up five more trophies at the ACBI Awards for their:
*Home made reduced fat pork sausages in the Healthy Lifestyle category
*Home made turkey sausages – which are low in fat and high in protein
*Home made gluten free pork sausages
*Home made chilli pork sausages
*Nolan’s also finished runner up with their traditional home made spiced beef, which is incredibly popular at Christmas.

Fins Goustiers Awards in France
This major success at the Irish National Finals comes just one week after another huge success at the annual Fins Goustiers Awards in France on November 16. Nolan’s of Kilcullen were awarded the main prize for the Best Pork Sausages in Ireland as well as an award for their home made white pudding at the recent awards ceremony in France. James Nolan was quick to give immense praise to Fred Mitchell who makes the sausages and puddings fresh every day.

“Fred has collected numerous National and International awards which is a testament to his high quality work and a positive reflection on the consistency of top class products that are handmade in Nolan’s of Kilcullen" said James Nolan.

Nolan’s of Kilcullen further won another major award for their low salt, home cured and home baked clove and orange ham. James wanted to acknowledge the huge amount of work put in by Dermot Mitchell, Emily Behan and Colin Behan to produce these Christmas hams to such a high standard year after year.

“Indeed, it is all the fantastic team of staff that makes Nolan’s of Kilcullen such a friendly and unique place to shop.
Nolan’s of Kilcullen won the award for the Best Butchers Shop in the UK and Ireland at the House of Lord’s London in 2015 as well as an Outstanding Achievement Award at the World Cup finals for Craft Butchers in Frankfurt, Germany, in May of this year.