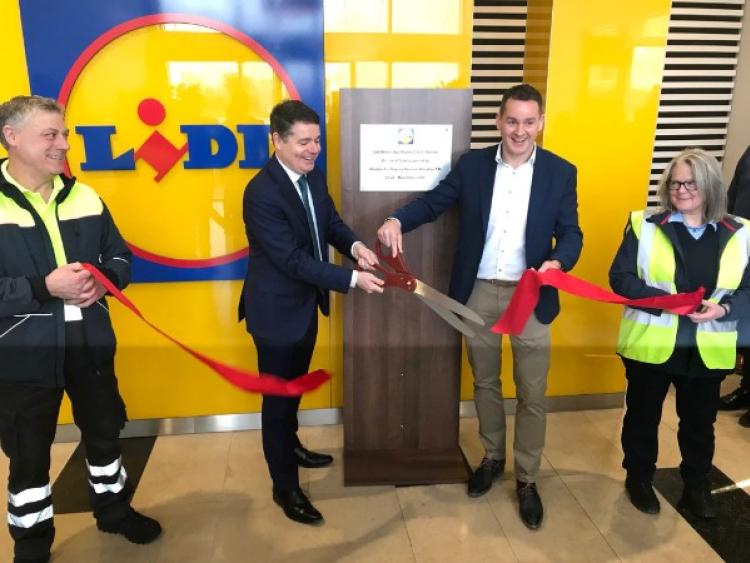 The state-of-the-art facility, which represents the single largest investment made by Lidl in Ireland since 2000.

From January 2020, Lidl said customers will benefit from a price reduction on 500 products.

The new distribution centre’s increased capacity means it can store 49 million products through the streamlining of operations. Over 60% of these products will come from Lidl’s 225-strong network of Irish suppliers.

The distribution centre has the capacity to serve Lidl’s network of 90 stores in the Leinster area.

Speaking at the official opening, Mr Donohoe said the facility is a huge investment by the company in Ireland and a vote of confidence in the economy.

He explained: "It is also a welcome development for the people of Kildare, who will benefit from the creation of 100 new jobs, in addition to the 250 people that Lidl already employs in the region.

“In particular, we welcome the company’s decision to build a sustainable and future-proofed facility that does not generate landfill waste. It is proof that a business can be sustainable and tackle climate change while also generating revenue, driving efficiencies and creating jobs.

“Lidl’s footprint in Ireland is significant. It is a committed investor in this country’s shoppers, local communities, and the wider environment. My department is eager to see how this facility contributes to the local economy. I wish them every success in the years ahead.”

J.P. Scally, Managing Director of Lidl Ireland and Northern Ireland, said the distribution centre will be good news for its customers.

He added: "By increasing our storage capacity and streamlining our supply chains we will achieve even higher levels of efficiencies and in turn deliver considerable savings to shoppers across the country. That means lower prices on the same quality produce, and more money back in our customers’ pockets.

“It is important for us that we ensure our build is future-proofed and that we are expanding sustainably. By investing at the scale that we have, we’ve ensured that we have the ability to supply Ireland’s growing population efficiently and consistently, long into the future.”

A feat in construction

The construction of this landmark development in Newbridge which, at 58,000m2, is one of the largest single buildings in Ireland, was managed by Irish firm, John Paul Construction following a competitive tender.

The project saw up to 2,000 construction jobs created during the construction phase, followed by the creation of a further 100 new full-time roles on completion. These new full-time positions are in addition to the 250 permanent staff who will move over from Lidl’s existing distribution centre.

Lidl invested €1m in its football-pitch-sized rooftop solar panel array – the largest on any building in the Republic of Ireland.

The solar panels will reduce the centre’s carbon output by some 473 tonnes annually, which is the equivalent of taking 175 cars off the road every year. Over 25% of the new facility’s energy requirements will now be generated by solar power.

Other sustainability initiatives at the centre include: