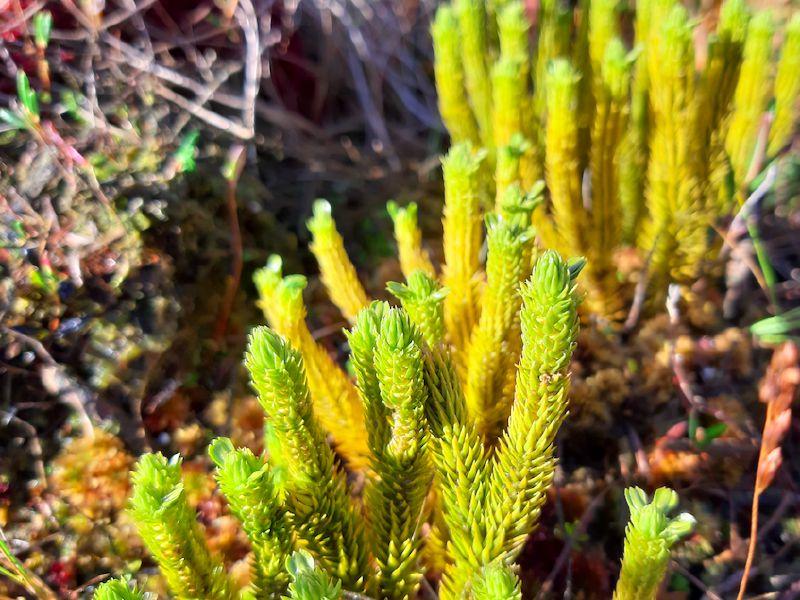 Last week I visited Girley Bog in Meath, one of the Irish Peatland Conservation

Council’s nature reserves (owned in partnership with a number of stakeholders that have formed Girley Bog Meitheal) and came across Huperzia selago, a type of fir clubmoss (aiteann muire as Gaeilge).

The importance of identifying this moss lies in the fact that it is an Annex V protected species under the EU Habitats Directive. The current population of this species in Ireland is considered stable; however, in the past burning, drainage, over grazing, agricultural improvement and habitat loss have all contributed to the decline in this species.

There are many different fir clubmoss species. This particular species prefers acidic, nutrient poor ground typical of peatlands, heathlands and, but rarely, sandy quarrys. Although the species name contains the term ‘moss’, this species is not actually a true moss due to presence of tracheids. These tracheids are long cells within the stem which support the plant in transporting water and minerals. It is an evergreen species that stands erect to a height of up to 12 centimetres. Its erect stems are covered along their length in narrow pointed leaves, which only have one vein. This is another distinguishing feature that separates this plant from others, as most other vascular plants will have more than one vein in their leaves.

Hyperzia selago does not produce a flower, but instead reproduces using spores. The spores can be observed before they are dispersed by the wind or with the help of animals sitting between on the leaves close to the stem. I am working on peatlands for almost 14 years and this was the first time I came across this particular species. Our environment and the variety of plants, animals and fungi that can be found local to us all is truly a lifelong learning experience. Girley Bog is surrounded by a 6km national loop walk so if you wanted to explore this nature reserve or simply to learn more about it visit www.ipcc.ie.