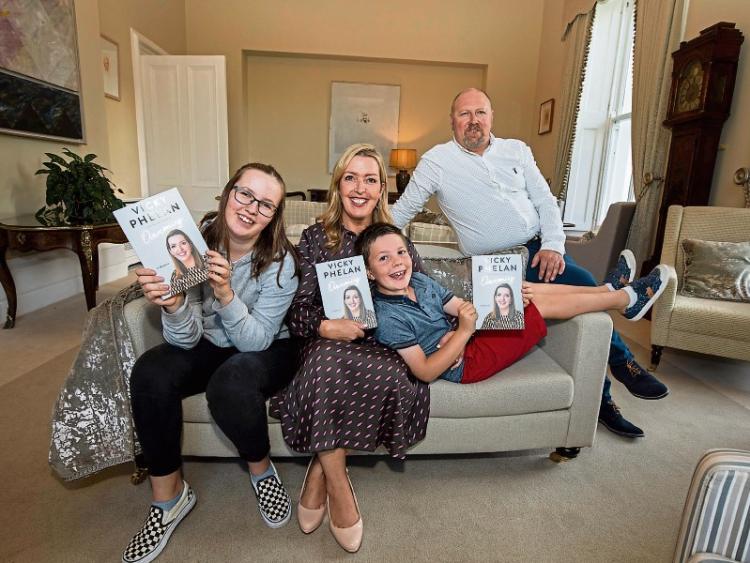 Vicky at the launch of her book in Plassey House with husband Jim, daughter Amelia and son Darragh PICTURE: Alan Place

THE effect that Vicky Phelan continues to have on women across Ireland was again evident in UL on Tuesday evening at the launch of the campaigner’s memoir.

Professor Sarah Moore Fitzgerald was on hand in Plassey House to formally launch the Annacotty woman’s memoirs and was inspired to speak for the first time to speak about her own battle with cervical cancer.

Titled Overcoming, the book charts mother-of-two Vicky’s life and its highs as well as its many struggles including an horrendous car crash in Australia, nearly losing her daughter, and, most famously, against cancer and the institutional failings that exposed her to the deadly disease.

Her exposure of the CervicalCheck programme’s shortcomings which saw her, and 220 other women, being incorrectly given the all-clear from cancer, is one of the defining scandals of our era - and her bravery in speaking out and agitating for change has had a stirring effect.

Speaking for the first time about her own battle with cancer – which thankfully for her is clear – Prof Moore Fitzgerald said: “I know what it’s like to receive this frightening and difficult diagnosis. I know that feeling, which is described so authentically in Vicky’s book, of my legs going from under me.

“I remember having to hold onto the table when I was told because I was afraid I would fall – as if the ground beneath me had stopped being so solid, as if nothing could be relied on any more.”

There was a huge turnout to the launch of the book – in shops now, published by Hachette Books Ireland – including Vicky’s friends and family, as well as Labour TD Alan Kelly and Fine Gael Senator Kieran O’Donnell, who both kept her case high on the political agenda. Despite only being on sale a few days, it’s already top of the Irish non-fiction book chart.

An emotional Vicky appeared with her ghost writer Naoimi Linehan at her side.

“This book would not be the same without you. I often wondered towards the end of you writing this that you would know it. She has a beautiful gift which she has shared with all of us. Honest to God, I couldn’t think of a better person to write the book.”

Prof Moore Fitzgerald acknowledged she was one of the lucky ones, able to fight her battle with cancer behind close doors.

“We all know that because of what happened in her case, Vicky Phelan sacrificed that kind of privacy and by doing so, she pointed to things that were very wrong. Very wrong indeed,” she told the audience.

One could hear a pin drop when she read an extract from Overcoming when Vicky decided against signing a non-disclosure agreement.

“They wouldn’t discuss any deal or settlement unless I signed to say I would not tell anyone anything about this. What about the other women or the families of those who may already have died? The lives that had already come to an end.

“If I signed, they would never know the truth. I maintained my position. The day felt long. It was like a game of poker – waiting to see who would fold first. Finally, the day came to a close. No offer was forthcoming and I steadfastly refused to sign”.

Prof Moore-Fitzgerald said: “It’s hard to get inside the minds of the people who proposed this in the mediation of Vicky’s case, but I can only imagine they were confident she would crumble. They might have calculated that this was a woman at her sickest and weakest and most depleted. they must have known she was under profound emotional, physical and financial strain. Which is why they imagined the sequence of events would go like this: She’ll sign the agreement, we’ll sign a cheque. Job done, game over. Clearly, they didn’t know who they were dealing with.”

Vicky Phelan will be in conversation with journalist Rachael English on Sunday, September 29, at the Castletroy Park Hotel.

Starting at 2.30pm, tickets priced €20 are available from Eason’s in O’Connell Street and include a copy of Overcoming.

Read also: Things what are on in Limerick