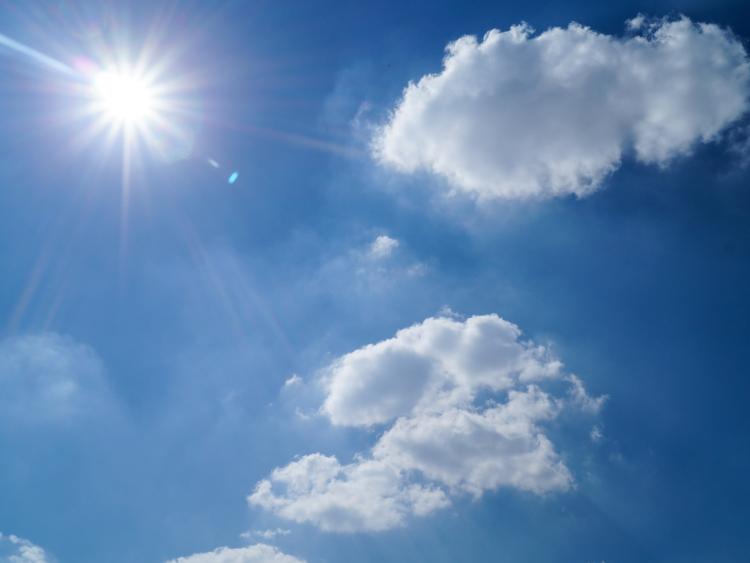 Weather forecast for Ireland for the coming days from Met Eireann

The weather forecast for Ireland for the rest of the week from Met Eireann is for a lot of dry weather for the majority of the week with temperatures set to reach in excess of 20 degrees at times.

The weather forecast for Ireland for Wednesday from Met Eireann is for a bright and breezy day with sunshine and just a few passing showers. Highest temperatures of 15 to 18 degrees in fresh westerly breezes. It will start out dry on Wednesday night but rain will move into the west and north later in the night, turning heavy in places. Minimum temperatures 10 to 13 degrees in moderate, locally fresh southerly breezes.

The weather forecast for Ireland for Thursday from Met Eireann is for outbreaks of rain across the country for a time but it will feel very mild and humid. However, the rain will ease during the afternoon and clear away to the east allowing drier, brighter and fresher weather to move in. Highest temperatures ranging 16 to 21 degrees, warmest in the southeast of the country. Winds will be fresh southerly at first, veering west to northwest later. Dry on Thursday night with clear spells. Lowest temperatures of 5 to 8 degrees.

Here is our 7 day Atlantic Chart which shows the precipitation and pressure forecast in 6 hour intervalshttps://t.co/F4a83snZCo

A nationwide forecast and outlook covering the next week can be found here. https://t.co/dMOSFKb2P0 pic.twitter.com/ScufBzayDY

The weather forecast for Ireland for Friday from Met Eireann is for it to be mainly dry apart from the odd patch of rain in the northwest. A mix of cloud and sunshine. Top temperatures 15 to 18 degrees in moderate southwest breezes. Dry and mostly clear overnight. Lows of 5 to 8 degrees.

The weather forecast for Ireland for Saturday from Met Eireann is for it to be dry across the bulk of the country but the risk of a few showers in the northwest. The best of the sunshine in the south and east. Highest temperatures 17 to 20 degrees in moderate southwest winds. A few showers in the north overnight but mainly dry elsewhere. Minimum temperatures 12 to 15 degrees.

According to Met Eireann, a few showers are possible in the west and north on Sunday but it should be dry elsewhere with some sunshine. Highest temperatures of 17 to 21 degrees.