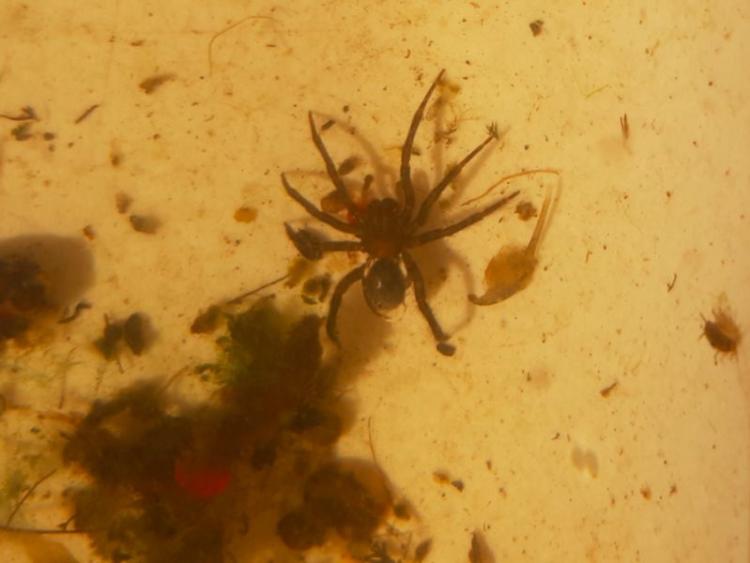 I believe it is fair to say we are all familiar with spiders. An invertebrate (an animal without a backbone), they have a distinct head, thorax and abdomen, and, of course, eight legs.

Spiders can be found all around our communities, both outside in our gardens and parks but also indoors in our kitchens and sitting rooms.

There is one lesser-known spider that can be found in our communities. This spider we are not as familiar with as it spends all of its time submerged beneath the water’s surface — the diving bell spider (damhán alla clog tumadóireachta as Gaeilge).

You may be familiar with one of Ireland’s largest spiders, the raft spider, which spends its time half way between land and water, skimming the surface of the water and then waiting to catch prey.

Although the raft spider is known to duck beneath the water if it feels threatened, the diving bell spider that is the only one of its kind in Ireland that actually spends all its time underwater.

To breathe, this spider must come to the surface and trap atmospheric oxygen in tiny hairs on its abdomen, which to us, when underwater, looks like a silvery bubble. During this time on the surface of the water, the spider will appear brown in colour.

The diving bell spider gets its name as, when underwater, it creates a bell-shaped, often described as an umbrella-shaped, air bubble between the stems of plants found growing in the water.

In this bell of oxygen, the spider will sleep, feed and reproduce, only needing to leave this air bubble to hunt and return to the water’s surface once a day to replenish its oxygen supply. The diving bell spider is small at 8-15mm, with males larger than females.

It is a predator beneath the surface, feeding on other freshwater invertebrates — and be warned: although not toxic the bite of the diving bell spider is said to be sore.