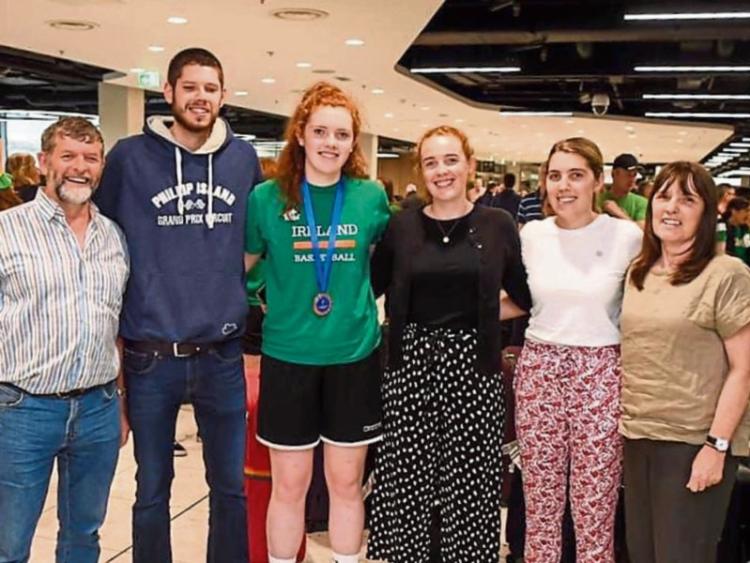 Ninety-two-year-old Charlotte Worrell was glued to the screen from her home near Monasterevin as her granddaughter, Claire Melia, lined out to captain Ireland in Kosovo.

“My nanny, she is 92 and she was watching all the games on the laptop on the website. After every game, she’d ring me to talk about how it went,” said Claire.

Her number one fan was thrilled when the talented Portlaoise Panthers player was presented with a bronze FIBA U20 Women’s European Championships Division B medal.

The college student was also named as one of the five best players of the tournament. 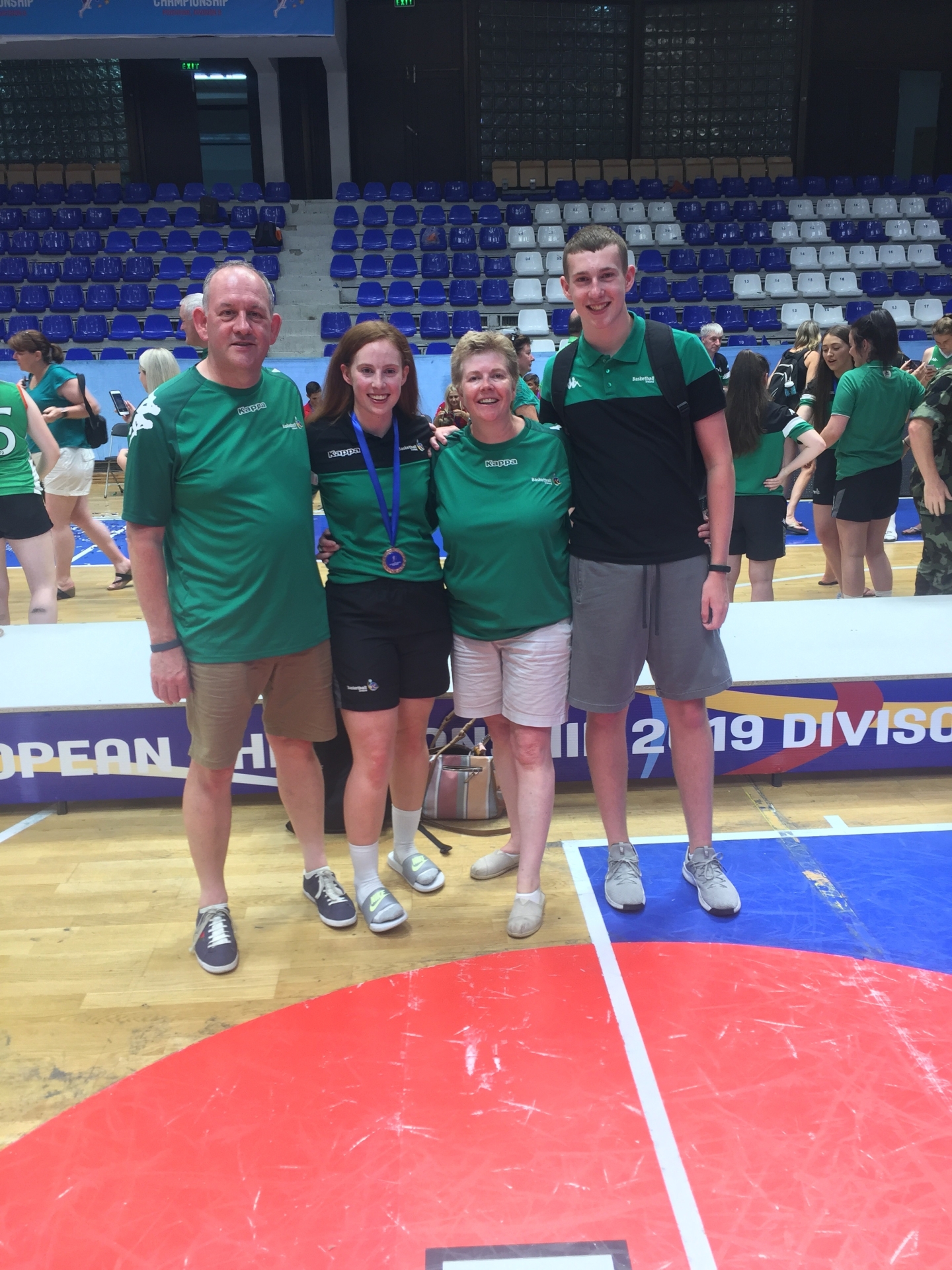 Joe, Sorcha, Sharon and Cian Tierney pictured after the medal presentations in Kosovo

Claire, who was headhunted to attend St Joseph’s University in Philadelphia, spoke to the Leinster Leader last week prior to her departure for the US on Sunday.

On their Facebook page, Portlaoise Panthers wrote: “We are all going to miss her so much on-court and off-court but we are so happy and proud for her too. We look forward to following your progress in the USA Claire — the very best of luck from all Portlaoise Panthers and thank you for everything.”

Claire was offered a scholarship by the university back in 2017 and was supposed to go Stateside in 2018; however, fate intervened.

“It fell through because I injured my ACL (Anterior Cruciate Ligament) and I couldn’t go. My sister Sharon had it (ACL repair) done twice so she gave me advice on how to deal with it. The recovery was more of mental challenge than a physical challenge,” she said.

Claire explained how there very nearly wasn’t going to be an Irish team in the U20 Championship.

Nine of the women had been on the U18 Irish team which had made history two years ago by winning a European silver medal, which saw Ireland promoted to Division A basketball.

Claire’s parent’s Ger and Shirley, and her sisters Sharon and Sinead, traveled out to Kosovo for the tournament.

The team put in some huge performances and made it to the semi-final of the tournament, but were defeated by Bulgaria by 58 -68.

They then won the play off against Great Britain by 60-57 on August 11 to not only claim the bronze, but to also earn promotion to Division A basketball for Ireland at this age group for 2020.

Captain fantastic Claire led by example, finishing out the game with yet another double double of 20 points and 10 rebounds, along with seven assists.

Such is Claire’s professionalism, determination and thirst for success that she was disappointed with the bronze because she felt the team had the potential to win the tournament.

However, she acknowledges that having two European medals in your back pocket is no small feat.

She will be continuing her studies in Early Childhood Education in the US as part of the scholarship. Spurred on by the response the former Ardscoil Rath Iomgháin student has received since returning home from the tournament, she is hoping to make the Irish senior women’s team next year.

“It’s been brilliant. I went into Mooney’s in Monasterevin recently and everyone was coming up congratulating me, they were people that didn’t know a lot about basketball but they were delighted for me. I felt like a superstar,” she said.

Sorcha, who also was on the U18 silver winning Irish team two years ago, played for the senior women’s team last year and hopes to be selected again.

The Courtyard Liffey Celtics player was encouraged to try different sports by her parents Joe and Sharon when she was growing up.

Once she took to the court, there was little doubt basketball would be her favourite. Studying Maths, Computers and Business at Trinity College, Dublin, the former Colaiste Chiaráin student also coaches the U/11s at the Leixlip club and was looking forward to get back to seeing her team this week.

Sorcha is encouraged by the strides made in basketball in Ireland in recent years and believes successes at European level are good for increasing the profile of the game.

“It’s a really really good sport. It’s great for girls. You can play it indoors, it’s not weather dependent,” she said.

She believes that the fact that the bulk of the U20s had previously played together at international level was important.

The team also had two other Kildare connections with Erin Bracken from Liffey Celtics as Assistant Coach and Alanna Savage from Confey as video annalist.

With Claire and Sorcha as key figures in one of Ireland’s most successful basketball teams ever, there is no doubt their skills will continue to be in demand at national level. 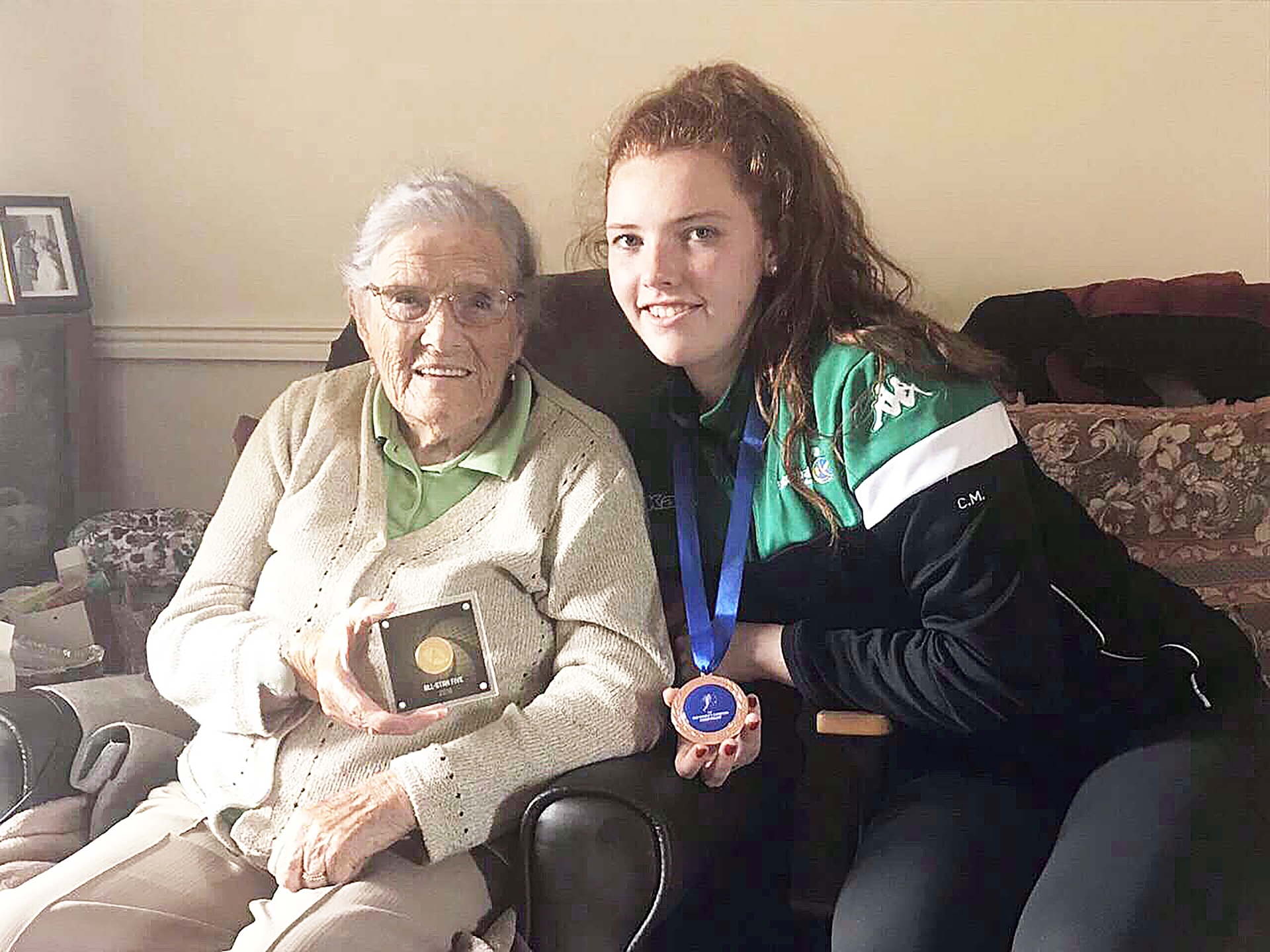 Claire and her nanny Charlotte