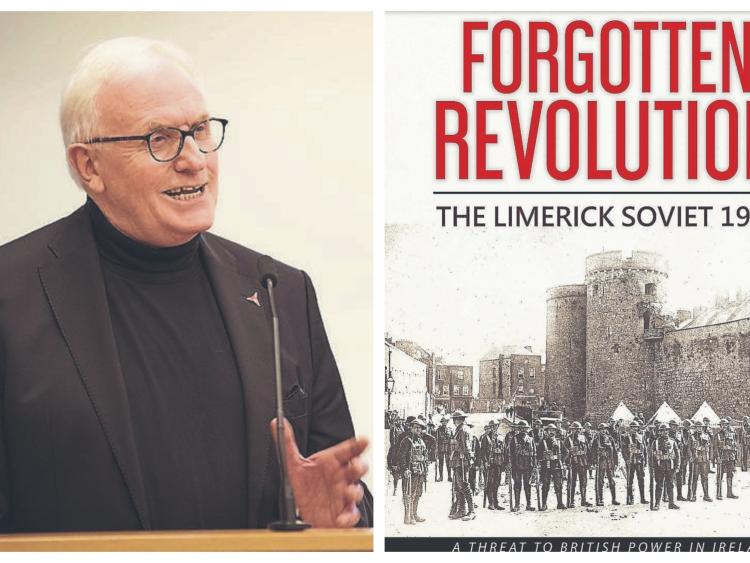 Liam Cahill to give talk on book

Former RTÉ journalist and Intel communications man turned historian, Liam Cahill, who has published a new book telling the forgotten story of the deep involvement of workers and their trade unions in the struggle for Irish Independence in the years 1916 – 21, will speak at Kilcullen Heritage Centre next October.

The talk, which is part of the Decade of Centenaries series of events, called Strikes and Soviets, will be based on his book,  titled Forgotten Revolution [The Centenary Edition] The Limerick Soviet 1919.

The book takes as its starting point as the Limerick General Strike, or Limerick Soviet, of April 1919, when 14,000 workers protested against the imposition of military law on the city.

A key question for the author, who was a public face of Intel Ireland in Kildare between 1995 and 2001, is why his grandparents and his generation were much more radical than his own generation.

He published the Limerick soviet story in 1990 but that story has been revisited and, following new research there is a quarter more new material.

“The job proved to be much bigger than I thought,” said Liam.

His study of dozens of new files has reshaped the story completely, a process which, he told us, was aided by his attending a writing course at Maynooth University in 2016.

The book (priced at €15) is available online in paperback and e-format from Amazon and also by contacting the author directly liamcahill@indigo.ie

In Limerick in 1919, the British government imposed severe regulations following the shooting dead of a policeman and an IRA prisoner during a rescue attempt at a local hospital. Workers were required to get a military pass and go through checkpoints four times a day. Limerick United Trades and Labour Council rejected the restrictions and, instead, took over the running of the entire city for a fortnight, including printing their own currency and newspaper.

Liam, who has presented a copy of his book to President Higgins at Áras an Uachtaráin, said the story goes beyond the story of the Limerick Soviet and contains intriguing new information from the Military Archives in Dublin, that shows events and developments in the vital year of 1919 in a new light.

“The British authorities saw workers and their rapidly growing trade unions as posing as big a threat to their power as the Irish Volunteers or Sinn Féin," he outlined.

The book and his talk will explore the role of labour movement and trade unions in the history of the time.

Liam said "it is imperative that historians and researchers actively redress the neglect of Labour’s role and recognition of its role in our history".