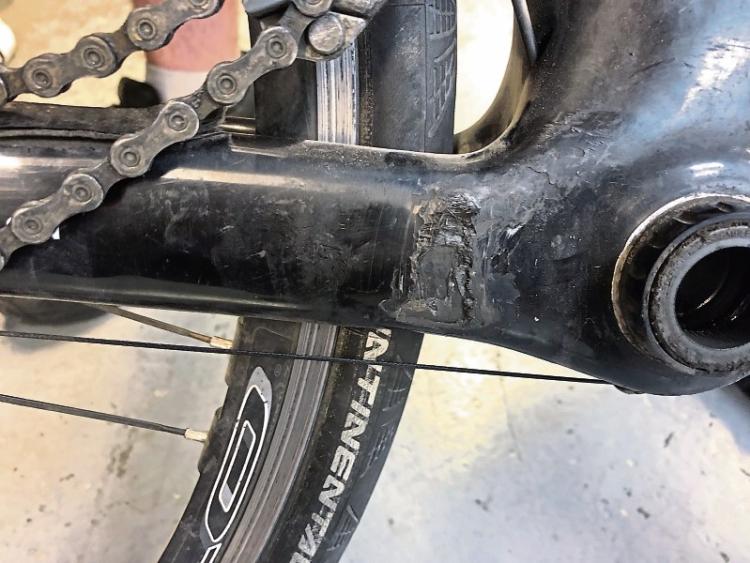 The damage done to my chainstay

According to Strava, which is, I suppose, reasonably trustworthy, I have done, at the time of writing, 23,631km on my Cervelo S2.

As regular readers of this column will know, I have a love of backroads. And alas, backroads tend not to be terribly well paved, so you can assume that a good percentage or those 23,631km were on bumpy roads, all the while carrying my ample frame.

If it were a person it would deserve a medal, let’s face it.

To give some context, the Cervélo S2, or at least the version I have, was the first successful and mass-produced carbon fibre aero bike on the market.

It was an advancement on their S1 which was an aluminium aero bike. I don’t know that Cervélo invented the notion of making a bicycle aerodynamic, but they pioneered bringing it to the world in a way that the ordinary folk could use one.

Every brand worth its salt these days has an aero bike in its armoury, and even bikes that aren’t aero are never designed in such a way that would be bad aerodynamically — at the high end, that is.

The S3, that is to say, the one that came directly after the S2 that I have, was considered to be an amazing bike by the pro riders, and many breakaways and races were won on it — to such a degree that when the first S5 came out, riders bought it in huge numbers even though it subsequently proved to be problematic at doing anything that didn’t involve going in a straight line.

And it is that failing which has defined much of Cervélo’s work since then.

The two editions of the S5 since then have had greater focus on ride quality than before, and borrowing and integrating some of the great rideability that their amazing R-series bikes have always had.

But back to my humble, mould-breaking, S2. It is really fast and stiff and performed well enough in bends, although having ridden newer bikes like the Giant TCR, an R3 and an Orbea Orca, I can confirm that it’s showing its age.

It was also, strangely enough far better over bumps in the road than my previous carbon fibre bike, a Lappierre s-lite, even though the design of the Lappierre was considerably younger by about five years.

The only major failing the Cervélo had, alas, was that when the chain dropped off the big chainring it tends to get caught in behind the chain rings and takes lumps out of the drive side chain stay. Initially it was just painwork, and I wasn’t bothered too much by paintwork that nobody can see.

But in recent times it has started to take far more than paint out.

The lads in Bikeology took a look at it, took off the chainrings and cranks to have a better look, and finally came to the conclusion that the cumulative effect of dozens of dropped chains had done serious damage.

They had taken enough flecks of carbon out of what is a very vital piece of tubing that it could now be dangerous to ride, especially on the not so beautiful roads that I ride on, and with possibly terrible consequences.

I was referred to Keith in CarbonTec in Palmerstown on the promise that he is the best in the business at repairing carbon bikes, and in particular, restoring the paint in such a way that you’d never know anything had been done.

I’m less concerned about a paint job in a section of the bike that nobody can see, than I am about both the safety elements of riding it and the general longevity of my bike.

At the time of writing I’ve sent him pictures and am due to drop it into him this evening.

He says it’s not the first time he’s heard of it happening and he says he’ll do his best for me. Judging by pictures on his Facebook page and the comments of others who have seen his work, I’m confident I’m in good hands.

Over the phone he recommended that I buy a chain catcher which, in the circumstances, isn’t a bad idea!

I’ll let you know how it all goes.

In other news my training continues apace for CP2CP, the 300km one-day jaunt to Cork.

I’m very happy with it, and with my general progression.

The heartrate is staying lower at higher speeds and the body is more comfortable with additional work.

We’ve also been given a brief outline of the route. We’ll start in Croke park and head south towards Blessinigton (via Tallaght) and on out to Baltinglass.

From there we’ll head for Carlow, Thomastown (Co. Kilkenny), Waterford, Dungarvan, Youghal and finally into Cork City where we’ll finish at Kennedy Quay in the city. There will be grubbage at many of those stops.

I’m actually starting to look forward it at this stage.