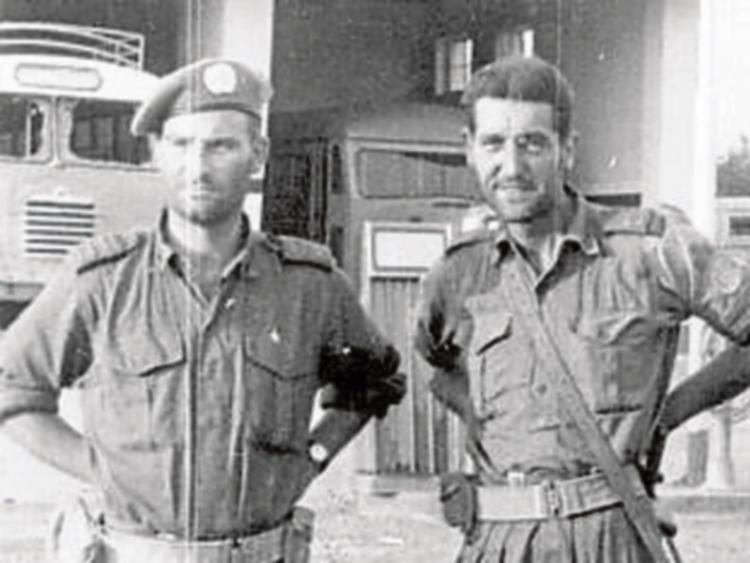 Kildare County Council is to ask the Taoiseach and Minister for Defence to grant “long overdue” medals for gallantry for the Irish soldiers of A Company, 35th infantry battalion, which served the United Nations (UN) in Jadotville in 1961.

Cllr Michael Coleman (Fianna Fáil), a former member of the Defence Forces, proposed the motion at the monthly meeting of Kildare County Council in Naas on Monday, July 29, for what he called a heroic Irish role in the war.

The Siege of Jadotville occurred during the Congo crisis in September 1961, when lightly-armed Irish soldiers resisted an onslaught for six days while they awaited rescue. They were eventually forced to surrender and held as prisoners of war for a month.

He said the medals were promised by former Taoiseach, Enda Kenny, in his final days in office, but the soldiers still had no medal.

The Leader asked the Department of Defence about the issue following the discussion at Kildare County Council.

It replied as follows: “On 13th June 2017, the Government decided to award a medal known as An Bonn Jadotville or The Jadotville Medal to each member of A Company, 35th Infantry Battalion and to the family representatives of deceased members to give full and due recognition in honour of their courageous actions at the Siege of Jadotville.

“The Minister with Responsibility for Defence, Paul Kehoe TD was delighted to present these Jadotville Medals at a ceremony that took place on December 2, 2017, in Custume Barracks, Athlone. Custume Barracks was the location for this event as it is considered the spiritual home of A Company and it is from here that A Company assembled in advance of their fateful deployment to the Congo,” it concluded.

Cllr Coleman responded to its statment afterwards. He said: “In December 2017 a general Jadotville Medal (linked to the 2016 Unit Citation) was presented to every Jadotville veteran or their next of kin in recognition of the fact that they participated in the defence of Jadotville. This general Jadotville Medal, while very welcome, should NOT be confused with the Military Medals for Gallantry (MMGs) and Distinguished Service Medals (DSMs) as mentioned for the 33 men who performed exceptional acts of bravery and who were consequently recommended for exceptional awards.”

At the Kildare County Council meeting, Cllr Coleman said: “It is important we recognise these heroes and Commandant Pat Quinlan as a superhero for leading his men from death.”

Cllr Seamie Moore said another man who took part in Jadotville battle was Lieutenant Joe Leech, who was recorded as being born in Dublin, but lived in Naas.

Lieutenant Leech died in 2005 and his son, John, a former navy Defence Forces member, said his father joined the army in 1951. “He was involved in the No 1 platoon, which was in the vanguard, in the worst part of the battle.”

Mr Leech, now working with the Water Safety Association of Ireland, said his father’s father was a garda in Naas, and the family lived at the Old Jail, now St Martin’s Row.

John Leech said his father did not talk to him about Jadotville until he (John) was in his 30s and had been in the navy for over a decade.

But, he said, his father, featured in an award winning RTÉ documentary about the siege in 2004. The saga has also been made into a film, 2016’s The Siege of Jadotville, which starred Jamie Dornan, adapted from Declan Power’s book The Siege at Jadotville: The Irish Army's Forgotten Battle.

Mr Leech said the episode was embarrassing to then Minister, Conor Cruise O’Brien, as the Irish army had been advised not to go to the Jadotville battle location.

He said there may be a problem with records for the purpose of granting the medals proposed by Cllr Coleman.

Cllr Coleman told the council the soldiers were serving in the Congo from June to December 1961 as part of the United Nations peacekeeping operation in the province of Katanga which had broken away from the rest of the Congo and had declared itself independent — hence the reason for the UN presence.

It emerged that on September 13,  1961, the Irish A company, under the command of Commandant Pat Quinlan, was attacked in retaliation for the UN action in Elizabethville and a five day battle commenced.

Around 3,500 soldiers, including well-trained military people, went into action against the 155 Irish troops.

Cllr Coleman said the average age of the Irish troops was 18.5 years at the time.

Two  were aged 15 years old and around twelve of them were 16 years old. At the end of the battle, the Irish Company had sustained five wounded while the enemy had 300 dead and 750 wounded.

The ” Company ran out of food, water and ammunition and ended up as prisoners of war for six weeks until there was an exchange of prisoners in October 1961.

Cllr Coleman said they were immediately back in action again in Elizabethville until their tour of duty ended in December 1961, when they returned to Ireland.

During the fighting in December three men from A Company won medals for bravery in action.

Cllr Coleman said the Jadotville action is recognised worldwide and one of the best perimeter defensive battles in history. It has been likened to the Battle of the Alamo and Rorkes Drift (Zulu wars) with one major difference — no one died on the Irish side.

The Jadotville action is the single biggest military engagement the Irish Army has been involved in alone against a foreign enemy since the formation of the State.

Cllr Coleman also said the battle tactics by Commandant Quinlan has been taught to other armies as an example of good military practice.

But, he said, efforts to get medals for the men have been ignored so far.

There are 40 Irish survivors of the episode still living.

Cllr Coleman said five veterans took their own lives due to Post Traumatic Stress (PTS) and many others lived difficult lives due to their experience in Jadotville.

While a Unit Citation was awarded to A Company in September 2016, the medals that Commandant Pat Quinlan recommended for 33 of his men for bravery in action have yet to be awarded, said Cllr Coleman.

“On his last day in office as Taoiseach, Enda Kenny stated that medals will be awarded for Jadotville — and he was referring to the 33 medals as mentioned above.  These medals have not yet been awarded.”

Cllr Peggy O’Dwyer said that as the wife of someone who served in the Defence Forces she is disappointed the medals had not been given to the men.

Cllr Coleman said: “I knew a lot of men who fought in that battle. They never spoke about it.”

Cllr Moore said that some military people saw the Irish action as a surrender but the men went on to fight other battles.

There are a number of books written about the episode. They include the 2006 book, Battle of Jadotville, by Michael Whelan, and the aforementioned Siege at Jadotville, by Declan Power, which has come out in two editions.

Another is Heroes of Jadotville, by Rose Doyle, a relation of Commandant Pat Quinlan.

Another book about Jadotville is No White Feather by Sean Foley.