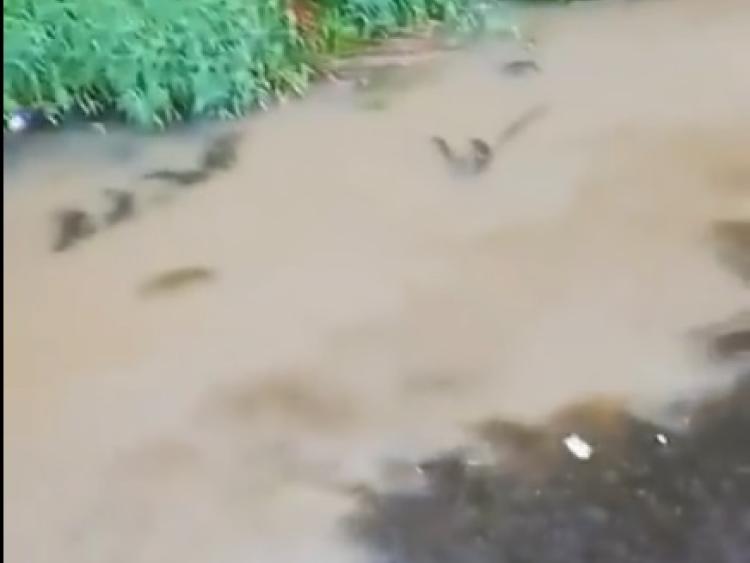 A still from a video of the sewage spill

Irish Water has said that the sewage spill into the Barrow last weekend may have been due to a temporary blockage that caused an overflow during heavy rainfall.

Local Monasterevin man, Stephen Mulligan spotted a leak at approximately 7.30 last Sunday evening from the bridge on the R445, and he posted the video on his Twitter account.

In a statement Irish Water said that it and Kildare County Council had carried out an investigation into the overflow.

They noted that there is no overflow at present.

“However, there may have been a temporary blockage that caused an overflow at the weekend during heavy rainfall.

“Irish Water will carry out cleaning of this network to remove any debris from the system that may cause blockages which can lead to overflows,” the statement continued.

“Irish Water would like to reassure people that there should be no lasting effects on the river and that there was no residual evidence of an overflow at this location today.”

I need this to be seen.. sewrage being pumped out into the Barrow at Monasterevin August 4th 2019 @ 7:28PM. @IrishWater claimed it was a blockage 2 months ago and had it cleared apparently . Yous are doing a wonderful job. I'm disgusted. @EPAIreland @InlandFisherIE @KildareCoCo pic.twitter.com/M3VxokLs1y