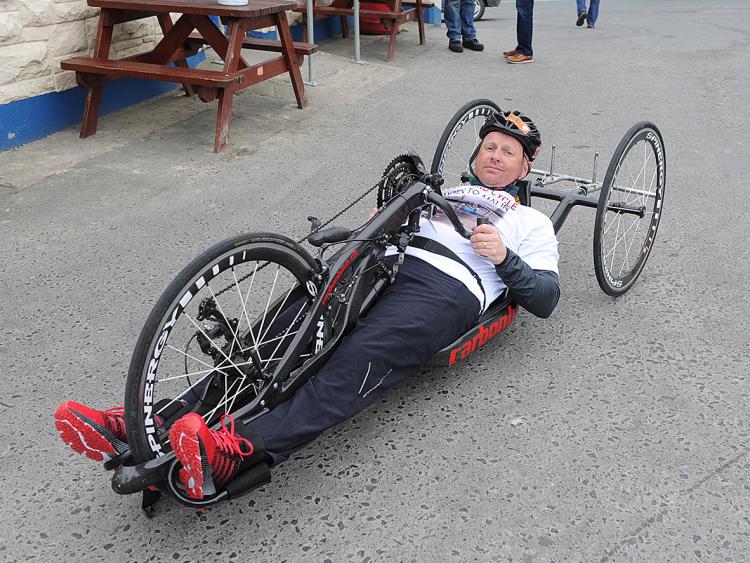 Mark Nugent gets ready for his Mizen to Malin challenge

Maynooth man Mark Nugent is midway through a marathon cycling challenge to get from Mizen to Malin in six days.

What makes this particular cycling challenge unusual is that Mr Nugent, suffered a spinal injury in April 2016 and will  be propelled solely by his arms on his hand bike.

He started on Sunday morning at Mizen Head in Cork and, averaging 100kms a day is and currently enjoying his rest day in Glasson, near Athlone today, Wednesday.

Tomorrow (Thursday) he will head to Enniskillen, to Muff on Friday and then Malin Head on Saturday evening.

He is joined by a number of other cyclists, including Mary Fitzgerald who has survived breast cancer and together they are working to raise funds for the two charities Spinal Injuries Ireland and Breast Cancer Ireland.

Read also: The big interview with Mark Nugent: 'Everybody needs a new challenge at 40'

Hard and all as the challenge is for Mr Nugent,  Ms Fitzgerald has never done any kind of cycling before, but is thoroughly enjoying the adventure.

He is an experienced cyclist and runner, completing four marathons, the Galway Cycle, the Race Around Ireland and taking part in numerous charity events.

His life-changing injury didn’t dampen his determination however, and he remembers with a smile a conversation he had with his doctor before his operation, saying: “The doctor asked me what my goal was, and I told him it was to do my fifth marathon in a wheelchair. He laughed and said most people usually say I just want to get out of here and have some independence.”

Mark achieved this when he completed the Kilkenny marathon last year, it was after this that he says the idea for his current challenge came to him.

“I told my wife Jacqueline I’d like to enter the lottery for the Berlin Marathon in 2019, so we entered that, and it was on my honeymoon that I decided I needed something to do in the meantime, and doing Mizen to Malin had always been on my bucket list,” explained Mark.

After deciding on the two charities he would raise money for he began an intense training schedule beginning in January; starting off doing half an hour a day on a turbo trainer and building from there.

It’s hard to prove, but as far as Mark and his team are aware, this is the first time ever that a hand cyclist will complete the Mizen to Malin trip.