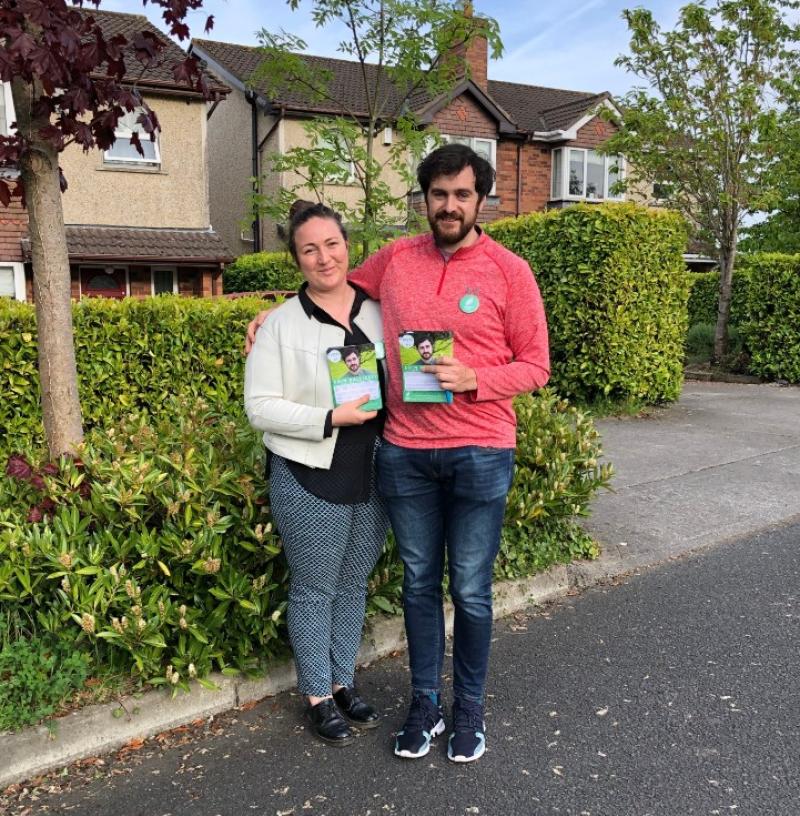 There is absolutely no way of knowing whether the Green Party’s Eoin Hallissey will get elected but there is undeniably something in the air that suggests a meeting of minds at the intersection between the aspirations of the eco warrior and the frustrations of the more mainstream voter.

It comes down to the simple act of getting around the large village you live in.

Eoin and his partner Ashleigh Connors were canvassing in the Meadow Court estate in Clane, which is, significantly, on the Ballinagappa road, a full 700 metres to the village’s main thoroughfare.

If you’re in a car, going to work or bringing your kids to school, such is the volume of traffic that the 700 metres might as well be 7kms.

And that’s where the couple are finding a welcome on the doorsteps.

“Is there anything you’d like to discuss about the election,” he asks the voters.

“It’s actually my number one priorty,” the candidate replied. It’s not a handy line he made up for the potential voter, it’s at the top of his list on his flier (made from recycled paper naturally).

At every door that he visited it was the big issue. For some it was transport around the village for themselves or their children, for others it was about getting to work in Dublin.

Eoin tells them that he wants to reduce the reliance on cars and improve public transport and cycling lanes.

He says he wants to create good cycling infrastructure around the village, but also notes that there is a good train service only five kilometres away and yet the public bus that carries people from Sallins won’t stop in Clane.

“It’s better than what was there, which was nothing, but it’s still not good enough,” he says.

He’s proposing a better bus service and proper cycling facilities to and from Sallins, because, as he told one householder, 5kms is only 25 minutes on the bike at most.

“People think that cycling lanes are something you have in Dublin or Amsterdam, but then 30kms outside Amsterdam in a town this size they will also have cycling lanes, and you can bring your bike straight to the train station, put it on the train, and get into the city on the train.”

One household they knocked on was a French/English couple, who were very strong environmentalists.

The lady wants to see better recycling bins in the village centre, and suggests that, as she experienced growing up in England, children should be given lessons in cycling on the road and have to pass a test in order to prove competency. It would filter cycling into the public consciousness and normalise commuting by cycling, and, as Eoin points out, improve driver behaviour.

Eoin admits it’s a new idea to him, but he’ll certainly look into it more.

One householder wanted to set up a community farm in the local area, similar to the one in Rathcoffey which has turned out to be very successful.

The small sample experienced over the course of an hour in Clane suggests that the public is informed and engaged on green issues, having a much better sense of how they intersect with their own lives, probably brought into sharp relief by the horrendous traffic in the village.

There was also a strong sense that authorities telling people to recycle is not going to cut it in terms of solving the environmental crisis, and voters are looking to politics to play its part, finally.