One Voice Choir going strong a decade in 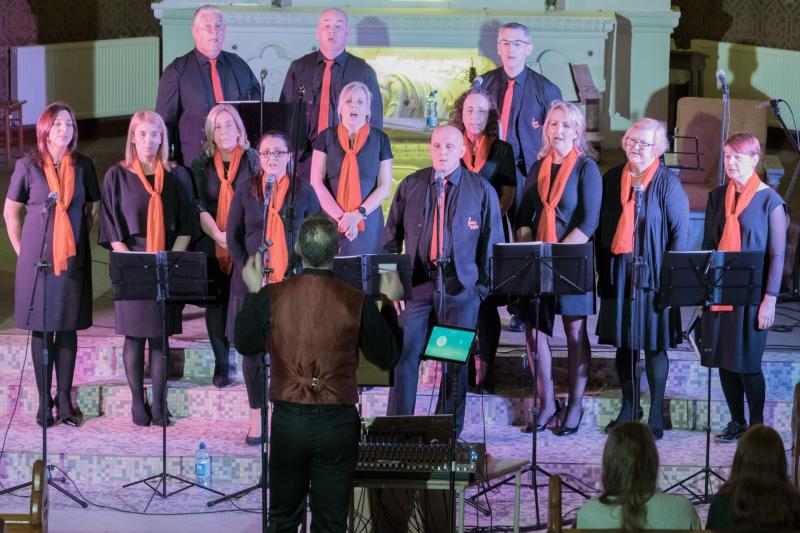 The choir at a recent concert in Allen Church

A choir in Allenwood that started 10 years ago with just a couple of singers has now grown to a point where it has 14 members and is set to host a concert to celebrate its first decade.

And perhaps more than that, it has become a very sociable group of friends.

One Voice Choir started when Aidan Donoghue, who had been singing in the main Sunday Mass choir in Allenwood decided he wanted to try to get a Saturday choir off the ground, to go with the Mass that evening.

“I was learning how to play the guitar. I was self-taught, just to play an oul few tunes. I was was in the other choir at the time and had a great interest in all types of music, including folk and Irish music.

“And I had this idea. Wouldn’t it be lovely — because I’m involved in musicals and was always singing — and sure why don’t I put the two of them together?”

He admits that although he liked the music of Sunday morning Mass, it wasn’t really his style.

“I was into the more folk stuff.”

A few months in, he contacted another Allenwood local, Pat Dunne, who he knew for years following their involvement together in Scór na nÓg. Pat and his wife Carmel had a background in traditional sessions and generally the Irish scene.

“We were never in a choir before,” Pat says, and admits it was daunting at first, not knowing what the reaction might be.

Carmel is originally from Aughrim in Co Wicklow, and both she and her sister moved to the the Allenwood area having married local men. They had sang in a folk group in Wicklow and so were a natural fit for the One Voice Choir.

From those modest beginnings, the group has grown over the years.

“Sometimes we would get one or two per year, and sometimes it would jump by more at a time,” says Aidan.

“There are now 14 in the group, from Allenwood and further afield.  The style of music was very different than what we had done before.

“I had a very American Christian music influence when I started on the guitar, which was a change from the regular Sunday Mass music.

“We also started to use backing tracks,” he added. “I can’t read music,” he admits. “Everything is by ear. We’re very organic that way.”

“I am the choir director, not musical director,” he clarifies. “I don’t need to be able to read music. What we lack in skills, we have an abundance of energy.”

Aidan and Pat say they’ve noticed that in the last year or two the congregation in Allenwood at Saturday night Mass has gotten bigger because they’re coming to hear the choir.

The choir perform every single Saturday, with the exception of a few weeks in the summer.

It can be hard to get all of the group, all 14 together, but they will always have at least six or seven or eight.

In 2015, the group’s ambitions moved beyond Saturday night Mass, when they hosted a full Christmas concert in the church and invited all the schoolkids.

It was considerable prod with a fully built stage.

“We don’t do one every year,” says Aidan.

“I put together a concert to celebrate 1916, got a little bit of grant money to pay for proper sound.

“Whatever we got went to St Vincent de Paul - everytime, we give €1,000 minimum, although it has been more.”

In the last two years they’ve had carol singing in the Whitewater shopping centre and in the Tesco in Monread.

“It’s the makeup of what I call the vibe of the group — we’re an out and out church choir, but if we went out on a social evening it would be Irish music all  night long. That’s the kind of people we are. If you’re with us, everyone gets to sing a song,” says Aidan.