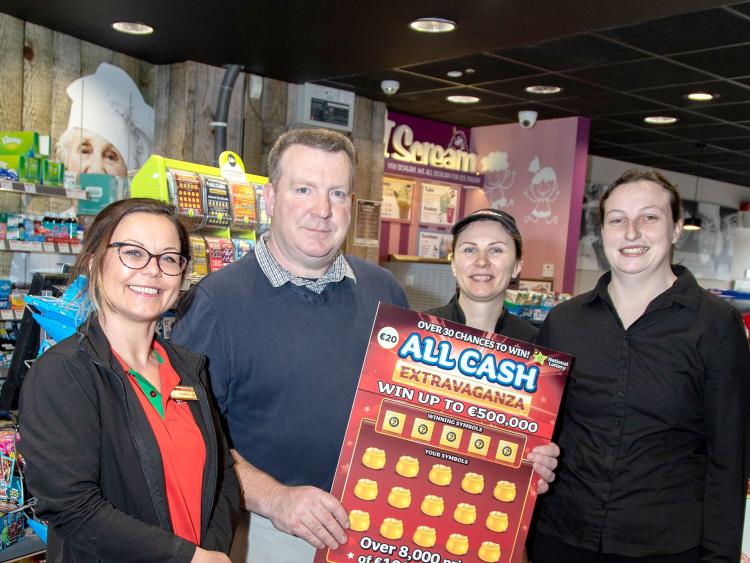 A lucky Kildare man kept a life-changing €500,000 National Lottery Scratch Card win so close to his chest he didn’t even tell his wife!

But the delighted winner – who landed the top prize on the All Cash Extravaganza Scratch Card at the weekend –  said the first thing he was going to do after leaving the Winner’s Room in Lotto HQ was go home and break the great news to his better half.

The winner, who bought the winning Scratch Card at Spar in Prosperous said he couldn't believe his luck when he scratched his way to a cool half a million euros. He was one of two big Scratch Card winners to collect prizes in the National Lottery office earlier today.

Holding the cheque for €500,000 he said “I bought the scratch card over the weekend and thought there had to be a mistake.

"I couldn’t have been lucky enough to win a half million euros. I decided not to tell a soul until I came into the Lottery offices, just in case there was a mistake! I now have the cheque and a bottle of bubbly, so I’m going to go home and gently break the news to my wife. I don’t think she’s going to believe me.”

Read also: Kildare based students raise €50,000 and counting for charity by cycling to Galway

He added: “It’s still a little early to say what I will to do with the money. I’m going to enjoy the next few days telling my family and closest friends – I just hope they believe me! I know when myself and my wife sit down to make plans we’ll have a shopping list as long as our arms! We will look at different options including paying off the mortgage, doing house renovations and maybe treating ourselves to a new car. We’re a sensible family so I can promise that we won’t lose the run of ourselves.”