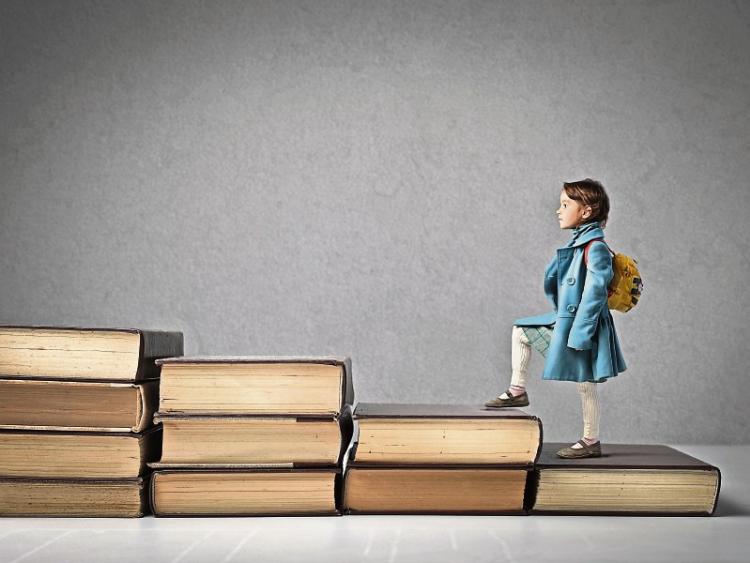 Having a child born in December is a tricky one for a mammy these days. I didn’t realise it at the time, but I certainly do now. This week I’m talking about the best age to send a child to school — namely Sarah.

Every single teacher I talk to tells me to wait to send her to school until she’s five.

It’s what I did with Aidan but then again that was an easy decision to make because he was born at the end of April.

So Sarah turned four in December, and by the time June comes she will have completed a year and half in preschool; one playschool and one Montessori.

She’s as bright as a button and I’m not just being a biased mammy when I say that.

Her little school (there are only eight children in the class) is fantastic, and the work they do mirrors frequently what Aidan is learning in Junior Infants.

Even when Aidan is doing his homework after school, she sits up besides him, and some evenings she’s nearly telling him how to do it!

She knows all her letters, thanks to her Montessori teacher, and her phonics work. She can spell her name.

She can colour between the lines, and thanks to some time spent in a Naoinra she has more than the cúpla focal.

She’s really social and anything but shy. She makes friends easily.

She can hold a pencil correctly and she’s asking to go to “big school” with her brother. Indeed, she has been offered a place for this coming September and I’ve accepted it but there is still a nagging doubt in the back of my mind.

I really don’t have any worries about her academically. I think she’ll be fine in that regard. In fact, I think she might just excel in that department.

I also think she’ll conform well. For the most part she’s very good at obeying orders and doing what she is told. She will have no problem sitting still in class. She’ll have no problems listening to her teacher, but I’m not saying I don’t have any worries about her at all. I actually do.

Sarah is an emotional little girl. She wears her heart on her sleeve. She can go from being delightfully happy to totally and utterly distraught in the blink of an eye.

She can, and often does, cry over the smallest thing. Aidan may look at her the wrong way and she’s wailing like a banshee! And this would be my biggest concern with her with regards to sending her to school in September.

Is she emotionally ready for it? And if she’s not, and I do send her, will she struggle the whole way along? It’s a tough one.

She really wants to go. Almost all the kids in her class at the moment are going on to Junior Infants in September. And if I leave her off, will she be bored in Montessori next year?

There’s a couple of kids in her class at the moment who are not long gone three and she comments all the time on how young they are and that she’s not too fond of playing with them.

If I leave her there for another school year she’ll be mixed in with even younger kids again. She so wouldn’t be impressed by that!

I am a December baby, and I was sent to school when I was still four. I never stayed back and I never really struggled in school in any way. I bet my mother didn’t give it a second thought either!

Back when I was small, kids were sent to school really early just to make up the class numbers in our rural school. Oh how times have changed!

I think, on the whole, she is ready.

Even now, in some ways, she’d buy and sell Aidan.

They do say girls are more mature, and it really is true in Sarah’s case. Well, apart from the crying!

She has the vocabulary of a 50-year-old and the musical tastes too — do you remember the column about her fondness for Brendan Shine!

Her attention to detail is quite impressive, and she has five times more patience than her brother.

When Aidan was four I didn’t even consider sending him to school. He was nowhere near ready. He was as giddy as the proverbial goat.

Indeed he still is, but he’s calmed down significantly!

He had the attention span of a goldfish back then, and he took orders from absolutely nobody! Fast forward to last September and he was very ready and he has settled really well in to school.

As I mentioned, he does have a tendency to be giddy but that’s just the way he is. He love the craic!

However, he is flying with his school work. He has made shed loads of new friends. He loves his teacher and overall he just loves going to school. It was his time.

I’d safely say that I’m going to send Sarah in September. She will be five in the December anyway.

I just hope I don’t regret it. I dearly hope she is emotionally ready. She’s ready in every other way, in my opinion.

She’ll go ballistic if she’s not allowed go! It’s not even March yet and she’s asking me to go and get her a uniform, a school bag and a new lunch box!

There’s no backing out of it now. Let’s just hope I’m making the right call!