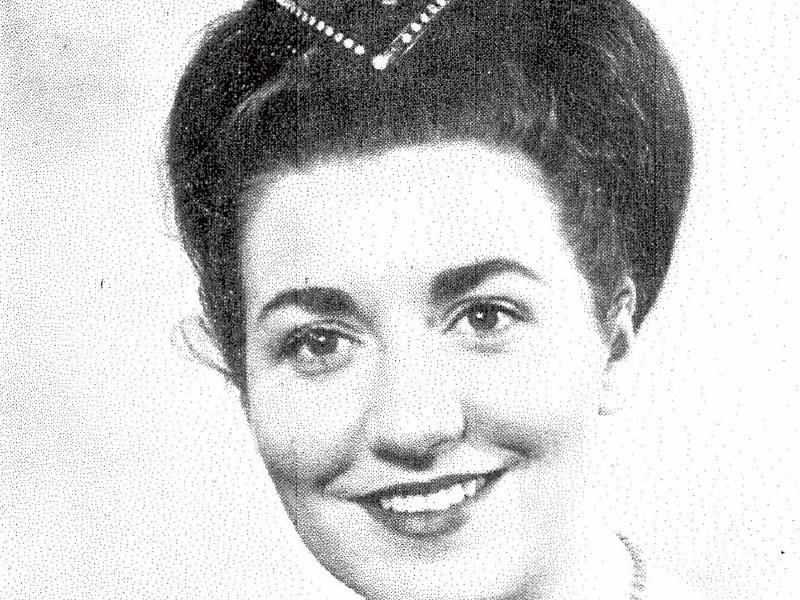 Mary Sheridan de Bruin (soprano), who died on January 8 last, was born in Naas in 1938, where she lived for many years before moving to Dublin.

Known as “Ireland’s most popular soprano” in the 1960s, 70s and 80s, it was not only Mary’s voice that was applauded but also her personality.

It was warm, outgoing, unaffected and totally devoid of pretension, and won over her audiences. In opera and oratorio, in light musicals and solo recitals, her capacity to charm with her beautiful voice and personality embraced all occasions.

Mary was one of four children of Francis and Elizabeth Sheridan from Naas. She had two sisters, Mena and Concepta, and one brother, Frank Jnr. Her mother, known as Lil, worked for Mrs Brigid Lawlor’s catering business. Mary always attributed her success to her mother, saying: “The road was a hard one and had it not been for my mother’s help and encouragement, I would never have made it.”

She also paid tribute to her teachers: Sister Conleth of the Mercy Convent, Naas, and Mother Lazerian of Presentation Convent, Kildare.

On leaving school, Mary began to commute to Dublin for singing lessons with the well-known Oliver O’Brien, whose father, Vincent, had been voice coach to the famous tenor John McCormack.

Mary became a member of the Radio Éireann Singers in 1956.

About this time she was awarded a scholarship by the Italian government to study in Rome and Lake Como with the great Italian coach, Carmen Milis, who had taught Renata Tebaldi, one of opera’s greatest-ever sopranos.

On her return to Ireland, Mary’s career blossomed and she became one of the most sought-after singers in the country, making her debut in Tannhauser in 1962 with the Dublin Grand Opera Society.

In May 1964 she performed opposite a young Luciano Pavarotti in La Traviata at the Gaiety Theatre in the Festival of Italian Opera.

She also took the role of Countess Di Coigny in Andrea Chenier at the same festival.

Mary made many appearances on stage, radio and television throughout the USA and Canada and, of course, the length and breadth of Ireland.

Mary was a member of the Moat Club in its early days, when it was called Naas Table Tennis and Dramatic Club when its premises was at the primary school of the Christian Brothers at the Fairgreen (now Pat Goulding’s hardware shop).

The soprano gave many recitals in her home town of Naas over the years, in venues such as the Church of Our Lady and St David, the Town Hall and Lawlor’s ballroom.

In 1966 Mary married Dutch electrical engineer, Rinus de Bruin and they had one daughter, Nicola. She is married to Kieran Quinn, and they have two children, Nicolas and Aisling.

Mary’s Funeral Mass was held at Our Lady of Good Counsel Church, Killiney, on Friday, January 11, and was followed by cremation afterwards at Mount Jerome Crematorium in Harold’s Cross.