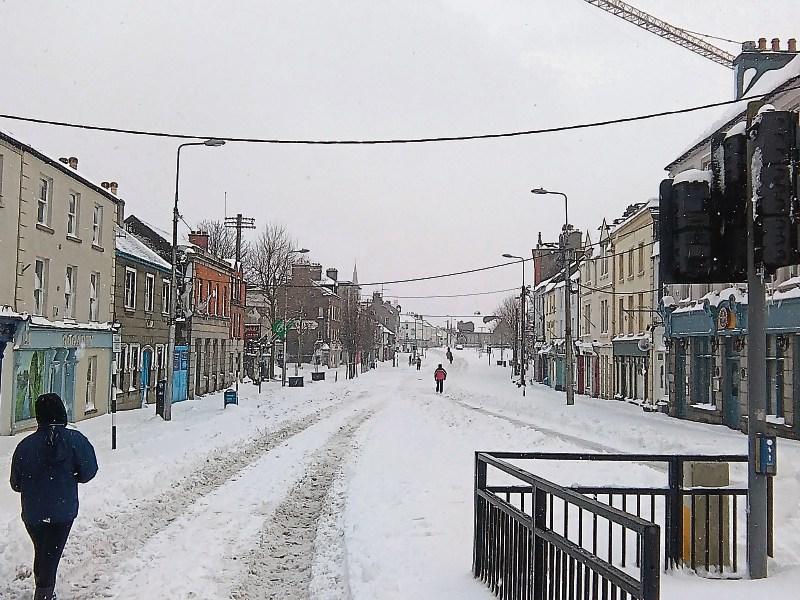 Naas town centre in the middle of the big snow of 2018 PICTURE: PAUL O'MEARA

Snow is set to fall and roads turn icy says a Met Éireann weather warning which enforced until the weekend.

The five-day Status Yellow snow-ice warning for Ireland issued on Monday morning ahead of what the forecaster will be a very cold week. MORE BELOW TWEET.

The warning also says there will be scattered wintry showers, frequent across the southwest, west and north. Some accumulations of snow are expected. There will also be widespread frost at night with icy stretches on untreated surfaces.

There is the possibility of a more significant spell of sleet/snow on Thursday.

TODAY - MONDAY 28TH JANUARY
Cold today with a mix of cloud and sunny spells. There will be some showers across the west of the country, extending eastwards during the afternoon but a good deal of dry weather overall. Highest temperatures of 4 to 8 degrees in mostly moderate west to northwest breezes.

TONIGHT - MONDAY 28TH JANUARY
Clear spells and some showers early tonight with frost developing. Showers will become more widespread across the country later in the night, turning to sleet and snow in places towards dawn. Minimum temperatures of -1 to plus 2 degrees in mostly moderate westerly breezes.

TOMORROW - TUESDAY 29TH JANUARY
Showery rain, sleet and snow will clear eastwards into the Irish Sea on Tuesday morning leaving a cold day with sunshine and wintry showers. The showers will be frequent in the southwest, west and north and will fall increasingly as snow. Maximum temperatures of 2 to 5 degrees in moderate to fresh westerly breezes.

Tuesday night will be very cold and mainly dry with clear spells. Wintry showers will continue in the western coastal counties, with falls of sleet and snow away from coasts. There'll be a widespread sharp or severe frost and icy patches. Lowest temperatures of -3 to +1 degrees.

Wednesday will continue very cold with sunny spells and scattered wintry showers. Some will be sleet or snow, especially in northern areas and on hills and mountains. Highest temperatures of 3 to 7 degrees with mostly light west to northwest breezes. On Wednesday night, severe frost and icy patches will develop.

Thursday will start off mainly dry. Rain, sleet and snow will gradually spread from the southwest. It will be very cold with temperatures of just 2 to 6 degrees and moderate to fresh easterly winds. Frost and ice will develop on Thursday night along with further wintry showers.

Friday will continue very cold with sunshine and further wintry showers. Highest temperatures of 3 to 6 degrees with moderate to fresh northerly breezes.

Next weekend will continue very cold with sunny spells and wintry showers. there'll be frost and ice at night.