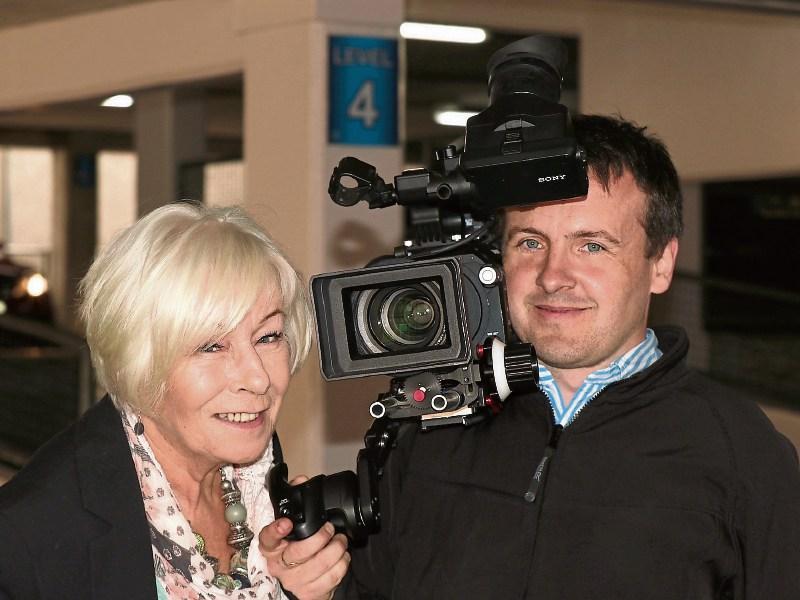 In a village in north Kildare there is a television production company.

Based in Allenwood, Dundara Television & Media has been quietly going about its business and building an impressive portfolio of creative projects.

Founded in 2008, the company has toiled many a furrow through the challenging world of the television and creative industry.

“We’ve had to. It’s a difficult industry and there has been so many changes in the last ten years. People consume television and content in a very different way now. A very instant way.”

Ten years ago, Enda realised there was a massive growth about to take place in the world of online media and he got onboard.

“I had a video camera in my hands since I was about nine and was obsessed. I did my first wedding when I was fourteen and dabbled in that industry for the next ten years or so. I was obsessed with doing it right. I was obsessed with learning and giving something different. I have no formal media training at all. In fact I studied acting and drama after I left school.”

Growing up in Allenwood, Enda’s father, Paddy, who is originally from Carbury, worked in Allenwood ESB for over 40 years until it closed. His mum, Mary is Allenwood born and bred. In fact, the couple are celebrating their 50th wedding anniversary this February.

Enda went to national school in Allenwood and secondary school in Scoil Mhuire in Clane.

“I was heavily inspired by one of the teachers, Pat Breslin who is a long standing member of the Moat Club and encouraged my acting and media participation,” he said.

That world opened up for the Allenwood man after finishing his course as he spent the next number of years acting professionally.

“I went straight into a play immediately after finishing drama school which toured Ireland for four months including a run at the Abbey’s Peacock Theatre.

“My first ever screen appearance was as a criminal on Crimeline. All my friends and family gathered around to see me play an absolute gouger,” he laughs.

Stints on Fair City, Ballykissangel and Reign Of Fire followed through his nine years in the business and that experience in front of camera gave him a unique insight and preparation for his future career as a producer and director.

“I was diagnosed with scoliosis as a child and wore a back brace from age seven to 17,” he explains.

“I was told then that it shouldn’t ever deteriorate as I had stopped growing. Ten years later I had my consultant tell me the curve had dramatically increased and I had two choices, do nothing and with the ongoing progression potentially have a life span of about 10 years or have the surgery and as I was older there was a chance of not walking again. It was very sobering.”

Spending over 12 months in recovery gave him plenty of time to think and look towards the future.

“I had been working for current county councillor Daragh Fitzpatrick at the time and he was very good to me but I knew it was time to push on and make a real go in the media world so I bit the bullet and set up Dundara,” he says.

A number of years building a portfolio of clients in the relatively new world of online web video followed. Setanta Sports saw some of that work and came calling. Dundara made a number of

Dundara Television & Media commercials for them.

“That obsession with perfection was beginning to pay off. I’ve always told our crews if you don’t strive to be the best in the business in your chosen field why bother!”

In 2014, a call came that altered the course of Dundara dramatically.

A new television channel called Irish TV was about to launch on the SKY platform and the powers that be wanted Enda and his team to provide programming including a new weekly lifestyle series about County Kildare called County Matters.

The experience in the end proved to be a double edged sword but the Dundara owner acknowledges it was quite a springboard.

“I’m a proud Kildare man so this series was of great interest. Dundara went from really just myself to a full time crew of 12. We were soon making a huge amount of programmes across all genres.”

In addition to County Matters, Dundara was producing a popular weekly agriculture series Grassroots, a trad series Play It By Ear, Jimmy’s Heroes with the late great Jimmy Magee and a series on the Irish short film industry Beyond The Lens.

The highlight however was always the live programming.

“I suddenly found myself producing live television. The director alongside me was renowned news director Theo O’Grady who spent over 40 years in the RTE newsroom”.

“This was the first ever live two hour entertainment show ever broadcast from the county and it’s still my proudest achievement. The biggest production we did was twenty one hours of live broadcasting from the 2016 National Ploughing Championships. It was mammoth and I’ll always be grateful to the crew that put so much work in”.

Dundara rose quickly through the ranks of Irish TV with Enda becoming series consultant for the whole of Ireland.

In November 2016 the company was hit by an almost fatal blow.

Irish TV was going into liquidation.

“It was devastating” according to Grace.

“I never knew stress like it. It was such a blow. I had crews to pay and we had put so many eggs in the Irish TV basket. To compound matters my wife Fiona and I had one year old twin girls and suddenly, just before Christmas, everything was pulled from under us. We were owed a substantial amount of money and the dawning that we would never get it was almost too much to take.

“Thankfully the crew were very understanding but almost everybody had to be told that there was no more work. The liquidation and the process that ensued was very painful.

“We had two options” according to Grace, “lie down and lick our wounds or fight hard to push forward. We did lick those wounds over Christmas but then with the support of family and friends it was time to harness the contacts and experience gained through Irish TV and drive forward”.

The crew was now back to three — Enda, his wife Fiona who looks after accounts and creative executive and presenter Alan Brereton, who is hails from Coill Dubh.

“It was very much back to basics” according to Grace.

“It was a bit like starting again but this time being more selective about projects and stringent about the financial side. We made the decision to freelance back in crew on a project basis.”

Since that regeneration of Dundara, the determination of its founder has thankfully paid off.

Grace admits that they took some chances creatively and firmly crossed their fingers.

“In this business you have to take some risks but the rewards are great if they pay off” he explains, “But calculated risks.”

He points out the company now has a very solid client base for online content creation running alongside the development of television and radio projects.

The company also facilitates media training and current clients include public representatives and two of the major financial and consultancy firms in Dublin.

It was also selected to partner with Google in the area of virtual reality and is official media partner to Kildare GAA.

In early 2018, Dundara Television & Media was commissioned by its client Tipperary Crystal to develop and produce a Christmas television commercial.

This was its second such collaboration following on from last years successful Katie’s Plan.

“This year’s Gifts From The Heart developed into a lovely warm television ad showing the importance of family especially at Christmas and ran on RTE and Virgin Media. We also create a lot of content for the company for Ireland AM, Xpose and The Late Late Show.”

The commercial was filmed over two days and nights in April in Athy and Clane in Co. Kildare.

“We’re now a tight team here at Dundara and everybody is on the same wavelength creatively” says Grace who also edited Gifts From The Heart.

“That was a huge logistical process as we needed Christmas in April. Two very large snow machines were brought in and with the great support of Patricia Berry and people locally we turned Athy into a Christmas wonderland.”

Alan Brereton produced and performed the soundtrack to the commercial.

2019 is shaping up to be an exciting year for the Kildare company.

They’re in talks for a major educational partnership with Enda having guest lectured on various media courses over the past two years.

For TV then Dundara has two feature documentaries and a docu-drama at various stages of development.

“One in particular is extremely exciting. It really is a one off and one of those that rarely comes around.”

A number of television commercials are also slated for development and production as well as online content creation for their existing and new clients. Exciting times ahead indeed.