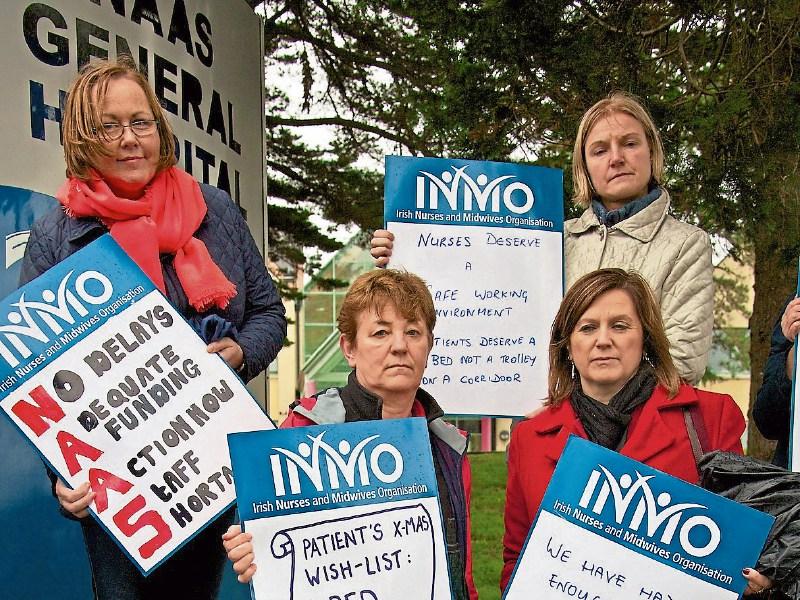 Members of the INMO pictured outside Naas Hospital in 2014

Talks have been taking place between nurses representatives as well as the Department of Health and the Health Service Executive.

Nurses are seeking a 12% increase in pay and this has been costed at €300m.

They say this is needed to recruit and retain staff and they say they want parity with other health care workers. There has been criticism of the pay demand becasue it breaches the public service stability agreement which runs until 2020.

If the strike goes ahead it will affect all public hospitals in the State.

It will also be only the second time nurses have gone on strike in a century and first since 1999.

Nurses and midwives are scheduled to take part in a series of 24 work stoppages, the first of which has been pencilled in for Thursday January 30.

The precise impact on Naas hospital is as yet unclear because the INMO is still in talks with the HSE about arrangements for managing the strike.

“We’re agreeing some principles nationally which will then be implemented by local strike committees,” and INMO representative told the Leader last Monday when asked about the likely impact on Naas Hospital.

They says the union is legally required to give one week’s notice, but has given three to allow for safety planning.

Should the dispute go unresolved, there will be further 24-hour strikes on February 5 and then again on the 12th, 13th and 14th.

The strike will see INMO members withdraw their labour for 24 hours, providing only lifesaving care and emergency response teams.

The dispute centres on safe staffing in the public health service.

The INMO adds that the HSE has not been able to recruit and retain enough nurses and midwives on current wages.

INMO General Secretary Phil Ní Sheaghdha said: “Going on strike is the last thing a nurse or midwife wants to do.

“But the crisis in recruitment and retention has made it impossible for us to do our jobs properly.

“We are not able give patients the care they deserve under these conditions. The ball is in the government’s court.

“This strike can be averted. All it takes is for the government to acknowledge our concerns.”