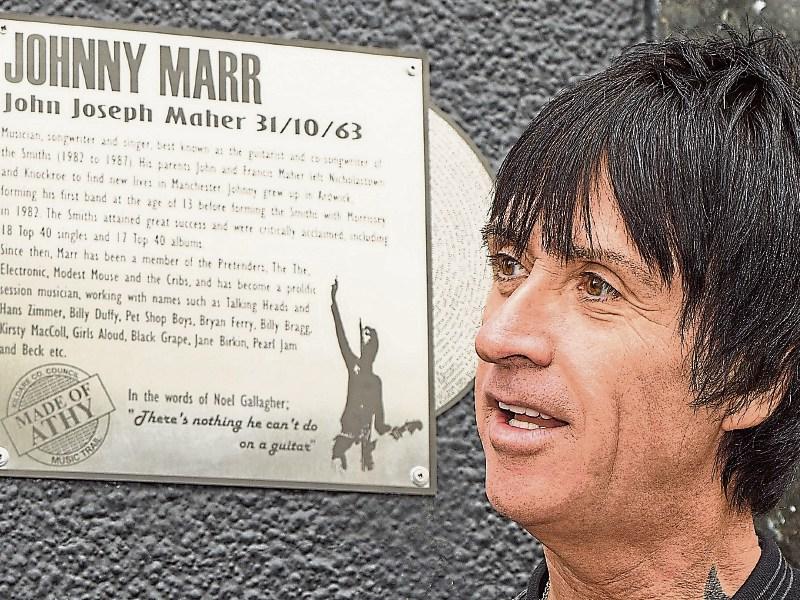 The legend that is Johnny Marr of The Smiths, attracted a huge crowd to Emily Square, Athy

For many years Athy native Colm Walsh would tell friends that some of the world’s greatest rock stars came from Athy, or at least their mammies did.

All that time it was a great yarn to tell, a ‘you learn something new every day’ moment.

But this year he decided to do something about it, and from that germ of an idea grew a wonderful project that sought to celebrate those links, and create a compelling tourism trail in the meantime.

A total of 24 people will be honoured by the time it is finished, with Johnny Cash who played a gig in the Diamond Ballroom in Athy in 1963 being the first to be honoured.

But it was the pairing of Johnny Marr of The Smiths and Mani of The Stone Roses that really caught the imagination. Their mothers were neighbours on the same tiny rural roadway in Maganey, who both emigrated to Manchester.

Johnny Marr was the guitarist and one of the main songwriters in The Smiths, along with Morrissey. The band’s career was reasonably short but their influence, and especially Marr’s guitar playing defined an era for many.

Mani was in The Stone Roses, another band that defined an era, before moving to Primal Scream and Ocean Colour Scene.

Next came the turn of Bill Hughes, a television and radio producer whose plaque unveiling was visited by Panty Bliss and U2’s drummer Larry Mullen Jnr.

Bill first came to public attention when he was a producer on MT USA, a weekly music television show that brought the American charts into Irish living rooms for the first time ever in the 1980s.

Mr Hughes noted that he was returning to his home town with his husband and contrasted that with a time when he was growing up when being gay was far more difficult.

Erin Antilla (nee Koivisto) is a Finnish pop star that Mr Walsh met when he lived for a time in Helsinki.

She was part of a band called Nylon Beat that was top of the charts in Finland for much of the late 1990s before embarking on successful a solo career.

Her mother Christine, was the daughter of Paddy and Molly Cullen of Rathconnell, Fontstown. Christine met Erin’s father, Pertti Koivisto, a Finn who had emigrated to London.

A plaque was erected in her honour outside Paddy Dunne’s Pub, picked, she said, “because it was where my father and grandfather used to drink together.”

Liam Óg O’Flynn, the piper was also commemorated, outside Clancy’s pub, which was his local for many years.

Unfortunately, Liam Óg passed away earlier this year, but his widow Jane was present for the unveiling.

From Kill originally, Liam was one of the founding members of Planxty and considered to be one of the most significant figures in traditional Irish music.

Other artists to be honoured will include Neil Hannon of the Divine Comedy, Aldo Nova (songwriter for Celine Dion) and of course local man Jack Lukeman.

Despite the cheerful and celebratory nature of the plaque unveilings, it was an emotional occasion for all those honoured thus far.

“We all want to feel a part of a community of sorts,” said one person familiar with the project.

“There is a tremendous sense of homecoming for many of them, a sense of renewed belonging.”

All those who spoke to the Leinster Leader were moved by the whole experience.