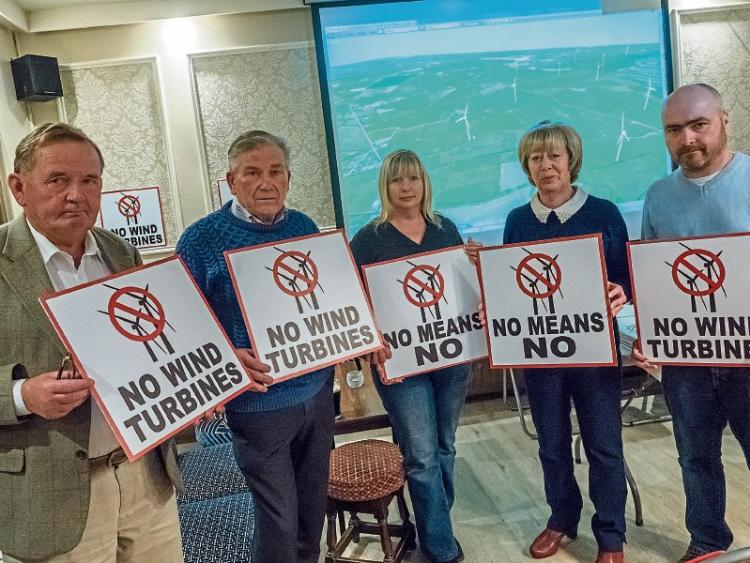 Members of the Drehid Against Wind Turbines group with Cllr Brendan Weld at a previous meeting PIC: T Keane

A group of residents in North West Kildare have expressed their anger over a new planning application for 12 industrial wind turbines by North Kildare Wind Farm Ltd.

The 12 turbines, if approved, will be located on both Coillte and private lands in the areas of Ballynamullagh, Coolree, Drehid, Dunfierth, Killyon, Kilmurry and Mulgeeth.

The previous wind developer, Element Power Ltd which was involved in the proposed 46 turbine Maighne wind farm which spanned North West Kildare and South Meath, has sold it's company to Statkraft, a Norwegian company.

This new application singles out the Drehid Cluster of the original Maighne project, which was refused twice by An Bord Pleanala. Element Power had originally proposed 14 turbines for Drehid, but has reduced that by two in the planning application.

A new group, Drehid Against Wind Turbines formed when the the plans were first mooted and it said it will be helping people with their objections against this "outrageous proposal".

"The outdated 2006 Wind Energy Guidelines were published when wind turbines were 50 metres in height. New Wind Energy Guidelines have been promised by Fine Gael since 2014 and still have not been published in spite of 7,500 submissions. There is still no protection for communities from these loud roaring industrial monsters. Kildare constituents have been badly let down by this Government," he said.

"Nothing has changed in the feelings of the residents of Kildare since the 'Maighne Wind Farm' refusal and vow to fight this new application."

Drehid Against Wind Turbines will host a public meeting to discuss the situation in The Hamlet Court Hotel in Johnstownbridge on Tuesday, January 8 at 8pm.

"The public are urged to attend to protect Kildare," added the spokesperson.

The sale of Element Power took place in October with the majority of the staff transferring over to Statkraft.

The directors of North Kildare Wind Farm Limited are Kevin O'Donovan, Cork; Ola Idland who hails from Eiksmarka near Oslo; and Halcon Skjerstad, who also has an address in Oslo.

It's understood Statkraft has taken over all Element Power's UK and Irish projects except for the Greenlink Interconnector. The transaction was completed on October 2 and is an acquisition of 100 per cent of the shares in Element Power's Irish and UK subsidiaries from Element Power's principal owner Hudson Clean Energy Partners AIV LP.

Element Power has previously said that thousands of people live beside wind turbines all over the world without any problems. It said it was embarking on public consultation with the homes in the Carbury/Drehid area about the plans prior to submitting them for planning.