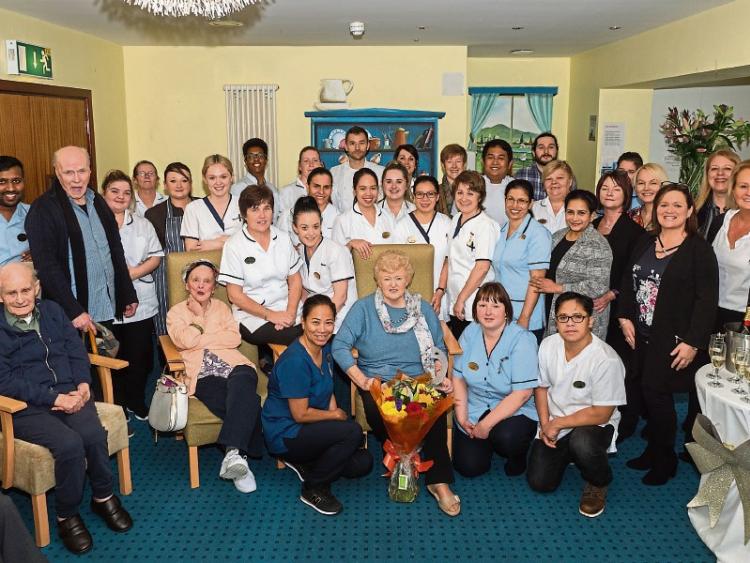 Nursing home proprietor Ellen Dillon has been honoured by the industry’s representative body.

Known to many people as Nellie Dillon, she established her first nursing home in Newbridge in 1977.

And at the time it was the second nursing home in County Kildare.

When it opened it had 42 residents and this has now grown to some 75 residents.

She has been a very well regarded employer in Naas for three decades and the business currently employs over 90 staff.

Her daughter Sara now manages the day to day running of the nursing home but Ellen retains an active role on the management team.

Ms. Dillon was one of the founders of the nursing homes association in Ireland, now Nursing Homes Ireland.

She worked tirelessly for the organisation for the past 41 years. She was associated with the implementation of the Nursing Homes Act 1990, which among other things provided for the registration and regulation of nursing homes.

Ellen has brought tremendous passion to the care of the older person, she has always promoted high standards of care and was always at the forefront of projecting the industry in a positive light.

Ellen was awarded the NHI lifetime achievement award — which is made annually — at the NHI annual awards in the Citywest Hotel in November. It was presented for her outstanding contribution to the Irish nursing homes sector.

NHI is committed to ensuring the lives of older persons in the 4 private and voluntary nursing homes across the country are enhanced and fulfilled.