Travel the world, be famous, be a Lillywhite and be proud, Macunian tells crowd 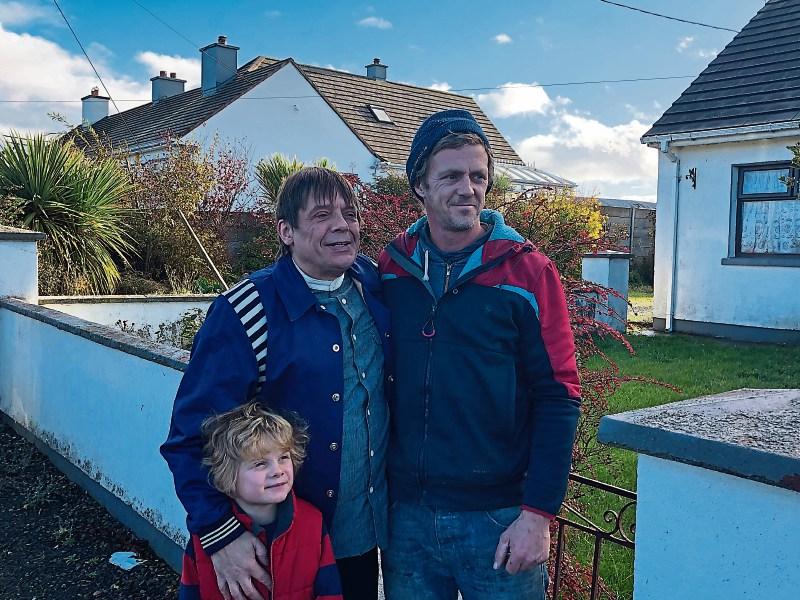 Mani, left, his son George and Adrian Lee, the current owner of the house Mani's mother grew up in, in Maganey on Saturday afternoon.

Mani, otherwise known as Gary Mounfield, the bassist of supergroup Stone Roses is the latest artist to be honoured for his links to Athy as part of the Made of Athy initiative.

Last week was the turn of Johnny Marr, the guitarist of the Smiths, and Mani, whose family were near neighbours of Marr’s in Maganey, was similarly honoured earlier today in Athy.

When completedly, there will be 24 Made of Athy plaques around the town, honouring musicians who have a link to the town. It is expected to be a huge tourism draw to the south Kildare town.

In the hours before the unveiling of a plaque in his name, Mani, his wife and two young sons visited the cemetary in Maganey to place flowers on the graves of his mother’s family.

He told his sons that part of his mother’s ashes, were buried. “Her heart is in Ireland,” he told them.

Read also: WATCH: Smiths guitarist Johnny Marr says he never forgot his Athy roots as he is honoured in the Kildare town

Shortly after, accompanied by relatives including his cousin Geraldine, he visited the house his mother, Anne Patricia Farrell, and her six siblings grew up in.

The current owner of the house, Adrian Lee, was there to welcome them.

A few doors down was where the Doyles lived, one of whom was Johnny Marr’s mother, Francis.

Soon after 3pm this afternoon, Mani was feted in Athy, where Arts Officer Luccina Russell admitted she was a bit star struck because the Stone Roses got her through her three years of college.

Mayor Aoife Breslin said she hoped it was the “first of many many visits” and that “the door is always open”.

And local Athy man Colm Walsh, who initiated and has organised the Made of Athy project, told him that Emigrant Bar at Emily Square, where the plaque in his honour has been placed, was once the location of the bus stop in the town and it is likely that his mother caught the bus from that spot on her way to Manchester. 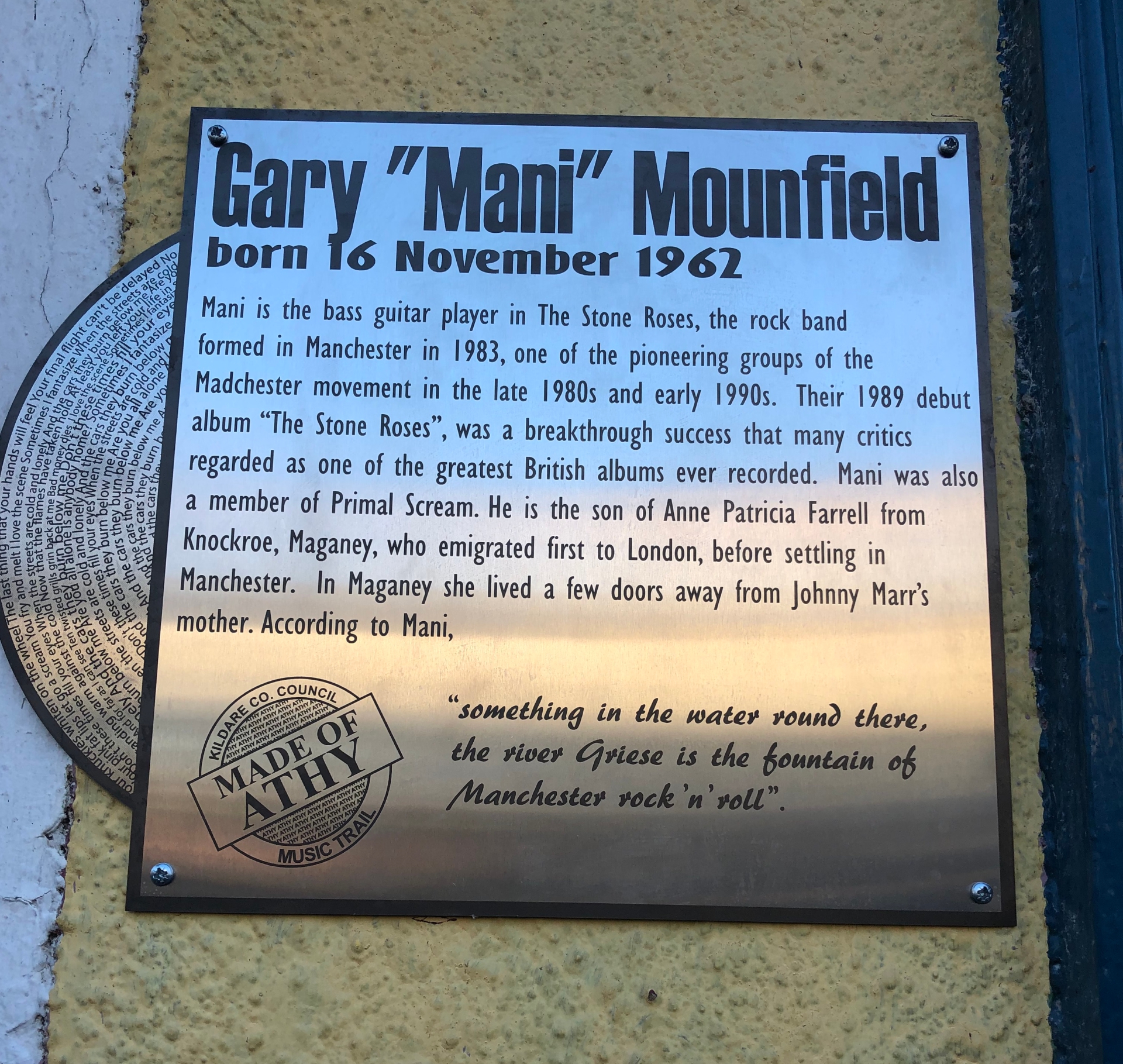 The plaque outside the Emigrant Bar to honour Mani

“Welcome back,” he told the pop star who has also played with Primal Scream and Ocean Colour Scene,

“Travel the world, be famous, be a Lillywhite and be proud,” Mani told a crowd of more than 100 who attended the occasions.

“You know what, that was absolutely bloody amazing,” he told the Leinster Leader later on over a pint.

“In a non-America plastic Irishman kind of second generation returnee, I do feel very welcome.

“There’s always been an attachment for me here, even though all my family have moved from Maganey to Manchester, there’s always still been a connection there.Usually when we come back here it’s to bury people, but to come back and celebrate. It’s the first time I’ve been here for a non-funeral reason.

“And I brought my kids here with me. It’s important for me that they know and for them to know where their family is from, so we took them to the graveyard and said ‘Look, there’s your auntie, there’s your uncle and so on’.

And he revealed that he has begun the process of getting his Irish passport.

“I was always going to do it, pre-Brexit, but now the Brexit thing has really pushed my buttons. I want to be European, I’m not English. Manchester people aren’t English.

So, we don’t consider ourselves to be English. English people are in London - where the Queen and all of them are!

“I suppose it’s the same in Liverpool,” he reflected.

He explained that all  of his mother’s family moved to England. “Except for uncle Christy, who was the youngest of the kids, and when Grandad Michael died, he was so young they farmed him out to a family who lived in Moone. And when he was buried, it was in the graveyard of who he considered to be his mother.

“Johnny Marr told me that his mother was farmed out and it was my family who brought her up, or something along those lines.

“It was big Irish families back in those days with no tv and the rhythm method obviously doesn’t work,” he laughed.

“So three of me uncles, me mum and a sister all moved to England to make something happen. There was no work here, and a tie was lost in many ways.

“Uncle Christy ended up moving to Thurles, in Tipperary, where the Trip to Tipp happened and we played there and I never even knew. We had lost contact with him, but we eventually found him again, which happens.

“He was amazing! What a guy that man was. He only died a couple of years ago.

“It was always important to me. This visit will reinforce that for them, and they’ll know where it all started.”