Robert Mulhern on how he was served up a surprise history lesson on one of Kildare’s lesser known historical sites, Dún Áilinne 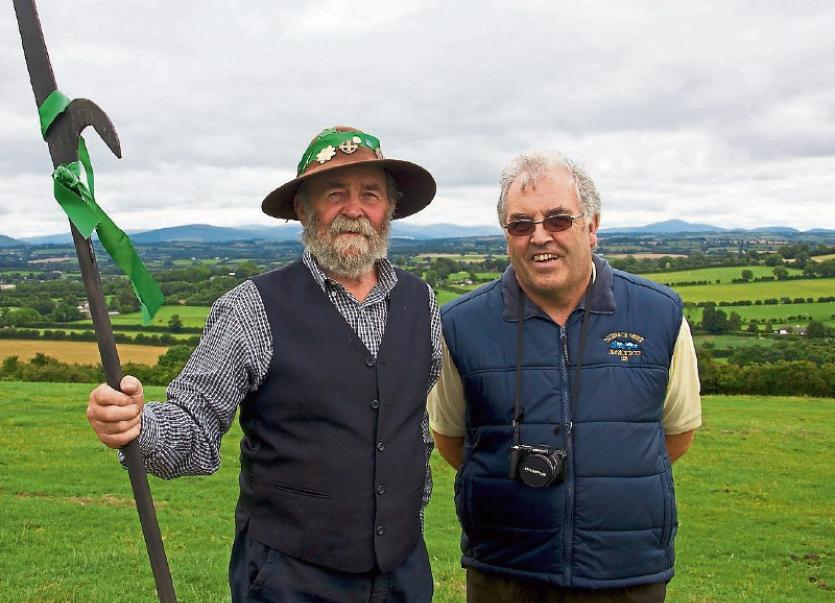 File picture: John Duffy, from Narraghmore, pictured with Pat Goulding from Kilcullen at a Kildare Archaeological Society event at Dun Ailinne, Kilcullen, in 2013

The last time I heard of Strongbow, I’d yet to drink a can of it, and Diarmuid MacMurrough… remember him? Well, I must have been in third class and wrapping 88-page copy books in brown wallpaper when he last figured in any conversation.

That was until Fergal Keane’s 2011 documentary series The Story of Ireland popped up on BBC iPlayer last week and it stirred me from my slumber to hear again about an Ireland that existed centuries before that British gunboat the Helga sailed up the Liffey and pounded the GPO.

Watching this programme just reaffirmed what I’ve long been thinking — that Ireland’s history beyond the last one hundred years has been lost to the tsunami of coverage that accompanied the 1916 commemorations, and will no doubt accompany the commemoration of our independence.

Though rightly recognised, the glut of books, TV programmes and shed load of coverage related to same has seriously relegated all that went before.

I’m no history buff. I enjoy a bit of context about our past as much as the next proud Irishman, but it was almost novel to be reminded of Earls taking flight from the island and deckhands from Spanish Armada taking shore leave in Mayo.

And, just as I was coming to terms with the fact that I was being served up a history lesson about my own country from the British state broadcaster, up popped the kind of location that has been relegated to history’s back alley.

It’s called the Hill of Uisneach in County Westmeath and it sounded so like the Hill of Allen, it may as well have been an estranged twin.

I suppose you could say it was the grassy Dáil of its day, a meeting place that was once at the heart of ancient Ireland and something a scriptwriter from the Game of Thrones could only dream about.

I googled it and quickly realised that unlike the Hill of Allen, this place is fast becoming a popular tourist attraction.

There is some natural advantages with the Westmeath equivalent however — like half the hill being intact for starters.

And then there must exist some kind superior tourism promotion gene in the Lake County that we are so obviously lacking in Kildare.

Because who ever could have imagined that an organised tour of ancient site steeped in mythology would prove popular with visitors — heck, maybe even lucrative.

So taken was I with the Westmeath edition that I called a tour guide who declared that that no, he wasn’t a genius at all, just an enterprising Westmeath man who thought this a good idea.

Inevitably, after I explained where I was from, comparisons with the Hill of Allen — now quarried to within an inch of its existence — followed.

But to my amazement and embarrassment, the tour guide mentioned another site in Kildare of great significance — Dún Ailinne, one of great royal sites of early Gaelic Ireland, he said and believed to have been where the Kings of Leinster were inaugurated

It got much worse when he told me this place, just a dozen miles out the road from where I grew up, was so historically substantive that its been nominated for Unesco World Heritage status.

I knew this to be a big deal but I googled other world sites, just to get a read on what he was talking about and Skellig Michael, the historic centre of Rome and the walls of Jerusalem emerged.

Now, maybe it’s my own ignorance but I do wonder how I’ve managed to get through 40 years without ever really hearing about this place.

And in these government-promoted-Ancient- East-times when we’re promoting our ancient past as far east as erm, Cork, there’s some kind of communication malfunction in this Dún Ailinne being a thing of cult interest rather than existing in the mainstream.

And do you know what, I’d love to go out there one day and for someone to give me a tour of it.

Maybe that is possibly, but if that’s the case people should know.

In fact — and you might find this hard to believe — were this service available it would be something I’d be happy to pay for.

But, judging by our national focus for all things 1916, you probably won’t hear anything about Dún Ailinne again.

Because if the Hill of Allen is anything to go by, we’re not very good at things like this in Kildare. And if anything, this is something people in places like Westmeath are much much better at.