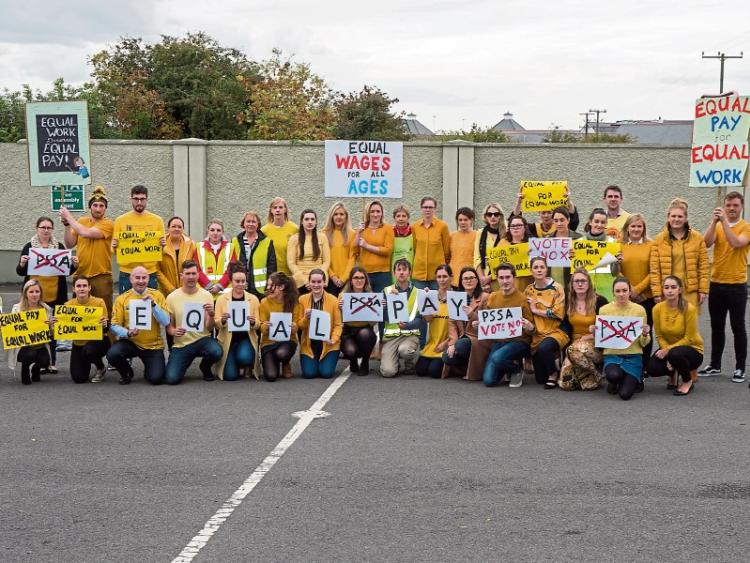 Teachers of St. Brigid's NS in Kildare town during the demonstration on October 5

Teachers in Kildare town and across the county staged a demonstration last Friday, October 5, to highlight pay inequality in the teaching profession.

One third of teachers at St Brigid’s Primary School in Kildare town are on the lower paid scale, according to one teacher. The two-tier pay system affects teachers hired post 2011.

One young frustrated teacher, who wished not to be named, spoke to the Leader about how he has lost out on thousands because of pay cuts made under the Haddington Road agreement.

“I’ve lost €30,000 so far and I graduated in 2013. We all had to play our part in the economic recovery but I’m going to lose another €20,000 with this new Public Service Stability Agreement.

“The way the Public Service Stability Agreement is set up is that teachers who are suffering the longest are still going to suffer, and teachers who have qualified in the last few years, they’re going to get their pay equality.”

According to teachers, the Public Service Stability Agreement, which was recently proposed by the government in order to tackle this issue, does not provide full pay equality. Graduates from 2011 to 2014 will continue to lose money, up to €20,000 in some cases, and newer graduates will not see the benefits of this deal until 2026.

“In the last couple of years the economy has started to recover. We’re just looking to be treated fairly like the other teachers in our staff room”, added the young teacher.

“It’ll take very little money to fix it completely. If we just accept that agreement, it’ll be another 10 years before anything is done about it.

“My partner’s a teacher as well, and the two of us put together will lose thousands with the Public Service Agreement Services over the course of our career, so it’s a fair whack to put towards a house, never mind children down the line.”

The INTO is now balloting its members on whether or not it should accept this deal. Balloting ends on October 24, and should a majority of two-thirds reject this pay

agreement, then primary school teachers will be balloted for industrial action.

According to the Teachers’ Union of Ireland, the proposal provides for the removal of two increments (4 and 8) from the various post January 1 scales from March 1 2019, meaning that newer entrants will progress up the scale quicker.

In a statement they said; “The Union has said that while the proposal represents further movement, it won’t deliver pay equality. The Union is not issuing a recommendation to members on whether to accept or reject the proposal. The Union’s Executive Committee decided that members should be provided with comprehensive information on all aspects of the proposal so that they can make their own considered decision on its acceptability or otherwise. The Executive Committee noted that the proposal has varying implications, depending on grade and career stage.”

Ballot papers must be returned by 5pm on October 25 and the ballot result should be known by October 26.

“TUI has made it clear that the crisis of teacher recruitment and retention in schools across the country as a result of pay discrimination will continue. As a result of this, schools will struggle, and in many cases fail to recruit and retain suitably qualified teachers across a range of subjects.” The Union stated that irrespective of the ballot outcome, its campaign will continue until pay equality has been delivered.”

SEE ALSO: Emma Mhic Mhathúna to be laid to rest in Maynooth tomorrow