Kildare cancer survivors rally the troops for Relay for Life 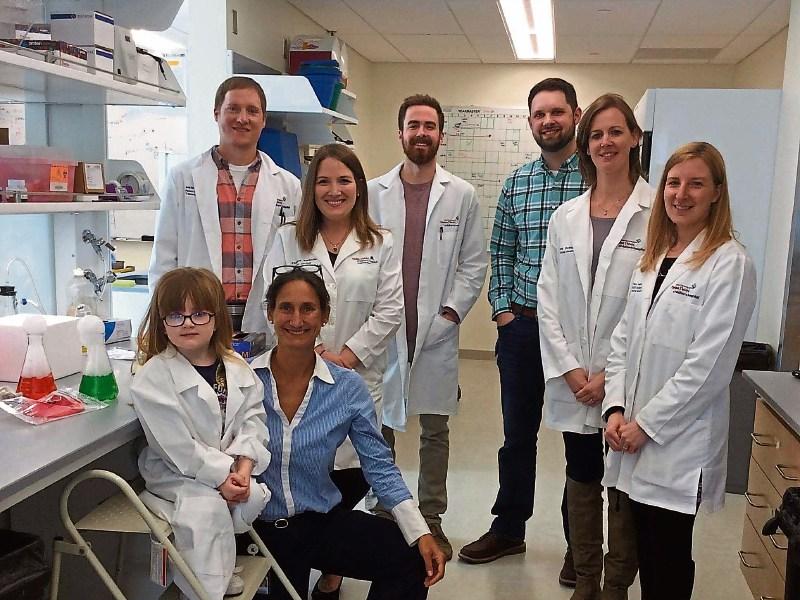 Clodagh Daly pictured on her last trip to Helen DeVos Children's Hospital in the research lab with consultant Dr Sholler and her team at Grand Rapids, Michigan

Clodagh Daly was just five weeks old when she was diagnosed with an agressive form of cancer.

From that day on, her family have been propelled on a journey that no family should have to endure.

” Our lives were shattered the day we were told Clodagh had cancer and too find it was quiet an aggressive form of cancer was just mind boggling,” said her mum, Tammy.

“You go from having this beautiful little precious baby, being such an ecstatic new mom on top of the world, to being told to christen her ASAP.

“I would find myself driving to Crumlin for admission with Clodagh and planning her funeral, what songs to play, would we cremate her or bury her. It was horrendous.”

For the past five years the Clodagh has undergone the most gruelling of treatments including chemotherapy, raiotherapy, and stem cell replacement. She just recently returned from the last of her sessions for a clinical trial in the US at the end of April.

The Dalys, who live in Kildare town, are thrilled with her progress and Clodagh remains in remission from Neuroblastoma.

Over the past three years, they have had to make make many trips to the Helen DeVos Childrens Hospital in Grand Rapids.

“She is in junior infants at Scoil Mhuire in Newbridge and they have been just brilliant. She is at heavy risk of picking up infections quite quickly and she gets it hard to get rid of them but they have been so lovely,” said Tammy.

Clodagh’s journey was in the spotlight from an early age as the community rallied around to support her and her family.

This brought her to the attention of the Kildare Relay for Life committee, who asked the five year old Scoil Mhuire student to release doves as part of last year’s ceremony.

Relay For Life is a 24 hour event that brings the community together to celebrate the lives of cancer survivors, remember those lost to the disease and fight back by increasing knowledge of cancer and raising money to fund vital research and services of the Irish Cancer Society.

“Seeing Clodagh last year at the Ceremony of Hope in remission and doing so well was just such an emotional moment for us as her parents,” added Tammy.

“We are so thankful to all the Relay for Life committee for having us and especially Clodagh involved. She loved doing her ‘jobs’ and still talks about the birds flying away and how fun it was.”

The Dalys plan to attend this year’s event which will take place at Punchestown from September 15 and 16.

Tammy describes Relay as an emotional experience and was blown away by how everyone came together from all over the county to share their experiences.

It’s seldom that you can really compare real life people to superheros, but Amy Mahon from Newbridge is certainly a superwoman.

A cancer survivor herself, she is now one of the core members of the committee that organises the Kildare Relay for Life every year.

Back in February, she was named Irish ‘Global Hero of Hope’ to mark World Cancer Day.

Heroes of Hope are cancer survivors who inspire hope, courage and determination in the fight against cancer.

Amy joins ‘Heroes’ from countries including South Africa, America and Germany who have been recognised by the American Cancer Society.

Amy was diagnosed with thyroid cancer in 2012 aged 29.

Two years previously she was diagnosed with a borderline underactive thyroid and by the time her cancer was discovered it had spread to her lymph nodes. She had her thyroid removed and radioactive iodine treatment.

This required the single mum to be in isolation for five days, away from her five-year-old son. She spent a further 10 days in semi-isolation at home.

“I was radio active, I couldn’t even hug or give my son, Danton, a kiss. If anyone was pregnant, they wouldn’t have been allowed to be near me. It was Christmas morning by the time I could give my son a hug,” she explained.

Amy is now five years cancer free but the removal of her thyroid has resulted in lasting complications.

Despite this, the nail and lash technician is determined to live her life to the full.

Speaking at the time of the award presentation she said: “Cancer has changed my life. I had to change my career and lifestyle and I have some health complications but I don’t allow this to define me. Cancer made my life new, not different.”

Amy was supported by the Irish Cancer Society during her treatment and as a result got involved in the Society’s Relay For Life, Kildare.

Three year’s ago, Amy put in her own team called Amy’s Angels supported by her family, her mum Cathy and granny Helen. She is now in charge of looking after the survivors at the event and she had received such positive feedback. The survirors are the real heros of the weekend and are treated like VIPs with free holistic treatments, hair, nails, a two course meal, goodie bag and much more.