Ardclough couple Gemma and William are heading for Sorrento 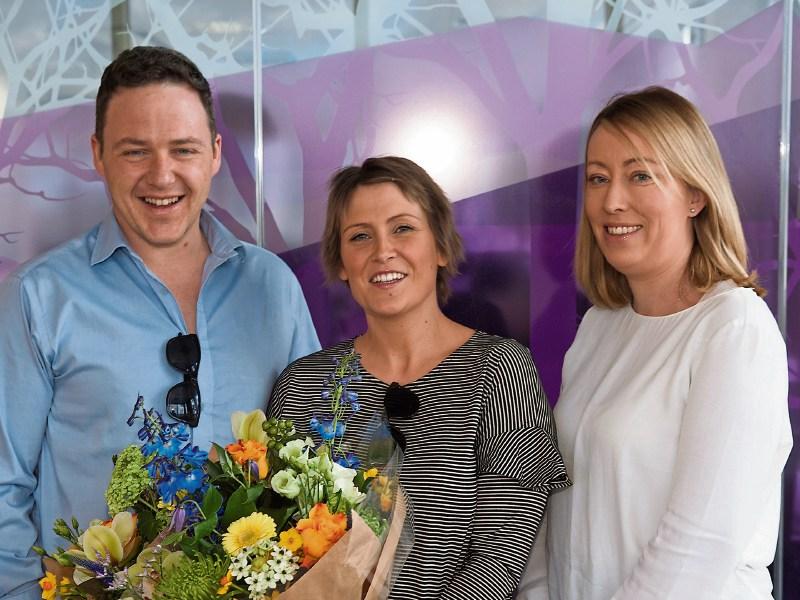 The lucky couple, William Moore and Gemma Kearns with Michelle Anderson of Topflight

An Ardclough couple have won an amazing Italian holiday with travel agent Topflight who conducted a competition for Ireland’s most romantic couple.

Gemma Kearns and William Moore won the prize after their moving story of love triumphing during sickness won the hearts of the voting public on social media.

Later in the summer they will be whisked off for a week in stunning Sorrento and enjoy a taste of luxury at a four star Hotel Bristol which is nestled into a cliffside above Marina Grande, and  boasts spectacular views sweeping right across the Bay of Naples to Mount Vesuvius in the distance. They will also enjoy complimentary day excursions to explore the spectacular surroundings of Sorrento including the Amalfi Coast and Pompeii and Mount Vesuvius.

The couple entered the competition by recounting the story of how they met and their lives since then. The couple met on a night out in January 2013... “he was out for a friend's birthday as was I, but it ended up that we spent very little time with our friends as we spent the night speaking to each other until the lights came on and it was time to go home... but not before William asked me for my number.

“He messaged me the next morning and we haven't gone a day since without speaking to each other. He arrived for our first official date with the most fabulous bunch of flowers and treated me to a lovely meal... albeit after he remembered he had forgotten his wallet and made a quick return to the car after our starter...that could have been his chance to run!

“We spent the following few months together and only really separated to go to work. In May 2013 William left to make a permanent move to Canada... we knew this was planned but didn't realise how close we would have become... fast forward two months with lots of Skype calls and messages and William told me he was coming home!”

Gemma explained that William has become her best friend and when she decided to travel to Mexico for treatment on her MS in 2016, a  decision had to be made as to who would travel as her carer. “I knew he was the person for the role... and being William he didn't hesitate to step into the position. For the next year William supported me to fundraise for my treatment as well as bringing happiness and lighthearted fun to lessen the stress through his sense of humour and activities he would plan.

“He took to the dancefloor in a Strictly Come Dancing fundraiser, took up running, bag packed, sold raffle tickets and even joined Slimming World with me.... I knew he was a very special person and all of this showed me we were meant to be.”

Gemma reports that “after five years together I am still constantly spoiled and surprised with token gifts and thoughtful actions from  my favourite chocolate bar after a bad day to my car cleaned like a professional job to surprising me at work with a spontaneous afternoon out.

“We have so much in common yet are so different that we compliment each other. There is nowhere I am happier than at home with William and our 40kg puppy.... there are plenty of good relationships but there really is something special about a relationship that has been through all that we have and still leaves us feeling like we have the perfect little life together.”