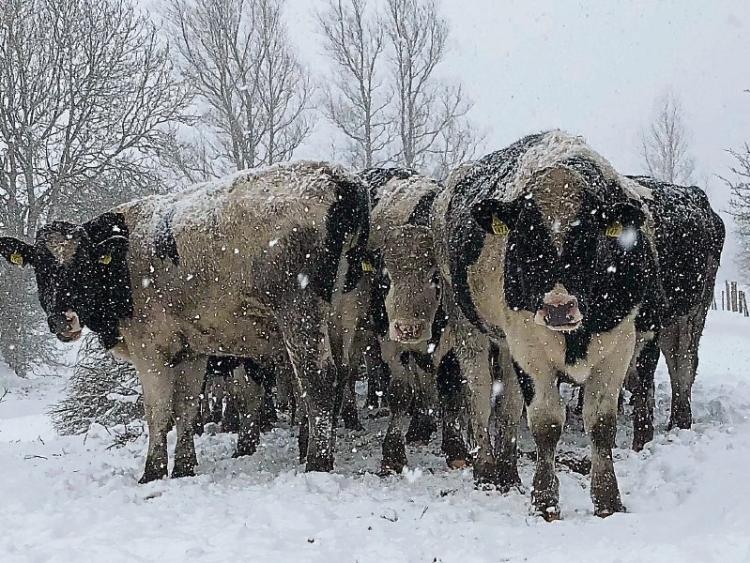 Cattle huddle in the snow at Blackwood, Roberstown

So what did we learn from the snow? I mean, we must have learned something — it took us all by surprise and imprisoned us at homem.

This white stuff fell from the sky in enormous quantities and our entire lives had to be put on hold because we weren’t ready for it, weren’t able to cope, had no experience of anything like it.

And yet, here we are, all compos mentis, still upright, still breathing, hearts pumping. We survived, somehow.

So, we must have figured out some stuff.

Here’s a smattering of what I figured out, in no particular order.

Although certain vehicles, namely four wheel drive ones, are better able to deal with snow, they are not invincible. The difference is between being able to progress in the snow, and not.

Cars with rear wheel drive, like most Mercedes, BMWs and Lexus are worse than useless. You’re better off in the wellies.

I had access to a 4x4 on the Saturday afternoon of Storm Emma and managed to get down to the shops, but quickly realised that the biggest problem on the roads was people who were deluded into thinking that they either knew how to drive or that it would be ‘grand’.

My greatest obstacle was navigating around stuck cars.

Speaking of wellies, a shocking number of people don’t have any. This came as a great surprise to a fella like myself from the bog, but there you go. That might be something they learned.

There’s a brand of waterproof gear called Sealskinz. They have one product which are waterproof socks which have a silicon band around the top of them. And they’re absolutely brilliant!

I also learned that animals such as cattle and horses will stand together in snow, with their backsides to the wind. And that once settled into this unusual position, they will ignore the copious amount of food, bedding and shelter that you have waded through four foot drifts to bring to them.

I learned that it is possible for the weight of snow to break through perspex or glass rooves, such as glass houses, and that you’re as well acting long before the snow starts to accumulate.

I learned that, in the right circumstances, people can be really neighbourly and terribly good.

I heard of numerous instances of people checking on neighbours, of clubbing together to clear out driveways and footpaths. I saw in one estate, a spontaneous good natured snowball fight break out, inbetween footpath clearing.

I saw people walking through the streets of a small village looking for cars push out of drifts.

I heard of a man opening long closed stables for a neighbouring farmer whose ewes were lambing.

I learned that the enormous network of small country roads in the north of the county can overwhelm the County Council and that if it wasn’t for the endless goodwill of owners of tractors and JCBs that many of us would be still stuck in.

I learned that much and all as we can’t fathom the notion of going without alcohol for a day on Good Friday, the thought of going without bread could make Irish shoppers empty the bread aisles of the largest grocery shop in the country.

But perhaps best of all, I learned that when the going gets tough, we remain, steadfastly the funniest nation on earth.

The jokes going around about bread were epic. Within minutes of the looting of the Lidl in Jobstown, it was being called the “Dawn of the Bread”.

A video ended up on Facebook of a drone flying over a load of back gardens with a load of Brennan’s bread. It doesn’t matter what nature throws at us, you’ll never beat the Irish.