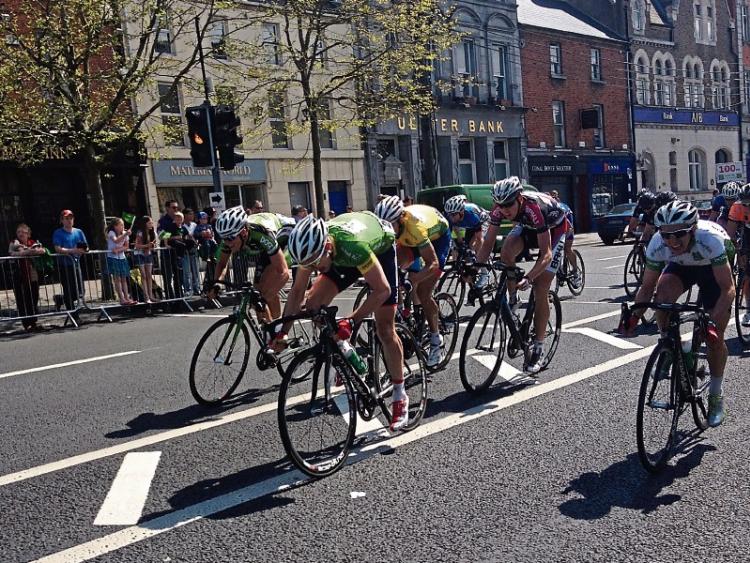 A final sprint on Naas Main Street in the 2013 edition of the RAS. It will return to Naas on May 27.

Ireland’s premier cycling race, known for many years as the An Post Rás is returning once again to Kildare in 2018 as the Rás Tailtean, which was the historic name for it,

The route of the event was unveiled recently and take place between May 20 and 27, with no less than 34 climbs set to slow legs and quicken pulses.

Totalling eight days and 1,168.7 kilometres in length, the race will begin in Drogheda on May 20 and end in Skerries on May 28..

The seventh stage on Saturday, May 26, will see the race travelling between Carlow and Naas, with the 141 kilometre leg through Wicklow dotted with eight climbs including the Annagh Gap, the lung busting Shay Elliot and the Wicklow Gap before going over the hill into Hollywood and on into Ballymore Eustace and Naas.

The following day, May 27, is the final day of the race. It will leave Naas and head for Newbridge before coming out through Milltown, over the Hill of Allen and on into Kilmeague, Downings Cross, Prosperous and on towards Kilcock before heading into Meath and ending the race with a few laps of a finishinjg circuit in Skerries.

The 2018 route is expected to be particularly hilly.