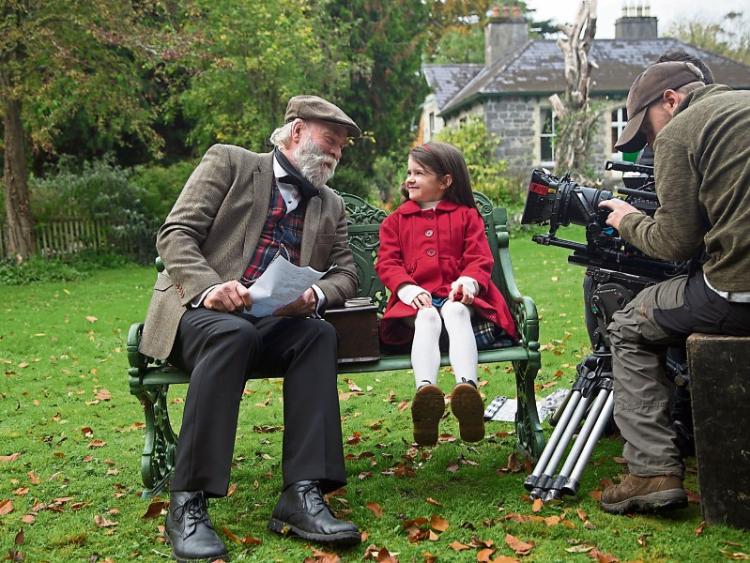 Degnan Geraghty, who plays Grandad, and Isabel Connolly, during the filming of 'A Timely Gift'. Photo: Kenneth Cassidy

A nine-year-old girl from Clane has been nominated for a Best Young Actress award in Los Angeles.

The short film ‘A Timely Gift’, directed by Padraic Keane, has been selected for the First Glance Film Festival in LA. It stars young Isabel Connolly from Clane, and she has been nominated as ‘Best Young Actor’ at the independent film festival.

Isabel, a pupil at Vicky Barry Performing Arts in Clane, is a familiar face to Irish audiences as she starred in an Expressway TV commercial in 2016. She and her sister Ruby also appear on billboards in the Dublin Airport departure lounge.

The film’s lead Degnan Geraghty has also been nominated as ‘Best Actor’ at the festival. The 22-minute long film, which was shot in County Offaly, is about a woman suffering from amnesia who receives a gift left for her by her grandfather before he died. This gift could be the key to remembering her past.

Isabel is a pupil at Scoil Bhride, Clane, and was accompanied by her mum Mandy to the set.

“She absolutely loved it,” Mandy previously told the Leinster Leader about her daughter’s appearance in the film.

Director Padraic Keane predicts great things for Isabel. “She was brilliant. She’s going to be a future star, I’ve no doubt,” he said.