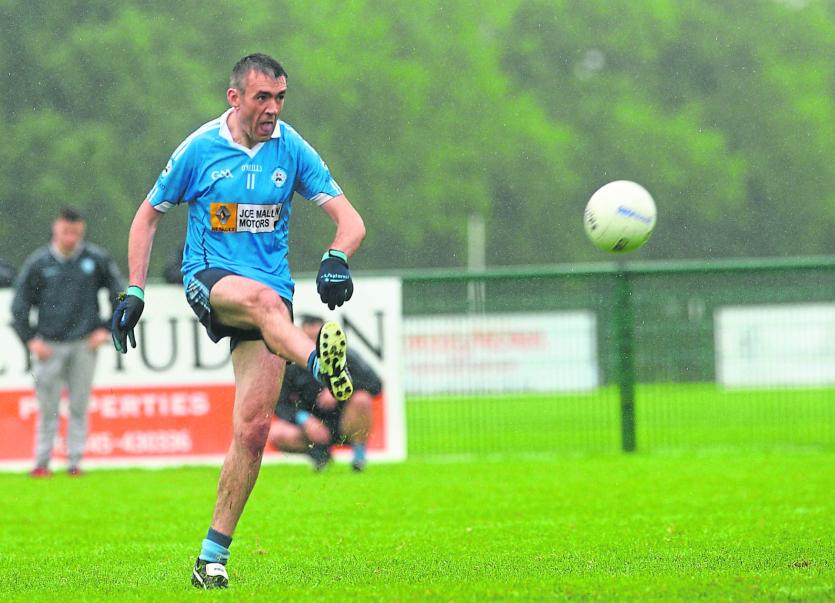 Johnny is from Allenwood and is the only boy of the Doyle family, with three sisters, Niamh, Lynda, and Frances. His parents are both from the parish of Allen. His father Harry is from Roberstown and mother Phyllis Moore was from Kilmeague. Johnny is married to Siobhan, and has three girls, Sarah, Orla and Aimee.

I remember my first day at school, and my Ma walking myself and my sister Niamh up to Allen school. I can remember going into the prefab out the back, and Miss Callahan welcoming all the junior infants. I was put sitting beside a boy called Paul Kenny (RIP) and we became the bests of buddies for years to come.

DID YOU ENJOY GROWING UP IN KILDARE?

Growing up in Kildare, like most children who grew up in the 80s, was of a very simple life, full of happy memories. Lots of my early memories were based around football, surprise surprise. My Da played for Allenwood so for as long as I can remember I was down in Sean Tierney Park kicking ball. My Granny Moore owned the shop and post office in Kilmeague and we spent many days helping in the shop, from bagging potatoes to stacking shelves.

A lot of my early memories also involved time on the bog. Long summer evenings footing or bagging turf and the midgets as big as bats eating you alive and the father telling you to pretend the sods were sweets and you’d be finished quicker. I was very fortunate to live at the foot of the Hill of Allen where we spent so many days exploring the ancient home of Fionn MacCumhaill, we built huts and went into war, just like the Red Branch knights had done hundreds of year before.

GREATEST SPORTING MEMORY AS A CHILD?

It was the first success the club had in years and it was a lift to the whole community at the time.

WHAT ARE YOUR PROUDEST ACHIEVEMENTS FOR CLUB AND COUNTY?

They are very proud achievements, but as I get older I think the fact that I got the opportunity to represent both club and county on good days and bad fills me with pride.

GREATEST LEADER YOU EVER WORKED UNDER?

Mick O’Dwyer was a massive influence on my development as a player, and I lived on his every word.

He got lads to do things that not many could get them to do and they didn’t complain or moan just got on with it, so that took some leadership.

Kieran McGeeney was an inspirational leader, as a player and as a manager. He was different than Micko in his approach, but like Micko got lads to think differently and get rid of excuses.

The other is Glenn Ryan. Glenn is a born leader. He welcomed me the first night I arrived in Hawkfield to train. Which was massive for a young lad who was unsure if he should be there at all.

He had such passion for Kildare to be successful. He expected nothing of others that he wouldn’t give himself, and he drove Kildare to great things. In my eyes he was the greatest.

GREATEST PLAYER YOU EVER CAME UP AGAINST?

It would be very hard to name one. I’ve played against some of the greatest players that have ever graced the playing fields both in Kildare at club level and on the national level.

Got a few direct roastings from some tough players down the years. It’s hard not to mention the likes of Colm Cooper as he will go down in history as one of the greatest.

I do alot of work with the underage squads in the county and I’m looking forward to working to see if there’s another Ronan Sweeney or Dermot Earley on the horizon.

I’m holding out to see who the new junior manager is for Allenwood before I polish the boots for the year ahead.