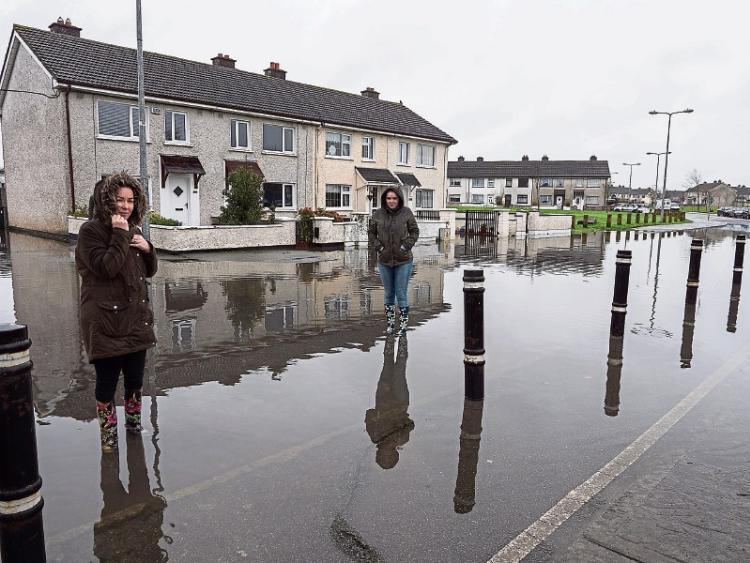 Flood waters rose, threatening homes with sewage and debris floating into gardens, paths and roads. No homes were flooded, but more than 30 years on, this problem is still reoccurring, and residents are fearful for the future.

Massive insurance hikes have hit hard, with one Dara Park resident paying an annual premium of €1,100 with an excess of €5,000 due to the estate’s horrendous record.

“The smell of sewage coming up the sinks is terrible. This is going on years, 42 years, it’s shocking,” one angry resident told a public meeting at the Newbridge Family Resource Centre on November 29.

This latest flooding episode came just three months after a similar incident, which wasn’t as serious, but nevertheless posed problems for the Newbridge estate.

The meeting, chaired by Residents chairman, Joe Burke, heard that locals, especially those from the four houses which are most at risk, are fed up with the lack of progress.

“If there is heavy rain tonight, it’s a guarantee that those houses are going to be flooded with sewage again,” said Mr Burke.

At the outset, he said the council had informed him the flood relief works were a success and the reason for the recent flooding was down to a blocked culvert, which was on land owned by Iarnród Eireann. He said the council now has protocol in place so it can access the land to clean out the grills on a monthly or quarterly basis.

“Why did it get to that stage? That protocol should have been put in place when the works were being done to prevent this from happening,” he said.

He said he wanted a meeting with Irish Water.

Cllr Joanne Pender said Irish Water plans to carry out a major project, which will increase the capacity of the sewerage network in Newbridge, however, this won’t begin until 2020.

She said the council said there had been poor connections made to the sewerage system, some illegal, which were causing problems.

She suggested that perhaps these could be fixed in the short term.

She told the meeting the council was satisfied the €300,000 flooding works had worked, but the culvert blockage had caused the problem.

“The council has expressed their sympathy with your frustration,” she said.

Cllr Sean Power suggested a delegation meet with the new council engineer in the New Year.

He said it was important that every house make a list of the problems to present to the council. He said councillors would work with the residents to try and get the issues resolved.

The residents said cameras had been put down drains, surveys undertaken and information handed over to the council on countless occasions through the years.

Cllr McLoughlin Healy suggested residents ask for an independent review of the report carried out for the council on the flood relief works.

A week later, Cllr Pender was informed by Irish Water that the planned works would address the problems.

Irish Water said it is working with the council to deliver the Upper Liffey Valley Regional Sewerage Scheme, which is being done under two contracts.

It said the second contract will address wastewater issues in the sewer network including at Dara Park.

Work on the first contract will begin in 2018 and it will take two years to install a new interceptor sewer connecting Newbridge to the wastewater treatment plant at Osberstown.

The second contract will involve an upgraded sewer in Newbridge undertaken during 2020.

It said there is “no other localised short term solution to this problem.”

It said the primary reason is the lack of sewerage capacity and it understood the disruption caused to residents and businesses in the town.

“Irish Water can commit to ensuring that local operations staff are available following such rainfall events to investigate and clean up as required,” it said.