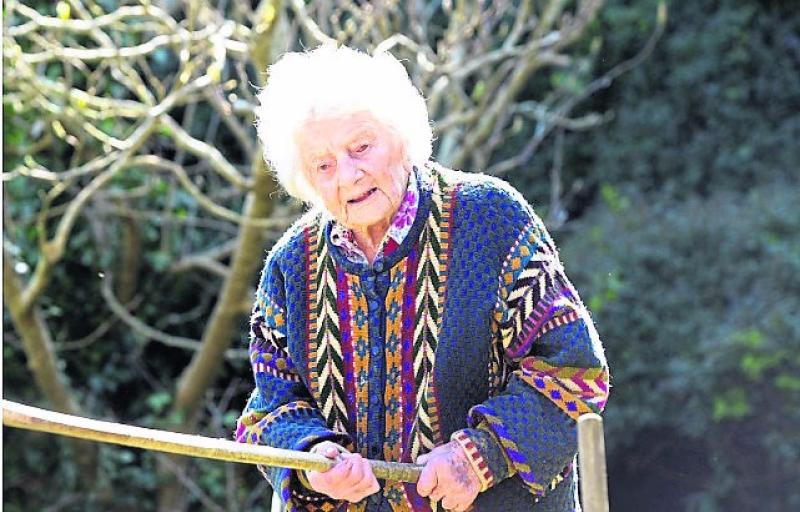 Dorothea Findlater, who died on November 20 last, was believed to be the last person alive who witnessed the 1916 Rebellion.

By coincidence, her father actually played a significant role in it.

Born on St Stephen’s Day 1909, she passed away a few days shy of her 108 birthday. She was the daughter of Captain Harry de Courcy Wheeler and his wife Selena Knox and spent her early years in Robertstown House, just at the top of the hill of Robertstown.

Both her grandfather and uncle were Presidents of the Royal College of Surgeons; her grandmother was a first cousin of George Bernard Shaw.

Her ancestry includes great sporting achievements also. Her father won the high stone wall championship at the Dublin Horse Show in 1904. Her mother and two aunts played hockey for Ireland.

Her uncle and ‘great friend’ Jack Knox played rugby for Ireland, most notably against the All-Blacks in 1906.

In a 2010 interview for the Irish Times with historian Turtle Bunbury, she recalls that Robertstown House “wasn’t what you would call a farm, but we had cows for our milk, and hens, pigs, ducks and lots of dogs.

“There were six of us children so we didn’t really need anyone else.

“There was always someone to play with, to swim in the Canal or ride a horse or play tennis or hockey.”

Bunbury reports that also on hand was her cousin Elizabeth de Courcy-Wheeler who lived just five miles away in a huge Victorian house at Drummin, near Carbury.

Her recollection of the village of Robertstown is interesting to anybody familiar with it.

“It was very go-ahead in my day… It had everything. A tailor, a shoemaker, a bakery, a police station, a post office and a hotel.”

In April 1916, she stood on top of the Victorian red-brick water-tower in the Curragh Camp and watched the dark clouds billowing over Dublin city.

Her father was in the middle of it, speeding around the city in a motorcar, with bullets and bombs whizzing all around him.

Mr Bunbury reports that Captain de Courcy-Wheeler, her father, spent much of the week driving his black Ford through the streets of Dublin.

Before he left for the city from the Curragh, he wrote ‘Sinn Féin Rising reported in Dublin’, in his diary.

And he took the famous photo of Pearse’s surrender, from which Nurse O’Farrell was subsequently air-brushed from history.

The pair drove from one Republican stronghold to the next, urging the respective commandants to heed the surrender.

Many years later, the now retired Captain de Courcy-Wheeler organised a turf-cutting competition which was opened by Eamon de Valera, the only leader who did not surrender directly to him.

“I’m a lucky man,” remarked Dev. “Any leader who surrendered to you was executed!”

“He was put in charge of James Connolly and told to shoot him if he moved.”

She asked him years later if he would actually have shot him.

Among those who surrendered to him were Constance Markievicz, who was his wife’s first cousin.

Ms Findlater claimed that she did not go to school and was therefore not educated. However she did have a governess.

The family lived at the Clarke Barracks in the Curragh Camp for the duration of the First World War, where she was taught by a series of governesses and read all the classics in her fathers’ library.

After the war, the family returned to Robertstown (which had been locked up during the war years) and she began cycling to the nearby Rectory where Canon Greening helped her to become the first female member of her family to make it into Trinity College Dublin.

Speaking to Mr Bunbury she remembered a period of considerable upset when a close friend was obliged to leave the college at the request of Archbishop McQuaid, because she was a Catholic and Trinity was a Protestant institution.

In 1932, her final year at Trinity, she married Dermot Findlater who was head of the celebrated Dublin wine merchant family and a highly regarded hockey goalkeeper. They had two sons and three daughters.

During the 1930s, she was a Director of Bulmers in Clonmel and she played an active role in the Second World War with the Foxrock branch of the St John’s Ambulance Corps.

“We drove to Westland Row and collected refugees who had been bombed out of their homes in Liverpool. We fed them, washed them and drove them to stay with friends,” she recalled.

After the war, she became a director of the Belfast Empire, the now defunct theatre once famous for its variety shows and charity performances.

One of her roles was to look after the celebrities who were present for Gala performances such as Douglas Fairbanks Jr, Mary Pickford, the Princess Royal and Countess Mountbatten.

Dorothea’s passion for rugby was legendary. Pride of place on her mantelpiece in more recent years were photographs of herself with stars such as Paul O’Connell and Peter Stringer. “There was no one like Stringer for whipping a ball out of a scrum,” she sighed to Turtle Bunbury.

She loved both hockey and golf. Hockey became a particularly strong part of her life in the 1930s when she played with Maids of the Mountain but that came to an end with the birth of her son Alex.

In 1981, at the age of 71, she represented Ireland in the finals of the Daily Mail clubs golf championship played in North Wales.

An honorary member of Carrickmines Golf Club, she was frequently to be seen on the clubs’ putting green, competing for the Seniors Cup.

During his interview with her, she attributed her ever-ready glow and venerable age to good nutrition and a strong sense of humour.

“She also lived by an evidently fruitful mantra: ‘I go on the theory that what you did yesterday, you can do today,” he reported.