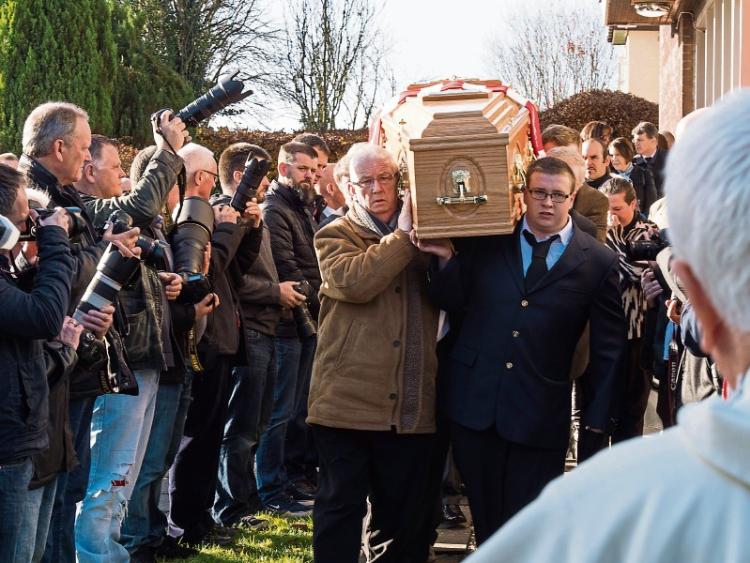 A phalanx of Kildare photographers formed a guard of honour for Adrian Melia as his coffin was carried into Cooleragh church on Thursday morning, the shutters of their cameras clicking a staccato salute as their much-loved and highly regarded colleague began his final journey.

The colourful and larger-than-life Leinster Leader sports photographer, 58, passed away on Monday night last after a long battle with colon cancer.

The Coolree, Robertstown, native inspired many around the county after his battle with the disease became widely-known earlier this year. Several successful fundraisers involving those from all walks of Kildare life raising money for his treatment, including a memorable 'Question of Sport' night in Killashee House, Naas, last June featuring several of Kildare’s sporting greats including Eric Donovan, Cian O’Neill, Glen Ryan, Willie McCreery, Michael Carruth and Anthony Rainbow.

The large congregation at Thursday’s Mass included many of Adrian’s colleagues from his former working life in Naas’ Donnelly Mirrors factory. He took up photography as a serious hobby while working there, and fell into sports photography in 1989 after covering his first match, a junior final between Robertstown and Rheban.

READ ALSO: THE BIG INTERVIEW: Kildare photographer Adrian Melia on his life and battle with cancer

A much-valued Leinster Leader sports photographer, who also contributed to several other publications down the years, he was indefatigable over recent months. Even as his illness grew worse, he took pride in being a constant on sidelines the length and breadth of the county. He rarely missed a match or competition, and was covering games for the Leinster Leader up until last weekend.

Mass celebrant Fr Jimmy Doyle recalled how himself and Adrian were allowed by the Kildare County Board to both sit at the back of the goals at St Conleth’s Park.

“Last Monday night, after being unconscious for almost 12 hours, he sat up and began to take photographs of his family and the people that were around his bed.”

Fr Jimmy remarked on how the parish had fundraised €10,000 towards Adrian’s cancer treatment. “That will give you an indication of the esteem Adrian was held in, and his family, here in this part of north Kildare.”

Adrian’s brother Terence spoke of memories of the two growing up together and the special bond they shared as brothers. He had the congregation in stitches with a rendition of a funny poem of Adrian’s about a worm, before finishing with “Adrian, love you forever” to a warm round of applause.

Adrian was a devoted member of the Toastmasters public speaking organisation and had received several awards for his witty speeches.

His Toastmasters colleague David Clinton delivered the final tribute in the church.

“Adrian Melia, at the age of 10, years received an important present of a camera from his mother. Little did he know how important a camera would become in his life,” he said.

“Paddy loved both her her sons Adrian and Terence equally and unconditionally, but Adrian needed something which would give him direction in life. She would not regret her decision. It was the best of presents. It was the most thoughtful of presents.”

He noted that the late snapper was a colourful character with an equally colourful turn of phrase and dress sense.

“He had more hats and coats and scarves than the Scarlet Pimpernel himself. In olden times, songs would have been written about men such as Adrian.”

He also spoke of Adrian’s many ‘families’ of sportspeople, photographers, those involved in music and the stage. “If you consider yourself to have been among one of Adrian’s families, then you may regard yourself as one of the privileged,” he said.

Mr Clinton then led the congregation in a rousing version of ‘Swing Low Sweet Chariot’ to honour his friend. The funeral left the church to the sounds of ‘You’ll Never Walk Alone’ and ‘Always Look On The Bright Side Of Life’. Adrian was later laid to rest in Allen Cemetery. 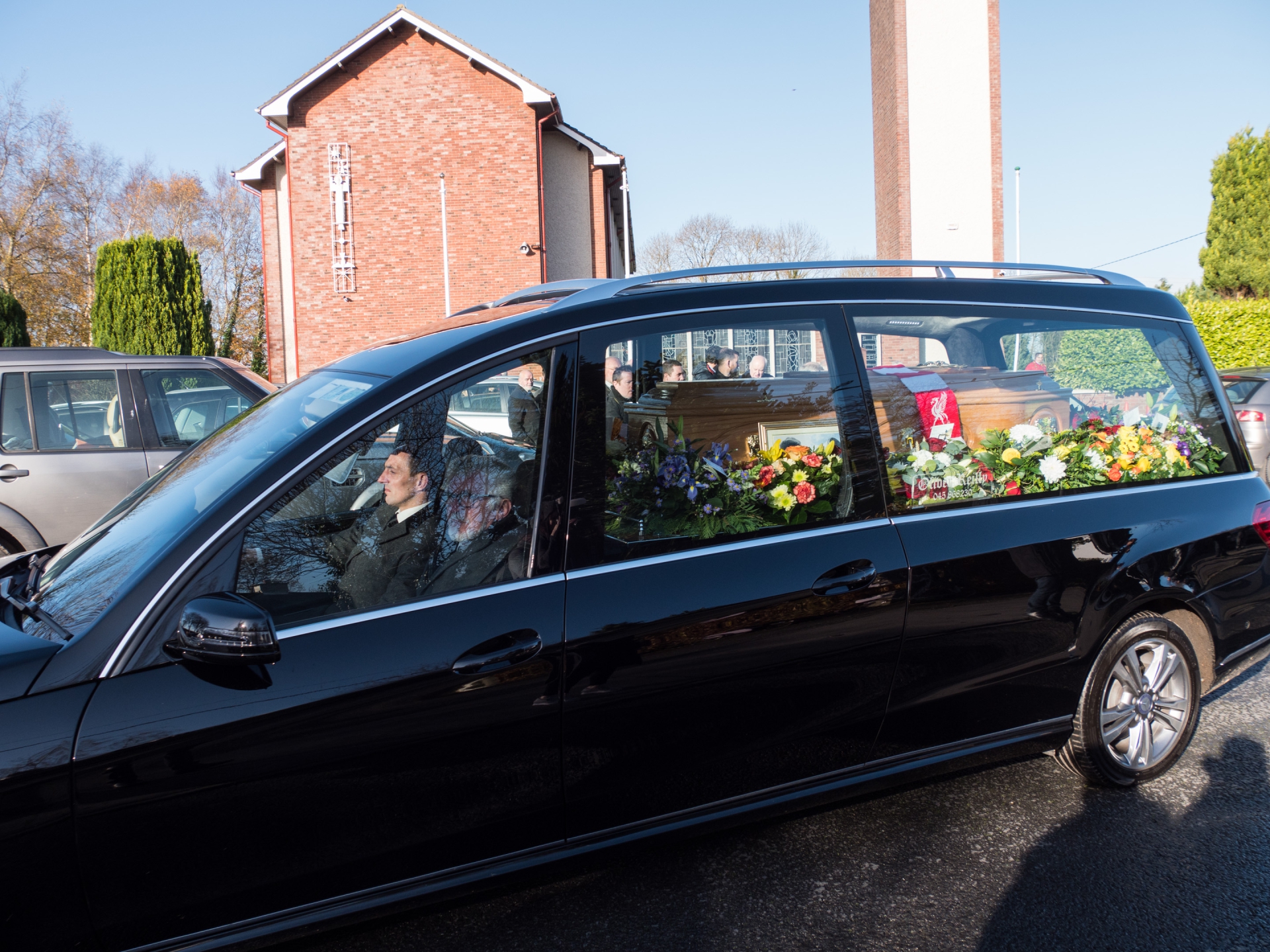 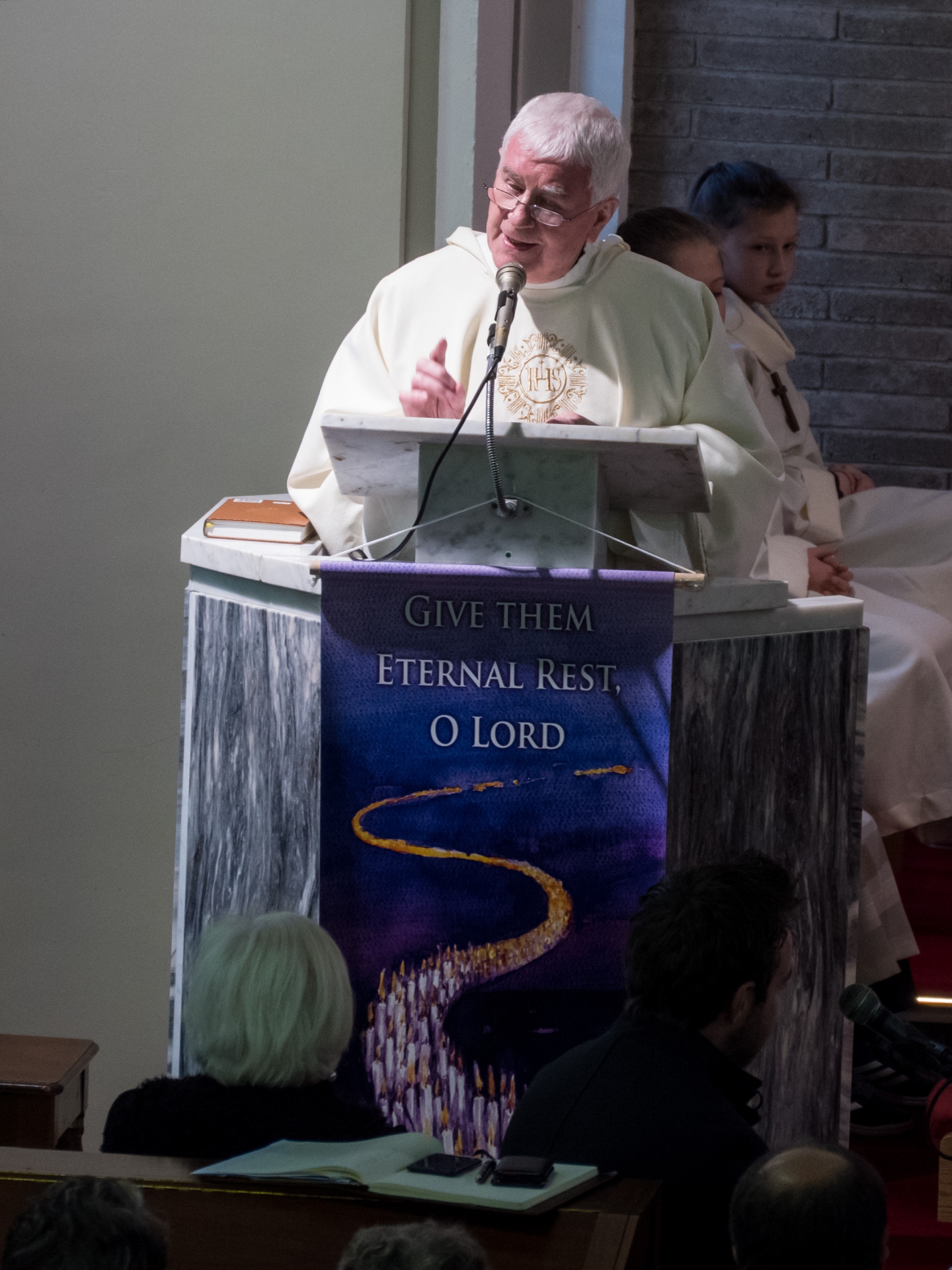