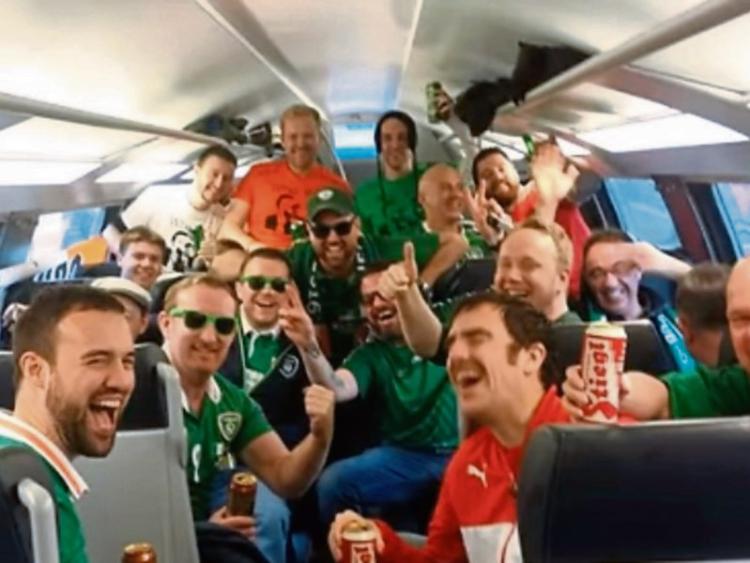 John Paul Wright with his friends on the way to Copenhagen

The Kildare man who penned the Euro 2016 anthem – ‘Dance in France’, is back with another soccer inspired tune in advance of Ireland’s World Cup play off with Denmark in Copenhagen on Saturday.

“I wrote the ‘Dance in France’ song for EURO 2016 which came second in the RTE Soccer Republic competition, and an Irish radio station asked me if I was going to Copenhagen for the match, and if I’d write another song, I am, and I did, sang by another Kildare man Tom Tuohy,” said John Paul Wright from Coill Dubh.

John Paul runs an Irish pub in Salzburg, Austria. His Euro song’s success hurled him into the international spotlight earning him a video blog on Sky News.

When interviewed by Leader last year, he was asked if he had any previous musical experience.

“I have never played in a band, most of my family can play musical instruments and my dad Johnny played accordion. I always loved music but my real passion is linguistics, now I can speak fluent Spanish and German, basic Italian, Russian and Polish.

“I can do about 25-30 different accents, so this is where my talent lies I suppose, I wrote a few poems but never a song.”

John Paul runs the pub, Murphy's Law where the song was requested almost every night during the Euros as soon as the video made its debut. The customers used to jump out of their seats to perform the “Dance in France” as soon as the music came on.

Check it out below

Speaking at the time, he said; “I had never imagined it would get so big, it just came into my head as I was waiting for a beer delivery,”he said.

Timahoe man, Tom Tuohy composed the music to go along with the lyrics.

“I have known him for 25 years, he is one of my best mates and a brilliant musician and has written songs for Christy Moore,” explained John Paul.

The Coill Dubh man comes back to Kildare about three times a year.

“I usually work it out way in advance so I can see Ireland play a home game and then I have a few days to spend with my friends and family.

“Brian Henessy from Coill Dubh goes to almost all the away games with me, and Trevor McLoughlin from the Coill Dubh soccer club goes to the home games. I take my nephews - Christopher from Allenwood and Cian and Shane from Suncroft to the games - I think its important as they will be the next generation of Ireland fans.”