Extending the hand of friendship to Argentrré-Du-Plessis 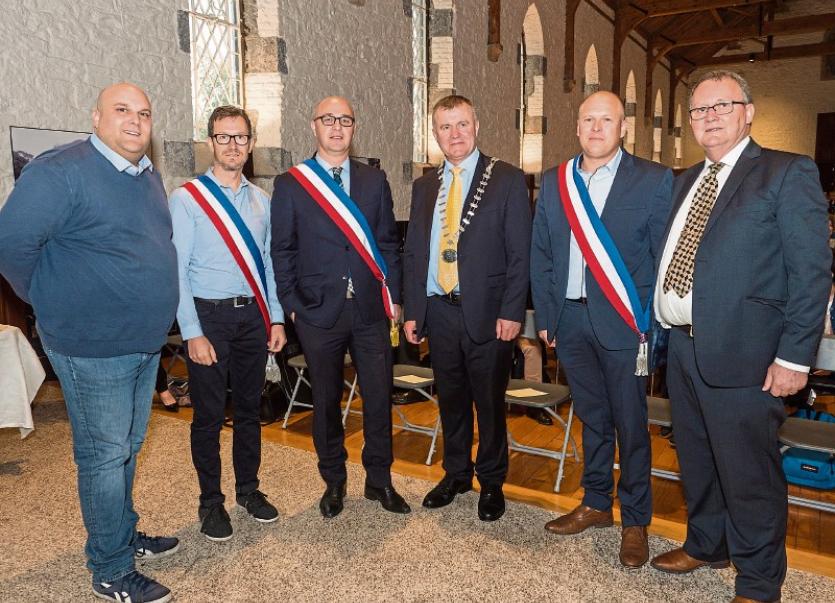 The Twinning delegation with local representatives

History was made last Saturday morning, when Newbridge and Argentré-Du-Plessis cemented their friendship by signing an official twinning agreement.

The French arrived in Newbridge to sign their part of the protocol and make official the twinning that has been running for more than five years.

Representatives from both sides put ink to paper at Newbridge Town Hall.

The unofficial twinning with Argentré first began five years ago when two rugby fans, Noel Heavey and Loïc Méhaignerie, struck up a friendship at a Leinster match, which in turn led to a visit by Newbridge RFC to Argentre’s annual festival held at the end of August.

Some took up the offer to stay with local families who in turn have since hosted visitors from Brittany.

In the last couple of years there have now been regular visits back and forth with musicians from Newbridge performing in Argentré and the visitors taking part in the Newbridge St Patrick’s Day parade.

Speaking about last weekend’s event, Mr Heavey said; “it was a really postive experience for all concerned.

“It was an example of two local authorities and two different groups in two different countries coming together in a positive way that brings joy to so many people.”

A programme of events was planned for the weekend, including a visit to St Brigid’s Cathedral in Kildare town, Solas Bride on Tully Road and a Hallowe’en party at Newbridge Rugby Club.

Located 30 minutes from Rennes, Argentré is close the medieval town of Vitre and is a great location from which to visit places such as St Malo, Dinard and Dinan.