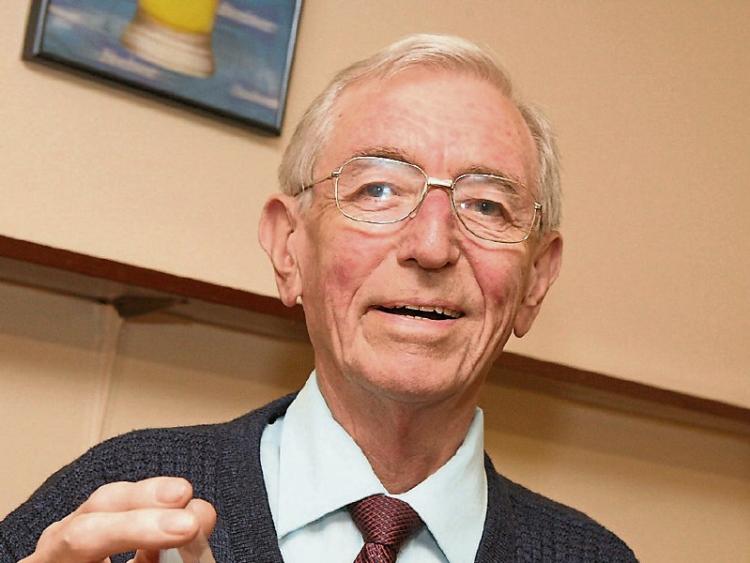 The late Patrick Kelly was a well liked and respected gentleman who loved his family, his faith and his golf.

Mr Kelly was the proprietor of the Castle Inn in the village of Carbury, so named after the nearby Carbury Castle in whose shadow it stands.

Born in Allenwood, he served his time — in fact, he paid to serve it — as a carpenter before spending a number of years in England.

He married his wife Sarah over there, before returning to Ireland, to Carbury, relatively close to his home. He was predecased by his wife.

According to Fr John Fitzpatrick, who celebrated his funeral mass in the Holy Trinity Church in Derrinturn on Wednesday, September 20 last, Mr Kelly bought the Castle Inn when he arrived home.

He had moved back, he said, to be nearer his family, which was very important to him.

“He wanted to be surrounded by his family. He loved nothing better,” Fr Fitzpatrick explained.

Known as ‘Ackie’, he had three sons — John, David and Paul — and two daughters, Patricia and Vanessa.

They join his sister Kitty, brother John, grandchildren, great-grandchildren, nieces, nephews and extended family, relatives and many friends in mourning his passing.

“His faith was terribly important to him,” Fr  Fitzpatrick said.

“It meant a lot to him when he was annointed by Fr Murphy in the hospital.”

Mr Kelly was best known as proprietor the Castle Inn, and had a keen love of  card games, especially 25  and poker, for which the friendly pub is known.

One review of the pub described it as “a wonderful family-run pub in the picturesque village of Carbury, where a warm welcome, great service and friendly banter at the bar on everything from tractors to Liverpool FC”.

The pub was also the setting for a short film made by local man Alan Lawlor. ‘Ordinary Man’ was filmed in the pub and even premiered there.

Mr Kelly was also a huge fan of golfing, so such a degree that it was said he “lived for it”. He died peacefully and surrounded by his loving family at St  James’s Hospital, on Sunday, September 17.

He reposed at his daughter Vanessa’s home last Monday before a huge crowd attended his funeral, a testament to esteem in which he was held.

He was, Fr Fitzpatrick said, “a very well liked and respected gentleman”.

Following mass in Derrinturn, his remains were interred in the adjoining cemetery.

To have an obituary for a loved one featured in the Leinster Leader, please contact 045-897302  or email: editor@leinsterleader.ie. There is no fee for publication.