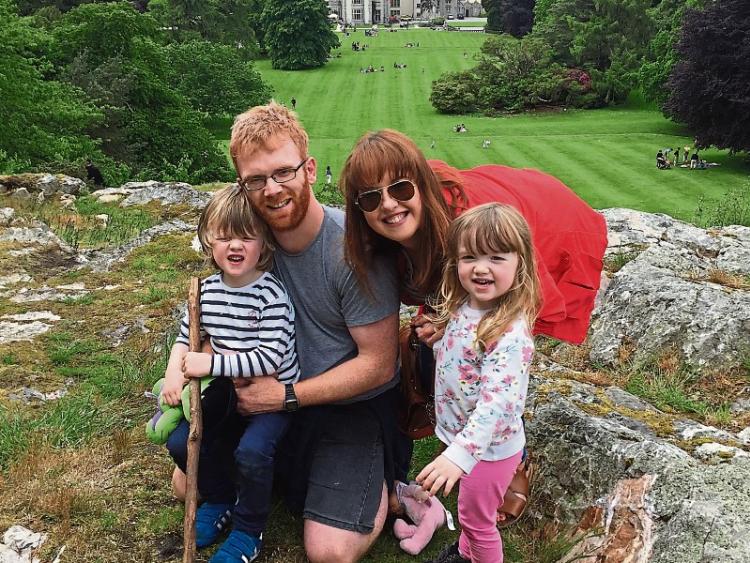 I suffer from a stress and anxiety disorder and it all came to a head last October. I was working from home one day and I felt horrendous.

I woke up every day and in my head I had a picture of how the day was supposed to go. If it veered off course, even in the slightest way, I couldn’t handle it. And anyone with children knows that things very rarely go to plan; children don’t do what you want all that very often.

A lot of days I cried. I cried because I couldn’t deal with all that had to be done. If I decided I needed X, Y and Z done, they had to be done, even if that meant getting no down time at all.

I cleaned the house almost every minute I was in it. I got stressed if the kids messed it. I took it out on them. I freaked if they looked for a cream cracker after I had vacuumed the floors. I hid toys that they loved because they were messy.

I constantly planned excursions with the kids because when they weren’t in the house they couldn’t mess it on me. And when they did mess it, they were afraid of my reaction.

So much so that one day I was called in to Aidan’s playschool. They were a little concerned that he was constantly looking for reassurance. If he dropped a toy in his class room, he jumped and immediately apologised. The child was apologising for being just that, a child.

Frustration consumed me. I couldn’t deal with Aidan and Sarah acting up at all. I was tough on them and every single day I felt so, so guilty for it. But I couldn’t stop it. I felt like a shit mother. My head was telling me I was ruining their childhood. My stress and anxiety was
affecting them.

Everyone was walking on eggshells in the house. Daddy Chambers was afraid to say things to me for fear of my reaction. Fear of my overreaction.

My head was telling me that Daddy Chambers was no help around the house. My head told me he was happy to let me do everything and then get stressed because I had to do everything.

I didn’t have to do everything. Far from it. Himself is genuinely amazing around the house and with the kids. He always has been.

My head thought that what he was doing wasn’t the right way of doing things though. I thought he was having a go at me when he wasn’t. I took everything personally.

I got my knickers in a twist about everyday things. I was utterly obsessed about getting places on time.

If I was running even a tiny bit late I actually broke out in a sweat. I got super flustered. In most cases the reason why I was late was just normal things with the kids; they couldn’t find their shoes, they couldn’t find the toy they wanted to bring or Aidan needed the loo just as we were about to go out the door.

I may have only been going to Tesco to pick up a few supplies, but my head had told me the plan, you see. It said I had to leave at a certain time and be back at a certain time even on days when I had no other plans or didn’t have to be anywhere else.

I wasn’t nice to some people. My relationship with my mother was at an all time low. She was the same great mother she has always been but my head let things she did drive me insane.

I was a bitch to certain people, a passive aggressive bitch.

For the most part I kept how I felt under wraps. Apart from Daddy Chambers, only one or two friends knew how I was feeling.

Only one of those actually witnessed me in full stress and anxiety mode regularly — I hid it from the rest.

The strange thing about it all was that I knew the way I was carrying on wasn’t right and that it wasn’t normal, but I couldn’t stop it.

Funnily I wasn’t in the slightest bit unhappy with life. In fact I felt so happy to have a great husband, two beautiful children, a secure home and a job I enjoyed. For months I promised myself I would sort it out. I promised to get better. I even made an apportionment with a counsellor but she had to cancel the appointment and I never re-scheduled.

Then came that October day. I woke up and shouted at the kids. I made them cry.

I got them off to the childminders and came home and cried myself.

I couldn’t do it any more. I needed help. I chanced my arm and rang my GP for an appointment.

An hour later I was in his office. I bawled crying as I told him everything. He listened. It was such a relief to be there. He told me I was suffering from stress and anxiety.

He prescribed me an SSRI (Selective Serotonin Reuptake Inhibitor). A happy pill. An antidepressant.

I left feeling like a weight had been lifted off my shoulders, but I was worried too. Worried about taking happy pills. I told myself that I’d tell nobody about it, only a select few.

I never went for CBT. Why? I couldn’t afford to. Simple as. If you are a parent reading this you’ll understand that.

I’m lucky, the SSRI prescribed for me worked. It worked quickly too. I didn’t feel happy or high, I just felt normal. Like me of old.

My kids had a mammy they wanted to be around. They could eat cream crackers in peace and play with Play-Doh. I didn’t rush anymore. I didn’t freak out if I didn’t put on a pile of washing every day. I vacuumed once a day, after the kids went to bed, instead of ten times a day. We stayed at home and played. I listened to them and realised a cup of spilled juice can just be wiped up with kitchen paper. None of it was a big deal anymore.

The visit to the doctors was 11 months ago. I’m not taking the SSRI anymore. He always said he would only prescribe it short term and he was true to his word. I’ll admit I was as nervous as hell about that. Would irrational me return once I came off it?

I’m pleased to say no. The past few months put everything in to perspective. I was sweating the little things before. I don’t now. I am human and the kids drive me insane some days but that’s just life, isn’t it?

Aidan has changed dramatically since too. He’s a much happier little boy now that he can be himself at home.

The playschool noticed a great change in him. In fact everyone close to him has noticed the same. My relationship with my mother is great again. My sense of humour is back. I am in a good place.

I’m not sure where all the stress and anxiety came from.

I don’t think I ever grieved properly after my father died seven years ago; I felt good after Aidan was born but my stress definitely escalated after Sarah was born.

I put it down to going from one to two children. Perhaps it was Post Natal Depression. I don’t know. All I know is I feel good again, like a normal functioning human.

I didn’t write this to advocate the use of SSRIs. It’s just my story of my stress and anxiety. If you’re reading this and feel the way I did, there is light at the end of the tunnel. That’s all I want you to know.