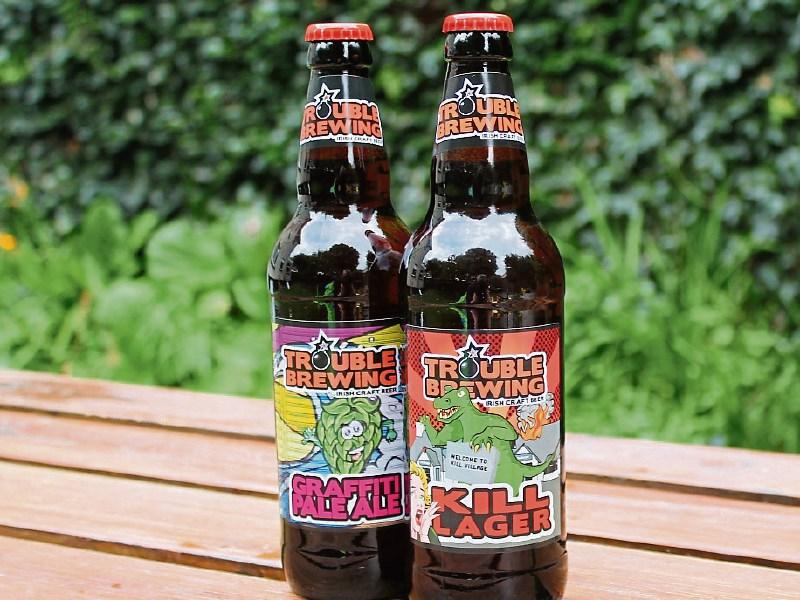 The Graffiti Pale Ale and Kill Lager which won one and two stars respectively at the Great Taste Awards.

Trouble Brewing, from Kill, has won two awards at Great Taste, considered to be the world’s most coveted and prestigious food awards.

As well as a badge of honour, the black and gold Great Taste label is a signpost to a wonderful tasting product, which has been discovered through hours and hours of blind-tasting by hundreds of judges.

“This was the first year that Trouble Brewing entered the Great Taste Awards and we were delighted to win awards for two of our beers on our debut,” said Paul O’Connor, co-Owner of Trouble Brewing. “Especially since a Great Taste award is one of the largest and most trusted awards a food or drink producer can receive.”

“We were feeling confident about how well both beers would do, as both had won awards for us previously, Kill Lager had won medals in the Dublin Beer Cup and the Killarney Beoir Awards, while Graffiti Pale Ale won a Blas Na hEireann medal previously,” Paul explained .

“We’d forgotten to look out for the results, as we’re generally very busy with the brewery near capacity at the moment, so when we got the call about the result, it came as a pleasant surprise.”

Trouble Brewing was founded in 2010, and was originally based in Allenwood.