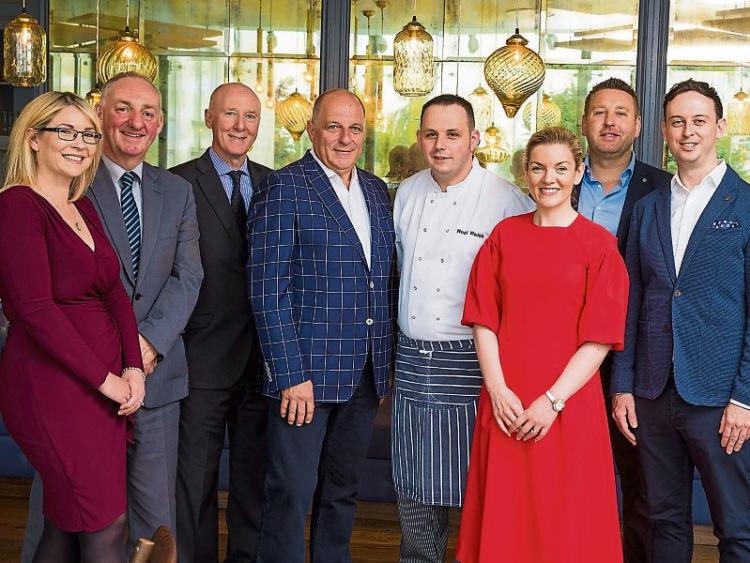 Fifteen new jobs have been created as part of a €3m investment at Naas’s Osprey Hotel where it today launched a new restaurant with the help of RTE’s Home of the Year presenter, Hugh Wallace; Cian O’Neill, Kildare Football Manager and Kildare County Manager, Peter Carey.

The men met the team at The Osprey to enjoy a celebratory slice of cake to mark the opening of the hotel’s brand new 130-seater all day restaurant.

Mr Wallace, who has over 30 years’ experience in the interior design and architectural industry, was drafted in to transform the Osprey’s former brasserie into the light-drenched and comfortably modern space.

“Myself and my team were delighted to be involved in this project. The Osprey Hotel is a landmark property in the heart of Kildare. The new restaurant Herald & Devoy will be a fabulous space for guests and residents alike. We wanted to create an elegant bistro feel that took its inspiration from the huge glazing that was already a hallmark feature of the property,” he said.

“This glazing together with the spectacular outdoor water feature inspired us to utilise reflective services and a mixture of tactile materials. We hope people will really enjoy dining here as much as we have enjoyed designing the space.”

Another well-known name involved in the venture is food consultant Hugo Arnold, known for his work on bestselling cookbooks such as the Avoca range and Wagamama’s cookbooks.

Mr Arnold said: “Noel’s touch is both assured and confident with a distinctly modern edge. This is the kind of menu that suits early and mid-week diners as much as someone looking to celebrate at the weekend. The large, airy stylish space Hugh has created brings a real sense of occasion regardless of whether you are eating a sandwich, burger, or a super large steak (or even just enjoying a cup of tea).”

Head Chef Noel Walsh is heading up the kitchen, and with 14 years of experience behind him.

“I am really looking forward to cooking our new dishes. We have spent a huge amount of time preparing our new menus which we feel have something for everyone.  Many of the dishes will take a modern twist on old classics but ultimately, what we will serve will be really good food that everyone will enjoy.”

Owners of the four-star Kildare hotel, PREM Group, launched the brasserie which is part of an overall €3m investment into the Osprey.

The new look restaurant and lobby area is completely open plan and contains a bar at its heart which is embellished with tiny, bronze mosaic tiles.

The seating areas have been arranged to take advantage of the views of the spectacular outdoor water feature.

The restaurant’s name is a tribute to John Devoy, an Irish rebel leader, as the Osprey Hotel is built on the old Devoy Barracks site, which was named after him.

When Devoy moved to the US he worked for the New York Herald newspaper which has led to the name, ‘Herald & Devoy’

The PREM Group, who have owned the hotel for the past two years, are involved in various other projects in both the UK and Ireland including Tulfaris Hotel and the Cahernane Hotel.

“It’s been a lot of hard work by all of our team to bring this project to fruition,” said Peter Brennan, the hotel’s General Manager.  “We are thrilled with the result and look forward to welcoming our many guests, residents and friends to dine here at Herald & Devoy.  We are happy to bring more choice to Naas and of course creating jobs is always a bonus”.