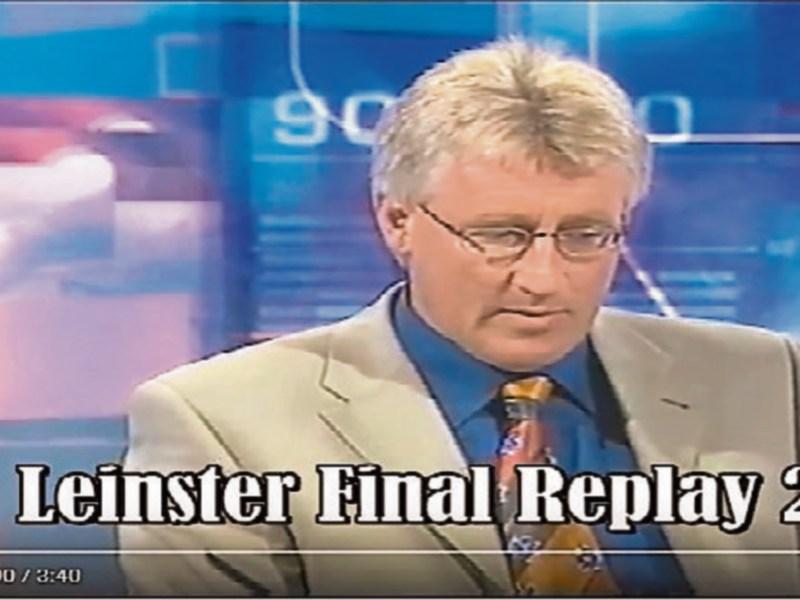 Pat Spillane on the Sunday Game in 2000

It was the biggest attendance for a sporting event anywhere in the world that day.

I remember being told that in Croke Park in 2000. It was half-time in the replayed Leinster final and Kildare were in rapid retreat against Dublin in front of what sounded like a sort of world record audience.

We were sat in what used to be the Canal End but had been recently renamed The Davin Stand. Gone were the red flares, the big black scoreboard and the sunroof sky of previous seasons.

All that could be seen from under the towering shade of the stand was the wisp-like Collie Moran weaving through a blanket of white jerseys and kicking points into the Hill.

“Seven pounds please friend” declared Tom. "And there will be NO toilet stop until The Big Tree."

But the weather was so good we decided to give The Big Tree a miss, got a carry out and sat up beside the canal lock on Dorset Street.

It was sweat-box warm like that Bagatelle song about the Liffey stinking like hell in summer and we nearly ended up in the shallow waters of the lock, down among the trolleys and the traffic cones.

A group of tattooed Dubs had wandered down from the direction of the Auld Triangle to try and shake us down for a few cans.

There was some stiff refusal but whatever hope we had of winning the game, this was a fight that could end badly with us begging to be airlifted out of the bottom of the canal.

I met a neighbour shortly afterwards outside Quinns. He’d a similar run in with a few Dubs the night before. Only it was the case that he was after a woman that wasn’t his, rather than drink that didn't belong to him.

He thrust out his arm to show off an expensive looking watch. It belonged to one of the Dubs he said; came off his wrist during the scrap.  He spotted it getting up off the pavement, grabbed it and ran. That made me feel a lot better, until Collie Moran got on the ball.  He was killing us in the opening period.

At half-time someone leaned over from behind and said Pat Spillane was saying slanderous things about Kildare forward play on The Sunday Game.

‘He's there down in that studio by the Hill - the f**ker.’ 'We squinted hard to try to try and see.

I heard  Glenn Ryan summoned the Kildare team before the second half and said that if they kept Dublin to a point we'd win! Even Davy Dalton must have thought him certifiable. Then Micko sprung big Bryan Murphy and his young fella, Karl, from the bench.

Karl was in the thick of it at the restart and just like Collie Moran in the first  - but taller and with a much rangier running style - Dermot Earley cleared a path through the Dublin defence and was left with a one-on-one against keeper Davy Byrne.

This gasp of anticipation went up, the ball scuttled into the back of the net and then waves of deafening sound came crashing down.

‘F**k ye Spillane,’ came the shout from behind in a way that made it feel like we were playing Pat now and not the Dubs.

And before we gathered our senses, Murph had ended up picking up and running off with Davy Byrne’s kick out.  It felt like yer man with the watch.

So we stood on our tip-toes 110 yards away in the Davin Stand and watched Murphy's stumbling running trajectory as a mob of Dubs chased him towards the railings of the Hill until a blue jersey straightened him up with a shoulder.

Murphy swivelled  passed to Tadhg Fennin who was born of a school more slippy than even Jason Sherlock.

He picked his spot and blasted to the top of the net.

Even writing about it now makes me feel I want to jump up and take off down Dorset Street in the name of revenge.

There was still 33 minutes to go in the second-half but that  Fennin goal had turned a baying mob of blue in the Hill into a silent blob and that’s some day's work for Fennins, a then Bank of Ireland teller.

After that the Dubs couldn't string a pass together while Tom had to string plenty of stops together on the way home.

I remember thinking that making work the  next day would be an  enormous uphill challenge that faced Kildare at the break.

And when work did  roll around there was Tadhg Fennin stood behind the counter in the Bank of Ireland in Naas cashing cheques, processing lodgements and playing down the goal that beat the Dubs to win Leinster, but almost looking terrified by it all.

“Jesus”, someone remarked. “And he playing in the biggest game in the world yesterday.”