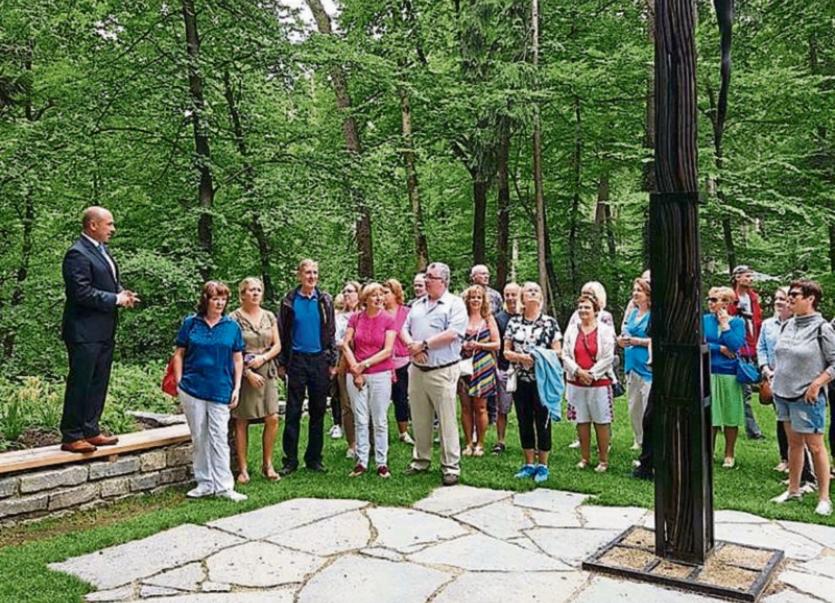 The 20th anniversary celebrations of the Twinning initiative with Bad Lippspringe took place last weekend, with a group of 77 Newbridge people travelling to the German town for an eventful programme of events.

“Quite a significant number were there for the first time and each one has confirmed that they will return again to our Twin Town in the future. The group was also accompanied by a team from Ryston Boxing Club led by Coach Tom McDermott and Newbridge traditional music group 'Cathu',” said Peter.

Bad Lippspringe was thronged with visitors for the State Garden Show, and over the weekend exceeded the 200,000 mark entering the Parks.

“Indeed the Garden Show was a highlight for many of our group too and a special reception, hosted by Burgermeister Andreas Bee, took place at the Irish Garden where the central feature is the 5000 year old Bog Oak sculpture with the Lily at the top,” he explained.

“This will remain here for many years to come representing Newbridge, the County of Kildare and our country in general. It is already generating interest from visitors with lots of questions on the Bog Oak and it's origins and there is no doubt that it will encourage people to look at County Kildare and Ireland as a place to visit.”

A presentation was made to Eberhard Kemper of a hand painting of swans on the Liffey and a decorated horseshoe was given to each committee member.

Tours of the Garden Show were arranged for the group, and also a tour of the town for newcomers with bicycles and Segways on offer, giving rise to great excitement.

“The Town Hall - 'Rathaus' has now a display of photographs from all over Ireland, including Kildare, taken by one of their committee, and a professional photographer,which represent every well known place of interest here and will surely encourage people to see Ireland as a place to visit,” added Mr O’Neill.

“Ryston boxing Club travelled with a number Leinster Champions in boys’ and girls’ weights, but had to give way to the German opposition, but it was an experience for them and their coaches. Accommodation was provided by the Bad Lippspringe committee.”

Musicians Cathu' featured at the 20th anniversary celebration evening and again at a concert, which took place in the Garden Show Park with a very large attendance.

“Their performance was so good that Burgermeister Andreas Bee has invited them back for 2018,” he added.

“During all of this the one thing that always came through was the friendship created within both towns and we only need think of the number of young people from Newbridge who have been to Bad Lippspringe over the 20 years from youth groups, scouts, skateboarders, Patrician Band, football teams, KYT,  traditional musicians, Patrician Secondary School students who travelled to research language and job opportunities, and the huge numbers of individuals young, and not so young, who have visited on trips organised by our Twinning Committee,” said Mr O’Neill.

Earlier this year, over 60 people from Bad Lippspringe were in Newbridge for an extended stay.

Mr O’Neill pointed out a significant amount of money was spent by the visitors in local hotels, shops, restaurants, pubs, National Stud and gardens and their highlight on that visit was the reception in the newly refurbished Town Hall for the 20th anniversary celebrations.

“Both committees now look forward to another 20 years of new projects and ideas and with the support of our Municipal Authority and County Council and all supporters of Twinning in Newbridge the future will be a bright one,” he concluded.