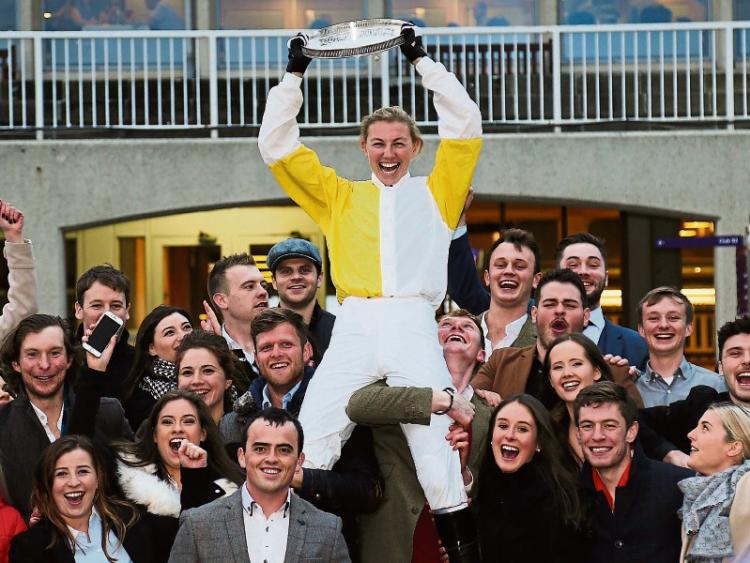 Lynne McLoughlin, a member of the Jessica Harrington team based in Moone, is one of fourteen jockeys taking part in this years Irish Injured Jockey’s Charity Race Series.

The riders will ride over three top class racecourses in a bid to raise funds for the charity.

Last year the series raised over €120,000 for Irish Injured Jockeys and the overall series winner was Alice Kavanagh, a student from Kildare who is currently studying equine studies at CAFRE College in Enniskillen.

The first race will take place on July 16 at the Curragh over 1.½ miles on the Irish Derby track.

The second leg will be held on September 16 at Gowran Park over 1.½  miles and the final race will take place on October 22 over 1.¼ miles at Leopardstown on the Irish Champions Stakes track.

So far, the riders confirmed  to ride in the Corinthian Challenge are; Ms McLoughlin, a former British International Show Jumper, Tim Gredley; Sheikh Fahad Al Thani, a major owner, breeder and investor in Irish racing through his family's company QIPCO and Qatar Racing and who competed in the inaugural series last year; Louise Burnell, a Major in the British Army; Fiona Ahern, a student of UCC; Deborah Mangan, who works with Talbot Hotels; Paddy Woods, former Director of Phonovation; Killian McCarthy who works for SoftCo and competed in last year’s series; Alan Redmond, who is an equestrian artist and whose work is often seen at race tracks around the country; Cork resident Paul Devereux who works with Aramark; Patricia Newman, producer of sport horses, and Orla Donworth a graduate of Equine Science from UL currently working at Baroda Stud. Two more riders may yet be named and are awaiting assessment.

The riders will also receive additional help and training organised by the Irish Injured Jockeys alongside some of Ireland’s best-known jockeys including Ruby Walsh and Patrick Mullins.

Ruby Walsh, Chairman of Irish Injured Jockeys said, “Last year’s Corinthian Challenge was a great success and I think the riders themselves really enjoyed the camaraderie and the opportunity to ride on such famous tracks.

"We were really delighted by the support of the riders who took this challenge so seriously. They fundraised really hard and showed huge commitment over the three races. Many trainers and owners also hugely helped us by supplying horses for the races and encouraged our riders with great advice and support.’’

In order to race in the series the riders have a target of raising €10,000 each and members of the public can help their favourite rider by sponsoring them online or supporting various fundraising events over course of the series.

Riders profiles can be viewed on www.corinthianchallenge.com where donations can also be made.