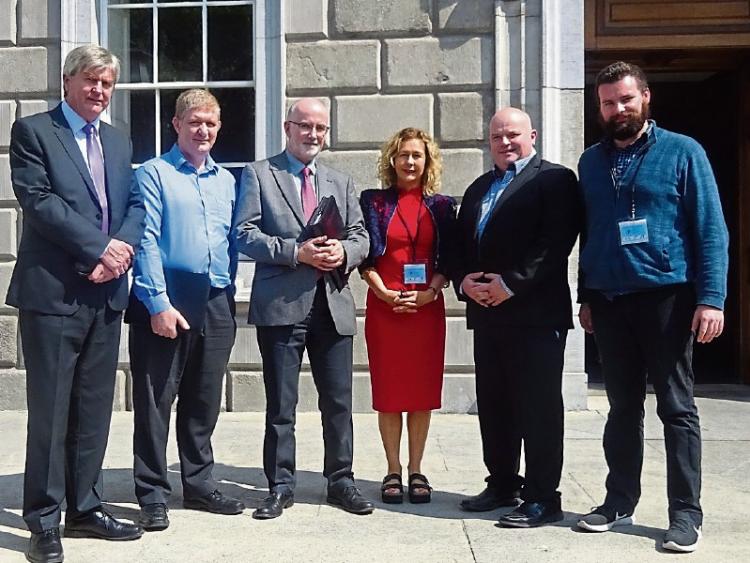 This follows more than two months of public campaigning as well as a targeted lobbying effort by the Kildare South Labour Party aimed at bringing about the reductions.

Speaking after the meeting, Ms Callinan explained that “Some really important progress was made at the meeting. We gathered valuable intelligence and discovered several promising fresh leads which our campaign will now act to pursue,”

She began the meeting by telling the NTA officials, Charlie Brophy an in-house economist and Tim Gaston the Director of Public Transport services, that she had been hugely disappointed with the NTA’s refusal to engage substantively with the material challenges facing Newbridge commuters to date.

She welcomed, however, the authority’s willingness to meet and to facilitate the meeting in the Labour Party’s rooms within Leinster House.

They raised the zoning inconsistencies that exist between various agencies of the state; inconsistencies internal to the NTA’s own pricing structure; definitional concerns around geography; and the negative knock-on consequences of the fare jump.

The delegation referred to consequences regarding traffic, parking, the environment and housing in particular.

The delegation also placed a special emphasis on the predicament facing students commuting from Newbridge.

The NTA officials were clear that the principal impediment to fare reductions is the potential loss of revenue they can sustain.

They also stressed that the ‘Short Hop Zone’ - a zone of commuter rail stations in which lower Leap Card fares apply - has to have a boundary somewhere. That boundary is currently set at Naas and Sallins.

The officials emphasised the importance of avoiding the creation of any new zoning anomalies or the establishment of any new unintended pricing precedents.

However, the NTA also made a number of important concessions.

They accepted that rail users traveling from stations located just outside the boundary of the ‘Short Hop Zone’ had a legitimate grievance.

They also accepted that a fare structure that served to incentivise commuters to drive rather than take more sustainable forms of public transport was ecologically counterproductive.

Following on from the engagement, the NTA agreed to undertake a number of specific pieces of work and will investigate potential changes to its pricing structure.

Ms Callinan said she felt the meeting had represented “a hugely encouraging and very positive engagement.”

She said she thought the NTA officials had demonstrated “real good will and a genuine, empathetic understanding of the situation facing Newbridge commuters.”

“The meeting has generated some really interesting new angles and fresh leads. Our delegation has a lot of work to do now in pursuing all of them. I think, though, there is real reason to be optimistic about outcomes” she said.