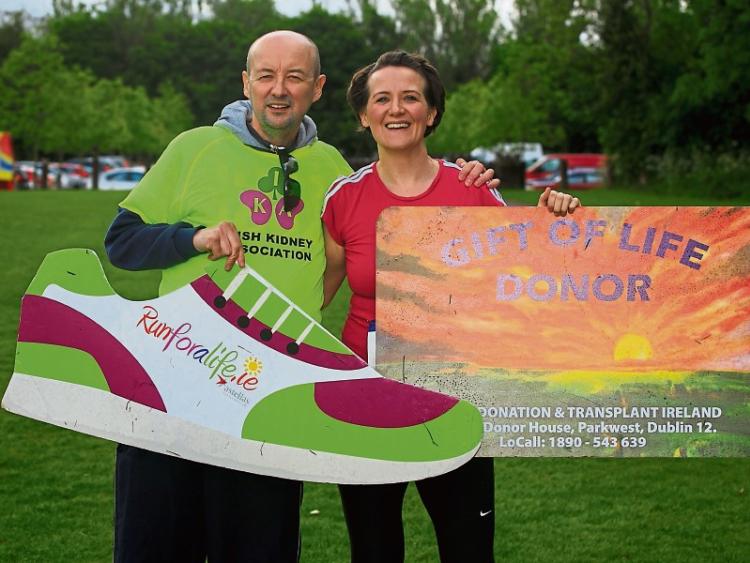 Gerry and his sister Nicola, who donated a kidney to her brother just six weeks ago

A Naas brother and sister were among the hundreds of people who turned out to support the IKA ‘Run for Life Family Fun Run’ last Saturday.

Taking part just six weeks after undergoing a living donor kidney transplant were Nicola McKenna who donated a kidney to her brother Gerry. A natives of Clones, Nicola is now living in Lusk and Gerry is living in Naas.

Despite the inclement weather a record 566 people supported the annual family fun run.

The registered charity fundraiser, which is now in its 9th year, celebrates the ‘gift of life’, and aims to raise awareness about the vital importance of organ donation and transplantation.

The Curran family from Prosperous supported the fun run as 9 year old, Nevin Curran, will require a kidney transplant in the near future.

His mother, Edel Browne Curran, explained, “Nevin was just four years old when our world was turned upside down. As a busy mother who worked with Spinda Bifida patients who can suffer from kidney disease as a consequence of their condition, I was shocked when kidney failure had come to my own doorstep.  Within the space of just a week in March 2012.

“Nevin went from being a happy normal playful 4 year old child to being close to death’s door and on 24 hour oxygen supply.  His organs began to shut down. At its worst stage it looked like he would not recover and we were asked to consider organ donation. Miraculously he made a comeback.

“However, he had eight months of hardship with hospital stays and emergency visits to Crumlin Children’s Hospital. A kidney biopsy revealed he has a rare chronic kidney condition, Nephrotic Syndrome (FSGS), similar to that which the late Jonah Lomu had as well as former premiership footballer Andrew Cole.”

Edel explained that Nevin will require a kidney transplant in the next few years.

“Nevin has never returned to full health but is a really positive boy. He continues to take strong medication including steroids and has had some chemotherapy to keep his condition in remission. Our lives are not the same anymore as Nevin is not the healthy child he used to be.

“Several members of our family including myself, my husband and cousins are willing to donate a kidney to Nevin when the time comes. We’re delighted to have taken part in Run for a Life and support the Irish Kidney Association and its work in spreading awareness about organ donation and encouraging people to have that important family discussion. I walked the 2.5km distance with Nevin and my husband David, my mother Kathleen Browne and our two children and nieces also took part”.

Another Kildare family who who were delighted to attend were the Casey Family from Clane, Kildare including parents Alison and Peter and children Aaron (13) Rebecca (15) and Sorcha (10). Alison underwent a liver transplant at St. Vincent’s University two years ago.

Speaking at a photocall in advance of Run for a Life, popular RTÉ broadcaster Ray D’Arcy, an avid runner said, “It is thanks to living and deceased organ donation and our heroic medical teams that close to 3500 people in Ireland are enjoying a second chance at life after receiving heart, lung, liver, kidney or pancreas transplants. I would encourage families to take part in Run for a Life on 20th May in what is a celebration of life”.

For organ donor cards Freetext DONOR to 50050 or visit website www.ika.ie/card  You can now download the IKA’s new digital donor card by visiting www.donor.ie on your smartphone. Your wishes to be an organ donor can also be included on the new format driving licence which is represented by Code 115.