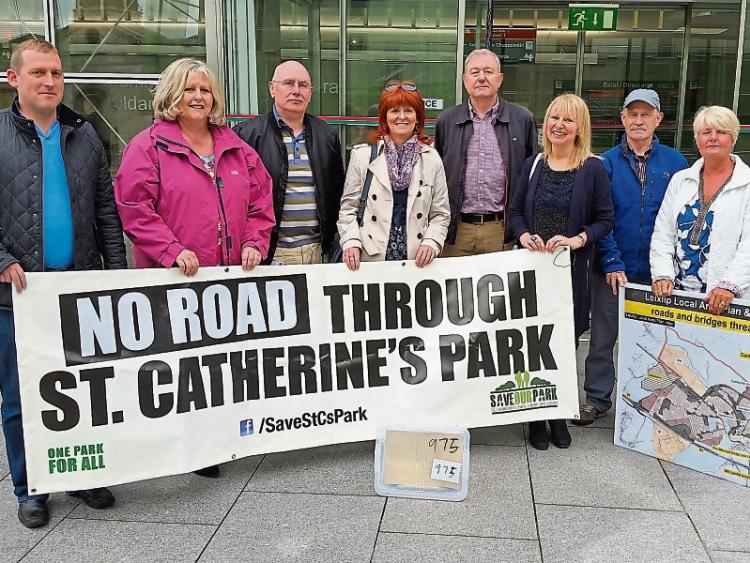 The committee handing in the submissions

The Save St Catherine's Park campaign arrived at Kildare County Council headquarters in Naas at 11am today to present 975 submissions on the Leixlip Local Area Plan before the deadline at 5pm.

These submissions call for no road through St Catherine’s Park.

Valerie Colton, Chair of the Campaign, said: “Just under 1,000 people have written these submissions calling for a road through the park to be dropped – with many more sent online. People are realising that the Confey plan for thousands of houses can't work without a road to the motorway. The only option laid out is shown going through our park.

“People are angry that Kildare councillors could decide to proceed with a masterplan for this without telling us where a road to the motorway would go. We know they have been informed that transport consultants proposed a road from Confey to link up with the proposed Fingal road to the M4 through St Catherine's Park.

“We're telling the councillors that people from a wide area of Kildare, Fingal and South County Dublin just won't accept any of it – and neither should they. This park was built for everyone and should remain as one whole park with no exceptions or divisions.”

Campaign Secretary, Ann Field, said: “Fingal planners tell me that the road shown on their map going from Ongar to the M4 at the Leixlip Interchange, going directly through St Catherine’s Park, is only 'indicative' and nothing is decided. But that’s not true. They’ve already got Fingal councillors to vote for it – without showing these councillors the park on their planning map which omitted the outline of the park. I feel this was deceptive. No residents were consulted or shown this planning map either.

“Residents from Leixlip and Lucan provided Fingal Council with funding for this park’s development and feel very betrayed and angry by both Fingal and Kildare Councils.”

Campaign Organiser Declan Kenny said: “It’s obvious that the only planned route from a new Confey development is to link to Fingal's proposed road to the M4. They do not present an alternative. Any planner or councillor who thinks we don't realise that must be delusional – and more delusional to think we'd accept it.

“Kildare planners want their 40 councillors to vote for a masterplan that they have not seen. There should be no masterplan for Confey as it results in a road through St Catherine’s Park, which is not acceptable in any form or at any time.”