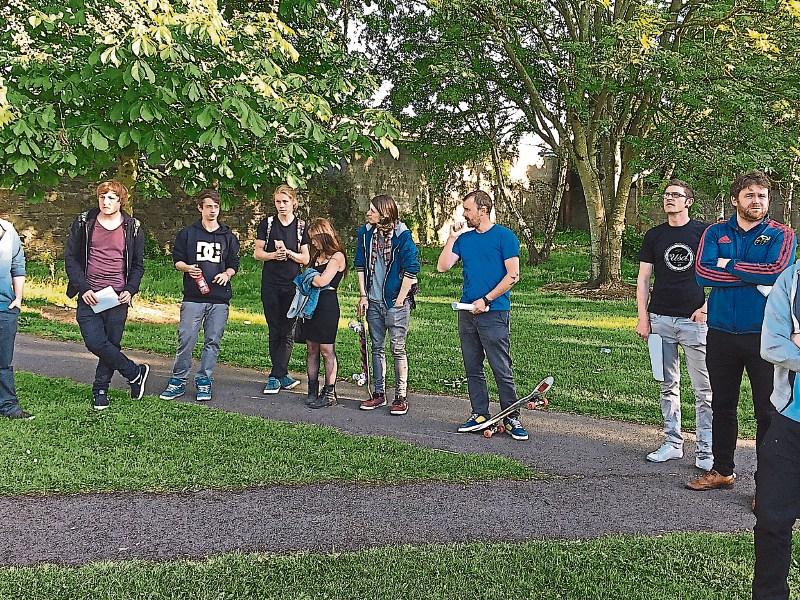 Some of the skatepark campaigners during the site selection process

After 20 years of campaigning, the Newbridge Skatepark moved a step closer to reality today, after councillors approved the project.

All the Newbridge Kildare Municipal District local representatives voted in favour of the proposal except for Cllr Paddy Kennedy (Ind).

The skatepark will be located across from Dunnes Stores at the green area beside Woodies car park on the Moorefield Road, Newbridge.

Some local residents have come out against the park with fears it will bring anti-social behaviour, graffiti and illegal parking.

The skatepark campaigners say this is not the case as the park will be overlooked by a busy road and can be viewed openly, ruling out possible anti-social behaviour.

The plans went on public display before Christmas and the submissions were due to be complied into a report.

This report came before the Kildare Newbridge Municipal District meeting this morning.

Parks Superintendent Simon Wallace told councillors there were 314 submissions – 255 in favour and 63 against the proposal. He said Moorefield Residents Association had also made a submission.

He said the council was satisfied the site was correctly zoned, it was a suitable location and was in line with County Development Plan policies.

The planners recommended the development be approved with nine conditions.

Cllr Mark Stafford (FG) said on foot of discussions with the local gardai, he wanted to include an amendment to include CCTV at the site.

Councillors supported the amendment, and all said they understood the concerns expressed by the residents of Moorefield Park.

They said the council should continue to monitor the skatepark, and address any issues if they should arise.

Cllr Kennedy said he never agreed the site was the proper place to put a skatepark, and he said it could pose a traffic hazard with people slowing down at the junction “rubber necking” to look inside.

Mr Wallace agreed that the park would be maintained on a weekly basis by the council.

He said CCTV often doesn't work in deterring anti-social behaviour, as it has to be monitored and people may not be identifiable from the footage. However, he undertook to come back to the council to discuss how it could be utilised.

He told the council that the next step in the process would involve the actual detailed design of the park in consultation with the skatepark group. He also pledged there would be no hiding places or dark corners which could attract anti-social behaviour.

Once the exact design is finalised, it will come back before the council again.